There are some old classic games out there and Yahtzee is certainly no exception! It originally came out in its current form in 1956 — quite a while back! However, as it is still around, it must have something going for it. Read on for our full Yahtzee review and you’ll soon understand why. 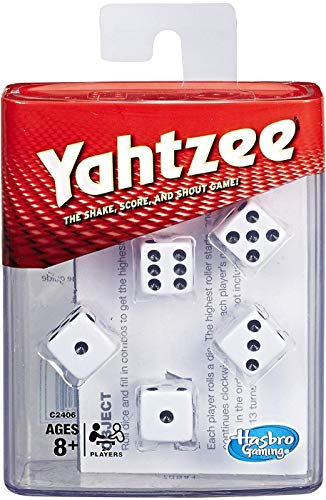 Yahtzee is considered a classic dice game. It is a game for 2-10 players – the number of players does vary in certain gaming communities, but that’s not a serious issue. The game consists of each player taking a turn to roll the 5 dice (up to 3 times) to get a certain dice combination.

There are only 13 turns per person in the game and a player will have to decide what type of combo they are going to fill into their scorecard. Once a specific combo has been selected, they cannot use it again in the game. The person with the highest total at the end wins!

There are a ton of different versions of the game ranging from Star Wars to The Hobbit. There is bound to be a theme that would interest every possible fandom.

Since there are so many versions, we are only going to talk about unboxing the classic Hasbro version. There is also another classic version that looks like it comes from the 1950s which we won’t discuss in detail — trust me, you’ll know it when you see it.

The box has a standard and classic look to it. The box is quite big for a game that only has dice. This version does also come with a small travel box inside – which strangely enough, still doesn’t explain the large box size.

In the box you’ll find:

How to Play Yahtzee

Yahtzee is a very simple game to learn to play. Perhaps that is why it has been around for so long and so many different versions have been made. There is literally no setup besides taking the dice of their container and getting a pen to write down the scores in the provided sheets.

There is a total of 13 turns that will occur. Each player will have a turn the throw the 5 dice to see what combination they can obtain. There are 13 different types of combinations that count for points – the better the combination, the more points achieved in that category.

Players will decide what combination they want their dice roll to fall within. Once that combo has been chosen, it cannot be used again or changed, even if a better roll happens later on.

If a player isn’t satisfied with the results of the dice they have just rolled, they have the opportunity to roll any number of dice up to 3 more times again. This is especially useful in the latter part of the game!

Yahtzee has been around so long for good reason, people enjoy playing it. The reason for that is because it was so adaptable to include a wide variety of interests. The basic idea on which the whole game is based allows for a good variety of themes to be used.  Surprisingly, the most popular version is the classic. 50 million copies can’t be wrong – right?

One particularly great feature is that it is inherently portable. There isn’t a slimmed-down version, it is already slim. And that has been used to full advantage – which is great.

As a dice game, there is always the factor of chance. Now, depending on how lucky you are or feel, the game could not be as much fun for everyone. We all know that one person who angered the dice gods and they know it – this game might not be as enjoyable for them.

Even with all the different themes, it won’t appeal to everyone. And that is fine. Not everyone is going to like every game that is out there.

I must admit one thing, it is slightly annoying when board games come with a large box and then have most of the space inside as empty air. It’s kind of like having a big packet of chips and then finding out that it’s mostly flavored air (you know what I mean). I think that the game could be packaged into a better box that would utilize the space better. It makes the game look far bigger than what it really is, giving a false impression.

Other Versions of Yahtzee

The classic game is the baseline for all other versions that are available. The difference is that a new theme was added and sometimes the dice sides were changed. Instead of having classic dice, theme symbols were placed on the 6 sides.

There is also a Junior version out that is aimed to include young children. However, there isn’t really an age limit on the game – as long as the player can understand what is going on.

Yahtzee is quite old and not the most innovative game around, let’s not deny that. Yet, it is great. It is just fun to play. Whether you are young or old, chances are that you will thoroughly enjoy it.

It has a very slight nostalgic feel to it like Rummikub and other old holiday games. But that shouldn’t dissuade anyone from it.

It is definitely not for hardcore board game fans, which makes sense, as it wouldn’t appeal to them. However, it is casual gaming in one of its most original forms that caters to almost everyone. Definitely, a game to consider.

We hope you enjoyed our Yahtzee review! What are your favorite versions of Yahtzee? Drop a comment below and let us know your thoughts on this classic dice game.