Today, we’re taking a look at the classic card game, UNO. Since its release in 1971, it’s given us countless hours of entertainment at home and on the go.

Without further ado, let’s find out the rules of UNO and how to play the classic game.

YOU MAY ALSO ENJOY: 5 Games Like UNO | Best Card Games of All Time | Best Classic Board Games

What’s in the Box?

This brings the grand total to 108 cards per UNO deck. 104 if you don’t count the blank cards, which are just there for house rules or card replacements.

UNO is easy to play and an overall fun family board game. That’s one of the reasons why it’s such a success and why you probably have a copy of it sitting somewhere in your house.

Shuffle all the cards together (not the 4 blank cards) and then deal 7 cards to every player. Place the deck in the center and flip over the first card to start the discard pile.

The object of the game is simple. Be the first player to play all of their cards and have an empty hand.

According to the rules, the player on the dealer’s left is the first player. This is pretty arbitrary so you can, of course, come up with your own first-player selection.

On your turn, you can play a card by matching the current top card of the discard pile. The card played has to be either the same color or the same number as the top discard pile. There are some special cards like the Wild cards that don’t play by the rules, but we’ll cover those a little later.

If you have nothing to play or simply don’t want to play a card, you can draw a card and end your turn. If you do decide to draw a card, and you picked up something you could play you can immediately play that card. You don’t have to though, and you cannot play any other card other than the one you just drew.

If you don’t have a card in your hand that you can play, you can simply draw a card and forfeit the rest of your turn. If you draw a card that you can immediately play, then you’re allowed to play the card you drew.

What if I don’t want to play anything?

You actually aren’t required to play anything. You could hold off and just draw a card. People typically do this if they want to save their Wild cards for their final card.

Shouting out “UNO!” and looking smugly at your friends and family is one of the best moments in the game. Alternatively, the best moment of the game is when they forget to call “UNO!” and you beat them to it, forcing them to draw 4 cards.

If someone notices and calls you out before the next player draws a card or plays a card, the player that didn’t call UNO receives a penalty of 4 cards. If it’s noticed after the next player’s turn, then they’re still safe.

The player to successfully place their last card wins that round.

Yes, there’s a scoring system built into the game. I honestly don’t think I’ve ever played a game of UNO where I’ve used it, though.

The object of the game is to score up to 500 points, and the first player to do so is declared the winner. The player who goes out first gets points based on what cards their opponents have in their hands.

This is where the magic happens… along with memes. The special cards in UNO are exactly what they sound like. They do something different that gives you an advantage and usually hurts your opponents.

Skip cards can be played on any color skip or a matching color. It skips the next player in line and the turn order continues as normal afterward.

Reverse cards can be played on any colored Reverse card or a matching color. This swaps the turn order. If you play a Reverse and play normally goes to the person to your left, instead it changes to your right and vice versa.

Draw 2 cards can be played on any color Draw +2 or a matching color. These force the next player in line to draw +2 cards and then forfeit their turn.

Wild cards can be played on any card. The player then switches the color in play to whatever color they want.

Wild Draw +4 cards work a little differently than the regular Wild cards. When played a player gets to switch the color like any other Wild card, but the next player also has to draw +4 cards, and then they forfeit their turn.

Here’s the tricky part though, the Wild Draw +4 can only be played if you don’t have a card matching the discard’s color. So, if the discard is a blue and you have a blue “3” in your hand, you can’t play the Wild Draw +4. As long as you don’t have the color in your hand, then it’s free to use, matching number and special cards don’t count, only color.

Stacking is when a player is hit with the effects of a special card but puts the same card down to kick the can down the road.

For example, if Player 1 plays a Draw 2, instead of Player 2 forfeiting their turn and drawing 2 cards, Player 2 can play another Draw 2 and the negative effects “stack” and move to Player 3. In this example, two Draw 2 cards were played and the effects stacked until they hit Player 3.

Part of the fun of UNO is trying all the weird versions that are out there as well as the unique rules that each one seems to have. UNO is like Risk in that regard. It has a ton of different versions that all play mostly the same, but each themed version adds 1 new quirk that makes it fun to play and worth collecting.

Star Wars UNO adds “The Force” card. It works like a wild, but you also choose an opponent and guess a color. If they have at least one card of that color in their hand, then they draw 2. 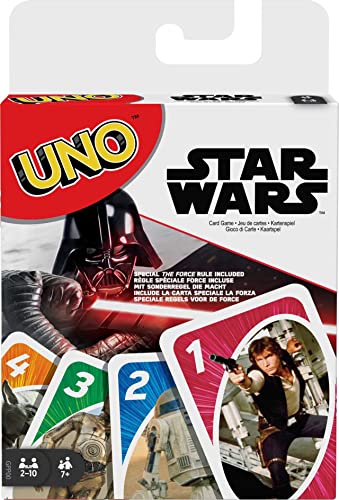 The Legend of Zelda UNO

The Legend of Zelda UNO adds the Triforce card that forces the next player to draw 3 cards. 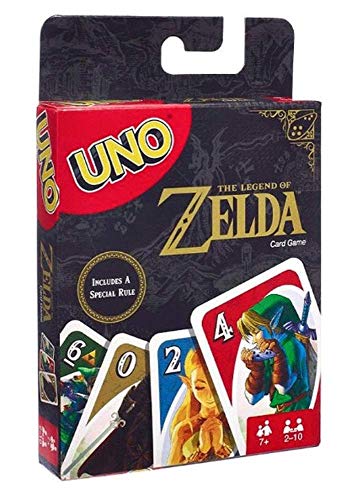 SpongeBob UNO has my favorite of the unique UNO variations. It’s the Super Absorbency card. Whoever plays the card forces the player with the lowest number of cards to draw a card from the person to their left, to their right, and one from the deck. It’s pretty brutal all around. 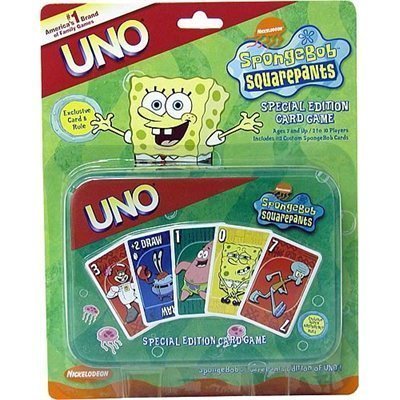 We hope you enjoyed our UNO review featuring UNO game rules. This classic card game has been around for decades and is still going strong. Have you played UNO before? Do you have any fun house rules that you’d like to share? Drop a comment below and let us know what you think! We’d love to hear from you.

Best Board Games for 2-Year-Olds