Now, thanks to the T.I.M.E Stories series, you can find out for yourself.

T.I.M.E Stories is a co-operative role-playing game series in which players travel through space and time to fix faults in the timeline. The narrative flows through a deck of cards, which get pulled out to represent the different facets of the game and decisions you can make.

The first installment, Asylum, which is included in the base game, is a chilling story set in an eerie French 1920s insane asylum. As a team, you’ll possess characters from different timelines and live through their eyes to explore various locations, coming up against all manner of multi-dimensional, thematic horrors, and challenges.

Happen to die along the way? Don’t worry, you can go back in time to when you were alive and try again. But don’t get complacent. There’s only so many Temporal Units to go around.

T.I.M.E Stories is an entire game series, with a bunch of expansions (or scenarios), you can buy that use the same mechanics. They all operate as a standalone game, however you’re advised to play them in order of release as there are a few themes that run throughout.

Each expansion is very different in terms of artwork style, reinforcing the fact that they are all their own game, which also really brings out the individuality of the scenarios. Of course, with the whole of time and space the play with, they have an endless supply of creepy adventures to choose from.

I would recommend this as the first expansion you buy. Not only is it the next installment after Asylum, but also probably one of the best. This time, your team finds itself in 1992 USA and something a little Dawn of the Dead is going on… 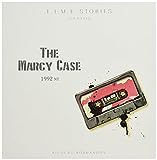 A Prophecy of Dragons

A big departure thematically from the expansions that preceded it, A Prophecy of Dragons is set in the Middle Ages. Only, unlike the real Middle Ages, this one has dragons… 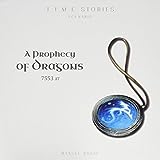 Brotherhood of the Coast

This piratical scenario takes you on a sunny vacation to the 17th century Caribbean. You and your band of buccaneering time adventurers set sail to save the timeline on the high seas. I hope you brought your sick bag. 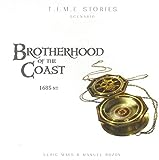 While this isn’t a legacy game, bear in mind that the card deck is just as precious. They’re numbered for a reason! The components you get with the game are:

T.I.M.E Stories is very noticeable in its design. The minimalist box might not be for everybody, but it certainly makes it stand out on a shelf of boxes that are usually visually very busy. It livens up when you get inside, with an interesting mishmash of white, sci-fi-style graphics and the dark, dank scenario you’ll be exploring.

I only really appreciated how great the artwork was when I started playing. The ‘panoramas’ you create with the cards to represent the locations look great. While the characters are also all really well done.

The rulebook opens with a charming introduction and explanation of the concepts involved. It’s a nice touch that umms and ars about how to categorize the game and some of the other concepts. However, I actually found this prelude to give the impression that the game was going to be a whole lot more confusing than it was. So, don’t get put off by this.

Another nice feature in the rulebook is the ‘saving’ page. Much like saving a video game, it advises you on how you can put the game away without losing your progress.

How to Play T.I.M.E Stories

In T.I.M.E Stories, you are given a mission that you must complete by the command center. Should you fail, you can go back in time and try again providing you still have enough energy (TU) left. Run out of energy altogether and you lose the game.

One of the core features of T.I.M.E Stories is its storyline, which is revealed as you play through. To avoid spoiling anything, I won’t be going into too much detail on this side of the game. Instead, here I’ll outline to core concepts that will be used in all installments of the T.I.M.E Stories catalog.

Similar to a legacy game, the storyline of T.I.M.E Stories is in a numbered deck.

The first few cards you take up are placed face-up on the table to create your command center. On them, you’ll find out the details of your mission.

In the deck, you’ll also come across:

An attempt at completing the mission is called a ‘run’, made up of two phases that succeed each other until you run out of TU.

The first phase is ‘Opening a location’. From the base, players move to a location of their choice by taking out its cards, keeping them face down. The first card is read aloud, and the others laid out alongside.

All players then decide whether or not they want to explore it. If they do, each gets to choose which card in the location they want to explore and can then read that card to find out what awaits them there (read about ‘tests’ below). This can be the same or a different card to other players.

Some cards might have certain conditions that need to be met in order to do so. For example, you may have to own certain state tokens, a special key, or have a specific receptacle in your team.

Then, in exchange for the team spending 1 TU, players get to take actions. They can choose to:

The team can decide they want to leave the location. This is the second phase. All pawns are returned to their players and then a new location is chosen. A dice is rolled to determine how much TU that location change cost. Then you go back to the first phase.

On turning over a location card, players will often be met with ‘tests’. These are challenges your team must complete, such as battling monsters, handling an awkward situation, or breaking in/out of somewhere. In return, you’ll get a reward.

These are resolved using dice. For every hit you roll, the test loses a shield. Once it is reduced to zero shields, you have won. However, you can also take damage to your life points, and further time penalties.

Those are the basic concepts covered. Now, your team will traverse the space-time continuum, visiting locations, tackling tests, finding items, and picking up rewards as you seek to complete your mission. Should your characters die or a specific situation cause the mission to fail, you can try again.

Your First Game of T.I.M.E Stories

The rules go to a lot of effort to encourage players to engage with the story and to discuss and debate with your team throughout the game. It tells you straight-up not to simply read out what’s on the cards you pick up, but to present it in your own words. And there’s a reason for that: it makes the game a whole lot better.

So, whether or not you’ve roleplayed before, make sure everyone tries to get involved with this side of the game. You don’t have to go full-on roleplay, but you should engage with the storytelling to get the most out of it.

When it comes to rules, I found the game to be very easy to get a grip on. However, there are a few bits that are easy to forget. For example, remember that visiting a location and reading its cards doesn’t cost you any TU. Only when you decide as a team to perform actions do you get docked TU. So, if you do find yourself in a challenging situation and just want to get out of there, you can do that without being penalized.

For me, the best thing about T.I.M.E Stories is the unearthing of the haunting story itself. The locations and challenges you come across on the way combine brilliantly with the theme and we had so much fun exploring new areas, items, and characters. The mix of puzzle-solving, narrative, and action felt a lot like some old adventure/RPG video games, like Zelda, where I was just as interested in how things pan out in the story as actually playing.

The co-operation and roleplaying elements really bring this out. By telling players to keep their cards to themselves and read them out in their own words, it forces people to take part in the story. You will find yourself sitting on the edge of your seat watching a teammate take a card, trying to figure out from their facial expressions the situation you’re about to find yourselves in.

But the engrossing story isn’t there to cover up a shaky game. The mechanics of T.I.M.E Stories, such as the dice combat and test resolution system, are straightforward, yet have enough moving parts to still require some deep thought. This simplicity is important as it means they don’t jar with the story itself, but instead let it flow interactively.

So, yes, it is a great story to follow. And no matter your gaming experience, I think all gamers will have a fun time unlocking it. But, for the hardcore roleplayers, it’s worth adding that it won’t quite reach the heights of some beefier alternatives. The lack of opportunity for character development, for example, was noticeable as each receptacle’s stats remain the same throughout. But that’s just the nature of the game.

Also, somewhat ironically for a game that’s built around going back in time and starting again, T.I.M.E Stories does suffer from a poor replayability factor. Once you’ve completed the mission and know the ending, you can’t quite enjoy it again in the same way. There are certainly multiple avenues players can take to get to the end, but once you know what’s coming, you’ll never have quite the same excitement from exploring it again.

T.I.M.E Stories is an engrossing, co-operative, and narrative adventure. Its haunting, immersive story will grab you by the scruff of the neck and not let go until you’ve uncovered every inch of it.

With smooth gameplay and accessible roleplaying, it’s let down only slightly by its extremely limited replayability. As, once you work out how to complete the mission, it can’t really be played again.

T.I.M.E Stories is an immersive and engrossing co-operative game that will easily be able to capture the imagination. The Asylums scenario in the base game is the perfect way to kick off the series, with a gripping yet unnerving narrative to work your way through.

Accessible enough for those not into full-blown role-playing games, but with enough twists, turns and depth to keep the hardcore fans happy, I think this is a brilliant adventure that everyone will enjoy.

While its finite replayability may put some people off, if you can afford to splash out on a game that can only be run through several times, then this is well worth it.

The board may only have a limited lifetime. But the experience is timeless.

Have you tried T.I.M.E. Stories before? Drop a comment below and let us know what you think about this unique boardgaming experience.