Teotihuacan is an ancient city located in modern Mexico, one of the most significant architectural findings in the world. The Avenue of the Dead leads to the Pyramid of the Sun, but 2,000 years ago it was a monumental construction site.

Teotihuacan: City of Gods is set during the development of the city with the pyramid at its center. As the city’s architects, players will have to manage their workforce, construct housing and work on the great pyramid.

Teotihuacan: City of Gods is a complex strategy game that can be better described as a point salad worker placement game. Instead of meeples, you’ll use dice as workers, a concept you might be familiar with if you’ve played Euphoria: Build a Better Dystopia.

The average playtime is 2 hours, but it can take longer depending on the people you’re playing with. The game can be enjoyed by up to 4 players, and it has a solo mode.

The point salad term is used to describe board games that allow you to score no matter what you do. However, Teotihuacan is far from a simple game — there are so many actions and different avenues you can take towards earning the most points. 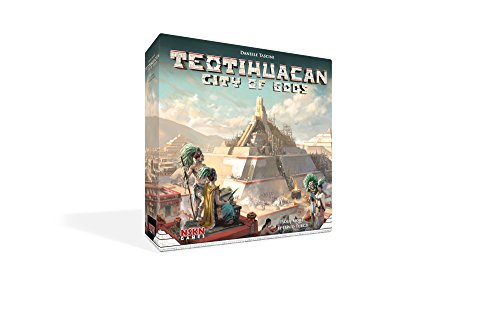 The game is very demanding and is not something you should play with beginners, but it can easily become a favorite for a more experienced crowd. There’s a lot of depth to the mechanics and unlike so many games in the genre, it doesn’t turn simple once you figure out the rules.

The first thing I want to mention is the tokens. Teotihuacan uses wood for most of the pieces, and while the shapes and colors are on the basic side, I’ll always take wooden pieces over plastic.

The pyramid tiles are the pieces that stand out the most. Even though it’s a completely different culture, these tiles remind me of Mahjong, with the bone-white background color and puzzle-like illustrations. When you stack them into a pyramid, it even looks like a Mahjong tower.

The rulebook is rather long at 24 pages, but it features a lot of visual examples and is well-formatted. The background has a papyrus look to it and there are subtle theme-appropriate sketches throughout which I really liked.

There’s a ton of punchout cardboard to go through, over a hundred pieces to be more accurate. The color scheme and illustrations fit the theme really well. A lot of pieces have a worn or faded background color, and there’s nothing that really pops.

The game board is massive and packed full of game elements. A lot of it will be covered by tokens, but the impression I’ve got is that the theme-appropriate color palette dulls the board.

With a game like this, design quickly takes a backseat as the strategy and mechanics take over, and a more vibrant color scheme with fewer ornaments could have been better gameplay-wise.

In Teotihuacan, cocoa is used instead of coins. It’s unfortunate that the designers went with punchout coins rather than wood or even plastic, but it’s not too big of a deal. A lot of people have been swapping them with coffee beans, which definitely works.

All in all, the components of Teotihuacan are satisfactory, but there’s definitely room for improvement. The number-crunching players may dislike the aesthetic, but I can’t say that the theme doesn’t make the game more interesting and eye-catching for potential players.

How to Play Teotihuacan: City of Gods

As even the shortest explanation of all the mechanics in Teotihuacan would be far too long for this review, I’ve decided to give you a brief overview of how the game is played and what to generally expect. If you’d like to learn how to properly play Teotihuacan, I strongly suggest the Watch It Played video guide.

The pyramid tiles are taken at random and placed on the center of the board in a pattern that depends on the number of players. With all of the boards and tiles set, every game of Teotihuacan is heavily randomized.

Players receive resources and choose two out of four dealt starting tiles that will provide benefits. The starting tiles also designate where the workers can be placed at the beginning of the game.

The worker placement is similar to the way Euphoria does it, but there’s a big difference. Players choose to perform an action during their turn or unlock all of their workers. Workers can also be unlocked during the normal action for a fee.

Locking prevents a worker from moving around the board. Think of it as the classic worker retrieval action, but instead of picking up the worker dice from the board, it’s simply allowed to move again.

The workers will move up to three spaces around the board in a clockwise fashion. There are eight action boards along the track for players to reach and take actions from.

If the player chooses to take a normal action rather than unlocking workers, he’s presented with three options:

Collecting cocoa is a way of getting coins while worshipping can be done on certain action boards to advance a temple tracker. The main action depends on the action board the worker has landed on and has a series of sub-rules.

Scoring is performed once an Eclipse is triggered, signified by the black and white tokens on the calendar tracker. The ways that you can score in Teotihuacan are:

The game is played over three eclipses that you can think of as rounds. Once the third eclipse is resolved, the player with the most victory points is declared the winner.

Your First Game of Teotihuacan: City of Gods

The first game of Teotihuacan should be played on a day off and when you’re well-rested. Forget about the average playtime of 2 hours — I don’t think you’ll get to the end of the game without at least 4 hours.

The good thing about Teotihuacan is that it has a beginner mode. There are several mechanics that are removed from the game to make it easier to grasp during your first session.

Instead of placing random action boards, make use of the pre-printed boards on the mainboard. You won’t need the royal tiles, technology tiles, or the temple bonus tiles for this setup. Match it with the first game worker setup to get a more digestible experience out of the game.

The solo mode is a great way to learn the game on your own. You’d be playing against Teotibot, an automated opponent in a simulated 2-player game. You can play by the standard rules optimized for experienced players, or use the available rule changes to make the game easier.

The majority of the games in the worker-placement/Eurogame genre seem challenging at first, but quickly boil down to a few optimal strategies and streamlined turn execution.

Teotihuacan: City of Gods is not that kind of game. The gameplay becomes less of a challenge as you memorize different rules and mechanics, but the strategies remain complex with many branching paths towards victory.

The highly randomized setup really affects how the game is going to go, so you’ll have to adapt based on the situation and not use a strategy that worked well last time. From what I gather, the game is well balanced and it doesn’t seem like there’s a definitive way to victory.

The game setup can take a while and with over 20 steps to complete, it can have a significant effect on the overall gameplay time. As long as everyone participates, the process can go a lot faster.

The artwork definitely has the take-it or leave-it vibe. Some will like the attempt to match the historical theme while those more interested in the gameplay will criticize the washed-out color palette and the dull-looking board packed full of important locations.

Teotihuacan: City of Gods is a very complex worker placement game that is going to pose a challenge even for veteran players. The depth of gameplay and branching strategies allow you to explore every angle towards victory, while the randomized setup provides a different experience every time.

Like I’ve said in the review, I would not recommend this game for casual players or even those who want a bit of a challenge. Teotihuacan is going to provide the best experience to those players that have already figured out the most games in the genre and are looking for a much deeper experience.

The first expansion for Teotihuacan was released in 2019, a year after the base game. It’s a modular expansion that includes new asymmetrical player powers, a fourth temple, and variable effects during each season and eclipse. 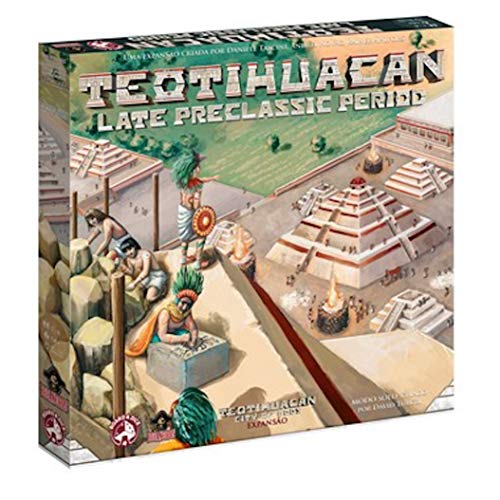 The Shadow of Xitle introduces ten new technologies and ten starting tiles to increase replayability and mix-up established strategies. This expansion is compatible with Late Preclassic Period so you can both once you’ve had your fill of the base game. 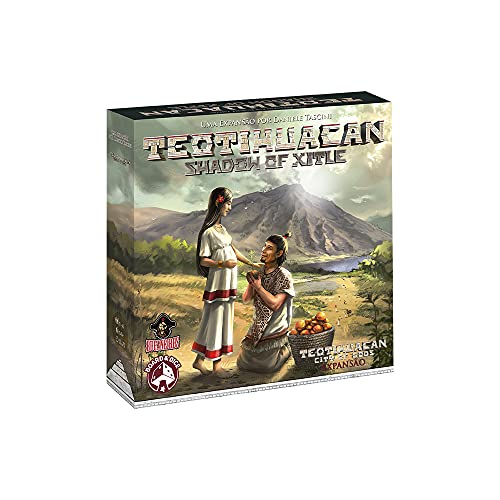 The latest expansion for Teotihuacan brings obsidian as a new resource, new action boards, modules, and functionalities. The number of actions and the overall complexity is greatly increased with the Expansion Period, so I recommend leaving this expansion for the last or alternatively buying over the first two. 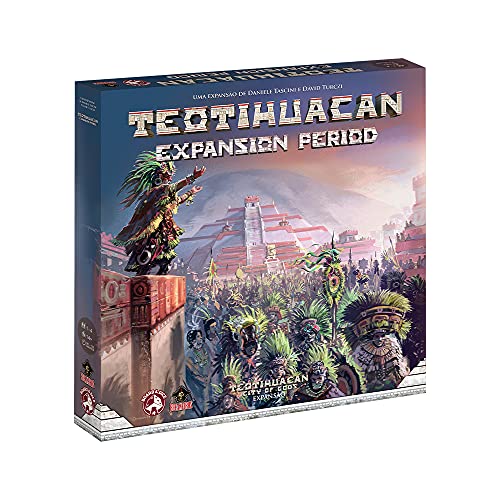 I haven’t been able to experience all that Teotihuacan: City of Gods has to offer for a few reasons. First, the depth of gameplay requires more playthroughs than my free time has to offer, and second, finding a group of people to play it with was far from easy.

A game as heavy as Teotihuacan either becomes one of the few go-to complex games or something you try for a bit and then put away, never to play again. It simply comes down to the time and effort you have to invest into learning how to play competently. If you leave this game on the shelf for a few months, you can be sure that you’ll have to relearn most of it.

So who is this game really for? As someone who has played Euphoria and Terraforming Mars to the point where there’s no strategy left to explore, a game like Teotihuacan can be an excellent step-up. The only thing stopping me from changing to a heavier game is the group that I’m playing with, as they’re not willing to learn a more difficult game.

However, if you’ve got a group of like-minded individuals, I can definitely recommend picking up Teotihuacan: City of Gods as your next big game. Alternatively, you could look into A Feast for Odin, an action-packed game that has similar gameplay.

We hope you enjoyed our Teotihuacan: City of Gods review! Have you tried out this challenging board game yet? We’d love to hear your thoughts! Drop a comment below and let us know what you think.

Looking for other games to play? Check out the video below:

Paladins of the West Kingdom Review