The Star Wars universe has been the main theme of more than 50 board games, making the search for a great adaptation quite a challenge. Star Wars: Imperial Assault is not only one of the best implementations of the theme, but an excellent board game in its own right!

Star Wars: Imperial Assault is a game for board game enthusiasts who are fans of the Star Wars universe. It’s a fairly complex game so I wouldn’t recommend it for complete beginners, but if you and your party can grasp the main concept of the game, you’ll be able to enjoy hours of intense Rebel vs Empire campaign and have head-to-head skirmishes against another player.

Star Wars: Imperial Assault takes place after the destruction of the Death Star, with the Galactic Empire counterattacking the Rebel base at Yavin 4. To thwart the Empire’s efforts, Rebels dispatch a team of elite operatives.

Imperial Assault is a solo to 5-player game that can be described as an asymmetric strategy game with tactical combat.

The campaign places one player in charge of the mighty Galactic Empire, with the rest forming the team of Rebel heroes. In skirmish missions, two plays face off in a tactical battle.

Star Wars: Imperial Assault is a fairly complex game, with plenty of rules and mechanics to master. Campaign missions take up to two hours and are best experienced with 5 players, while skirmish missions are shorter and designed for two players.

When you lift the box lid off, you’ll quickly realize there’s quite a lot to read through in Star Wars: Imperial Assault. There’s a total of four books to go through, all printed on full-sized, glossy paper in high quality. To start, you’ll need to familiarize yourself with the Learn to Play guide and use the rest as needed.

The box is very tall too, to accommodate the thick stack of map tiles and 34 figures hidden beneath a box divider. The 33 units and one 7-piece AT-ST add a lot of value to the game. Even though they’re molded out of softer plastic, they’re highly detailed and ready to be painted.

All of nearly 300 cards in Imperial Assault look and feel great to the touch. They’re divided into a dozen or so categories and come in mini, standard, and large dimensions. The strong colors and detailed illustrations are paired with readable text, even on the smaller cards.

The punch-out cardboard pieces are double-sided and the map terrain is made modular to fit multiple mission layouts. The overall design of the components is quite impressive, both in quality and the amount of content received. In this price range, it’s not uncommon for the game to not include minis, so it’s pleasantly surprising to see 34 in an officially licensed Star Wars game.

Taking you through all the rules and scenarios would make this review way too long, so instead, I’ll explain the main concepts to give you an idea of how the game is played.

The best way to learn Imperial Assault is to play the tutorial scenario prepared in the Learn to Play guide, but the same rules apply for any mission. To set up the game, assemble the board using appropriate map pieces and doors.

Place the most experienced Imperial Assault player (or board game player in general) in charge of the Empire, with the rest acting as Rebel heroes. Then distribute hero figures, sheets, cards, and everything else according to the rulebook.

In Start Wars: Imperial Assault, heroes can move, attack, interact, rest and use special abilities. Two Rebel hero actions are followed by the activation of one Imperial deployment group. Once the Imperial player activates all the units within the deployment group, the next Rebel can take their two actions.

Players can choose to move their hero (or Imperial troop) as one of their actions. Figures can move diagonally, but cannot pass through obstacles. The range of movement is displayed on the hero sheet or deployment card. Movement can be separated into two phases and used before and after the second phase.

Searching, examining and opening doors are the most common ways for figures to interact with the environment. To interact with an object, it has to be within the same space, or in an adjacent space to the figure.

Looting crates for supply cards are reserved for heroes. The supply cards provide the hero with a benefit, while the crate token rewards players with credit at the end of the mission. Doors act as one-time barriers and can be opened by anyone. There are also special tokens, such as terminal or mission tokens with effects tied to the scenario played.

Heroes can rest to recover from strain or damage suffered during the mission. Through abilities and excess movement, heroes accumulate strain, while damage is suffered through combat. When a hero rests, subtract the number of strains from the hero’s endurance stat — the excess is used to heal damage.

Combat is resolved through dice rolls, with heroes as the only figures that can attack twice during the same deployment. To fight an enemy, a player selects their target and rolls the attack, while the defender rolls to defend. Subtract the defend results from the attack results to get the amount of damage dealt.

Next, to attack and defend results, you can also roll surge to trigger abilities, evade to cancel a surge result, dodge to avoid the entire attack, and accuracy check for ranged weapons.

Melee attacks can be executed if the target is next to the figure, while ranged attacks require a line of sight and need to roll for accuracy. The combat system is very straightforward and something you’ve certainly seen before, so don’t worry if you don’t fully understand it right now.

Abilities can be found on Hero sheets, class, and deployment cards, as well as within the mission briefing. They serve as means to break the boundaries of standard mechanics and perform great feats. Some abilities require heroes to suffer strain, and the Imperial to spend threat tokens to use them.

Strain abilities were already mentioned, as they’re tied to combat, but some abilities can be used as special actions, but only once per activation.

Missions have a clear set of objectives for either party to achieve. As soon as one side fulfills its objective, the mission ends. The tutorial mission is a one-off, but the campaign will take players to a series of narrative-driven scenarios.

Even though Imperial Assault has four rulebooks, you only need to read the Learn to Play guide to get going. The tutorial mission is ideal to get yourself accustomed to the mechanics, and from there, you can go into a full campaign.

The campaign formula is very easy to follow. Once you resolve the first mission, you get to purchase new items, class, and agenda cards to reinforce your heroes. Then choose the next mission and repeat the cycle. The game ends once you play through the climactic scenario called “The Finale”.

If you’re playing the Empire, keep in mind that you cannot win in a straight-up fight with the Rebels. Instead, look towards your objectives to see how you can get there without fighting the heroes head-on. As a Rebel, focus on the objectives but also removing figures when the fights are favorable.

Play the game as if it was a D&D session, with the Imperial player as DM. They’ve got a lot of power over how the game goes, so it’s important to be in the right mindset to properly enjoy the game.

Let’s start the pros section with the main aspect of the game — combat. At first, it may look like a plain dice roll system, but the revised Descent system and custom dice make every battle exciting and unpredictable. The system is easy to grasp and after a few rolls, you’ll get a hang of things.

Star Wars license was not used as a marketing ploy — not only do the components resonate with the theme of the universe, but so does the campaign. It’s well designed with a story that may not be the best but still feels like a Star Wars adventure.

Having four rulebooks may seem like an obvious drawback, but let’s look at it from a different perspective. Instead of cramming everything into one book, or even worse, cutting down on information, the designers at Fantasy Flight Games decided to separate their rules into distinct segments.

Don’t want to play skirmish? You don’t need that book. There’s a debate over the effects of a card? Consult the reference guide. All you need to do to start playing is read the 10 or so pages of the Learn to Play book. When it’s time for the campaign, you’ll follow the Campaign book one page at a time.

The way the campaign is balanced is not going to appeal to everyone. Some missions clearly favor Rebels, while others lean towards the Empire. This is acceptable to some extent, but a bad side mission draw can negatively affect the Rebels early on.

Star Wars: Imperial Assault has character progression, but the ways you can develop your hero are very limited. There are 8 predefined skills per character, and that’s about it. This is not an issue if you’re approaching the game with the knowledge that it’s not a D&D or a classic RPG experience, but a more streamlined adventure.

Released in 2015, Return to Hoth focuses on the defense of the rebel base Hoth against the forces of the Empire. The game is expanded through new campaign content and skirmish games. 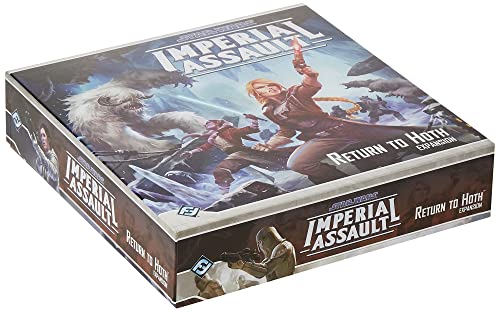 A new mini-campaign has the Rebels search and help Han Solo on Mos Eisley. This 2015 expansion also adds a new skirmish game, and two new heroes for the Rebels, as well as Heavy Stormtroopers and Tusken Raiders for the Empire. 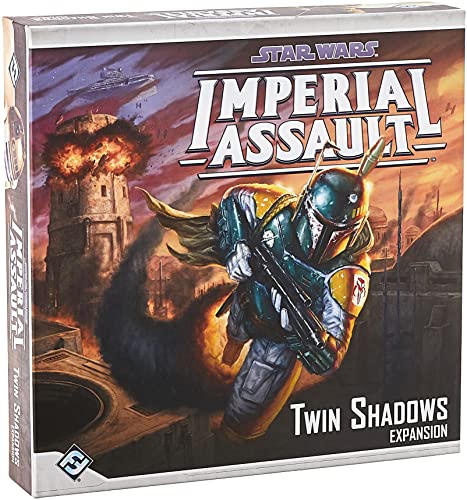 Like the other expansions, Jabba’s Realm expands the game through a new campaign, skirmish mode, but also 16 new plastic figures. Set on Tatooine, Jabba’s Realm will let you re-experience the iconic scenes from the Return of Jedi. 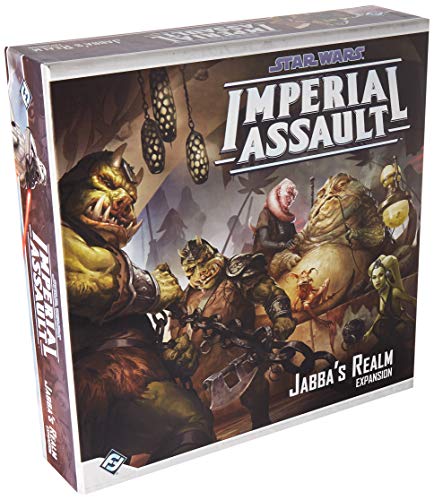 Honestly speaking, I’m not a huge fan of the Star Wars universe. I liked the originals and was one of the few people to really enjoy the Prequels, but beyond that, I had no further interest in the universe.

This allowed me to focus more on the gameplay aspect of the game, while I let my friends help me form an opinion on how well the theme was executed. Star Wars: Imperial Assault succeeds on both fronts — as a board game, and as a faithful adaptation of the Star Wars universe.

I can safely recommend Star Wars: Imperial Assault to any fan of the universe George Lucas created. I hope this review helped you decide on whether or not to get Imperial Assault, and if you’ve enjoyed it, then take a look at other reviews to find more interesting games to play!

We hope you enjoyed our Star Wars: Imperial Assault review! Have you tried it yet? Or any other Star Wars board games? We’d love to hear your thoughts on this excellent game from Fantasy Flight Games. Drop a comment below!

Find more Star Wars Board Games to play in our video round-up below: