The once-gleaming cities of the Trade Federation are now bombarded by dreadnaughts from the Star Empire. All the while, the machine cult is lurking on the fringes of the battle waiting to pick through the bones of the ruined city.

Unbeknownst to them all, the mysterious Blob race responsible for untold genocide is slowly approaching the unwary trio.

Welcome to Star Realms. Try not to die. Let’s dive deep into our Star Realms Board Game Review.

Each faction has a different specialty and is better at a different aspect of the game. Some are punchier and others are better at economics. We’ll get a little bit more into that later.

Star Realms is a deck-builder with a shared buying pool, so you don’t have to commit to one specific faction and you can alter your strategy on the fly.

Like with all deck-builders there’s a lot of expansions that add to the experience. Each one focuses on a new concept or addition to the core mechanics.

The Gambit is a small pack that adds a one-time-use powerful ability. Each player starts with 2 gambits and can use them throughout the game to shift the tides of battle.

This is the first introduction of Hero cards that are immediately played for a bonus when acquired. It also introduces Events. When an even card pops up in the trade row, the card is resolved and discarded. 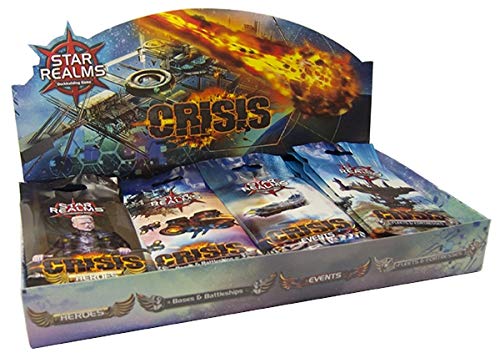 United is another big series of expansions that includes 4 different packs:

United introduces more of the same, plus a little something extra. In addition to new ships, bases, and heroes, you’ll also find missions. Missions give players an alternative win condition that you can spring on your opponent to shut them down. 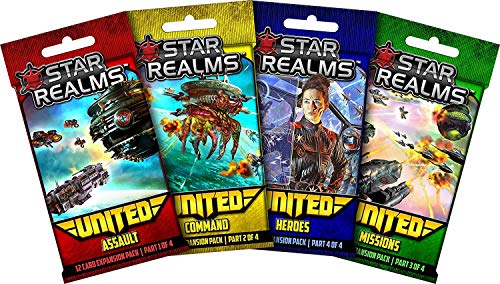 Think of Frontiers as the lovechild of Star Realms and Dominion. It takes the thematic elements, artwork, cards, and gameplay from the original Star Realms, and doubles the size and scope. Frontiers is designed to be played with 4 players and has a more big-box feel than the vanilla version. 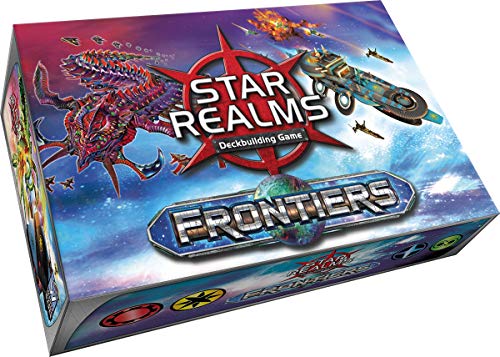 If you’re at all on the fence, you can actually play Star Realms for free on Steam. You’ll have access to the full set of cards but will only be able to play bots on the computer unless you purchase the game. It’s an awesome way to give it a try.

The newest iteration of Star Realms is currently on Kickstarter. It’s been fully backed, so it’ll eventually be in players’ hands soon.

There’s not really a whole lot to unbox because the entire game is about the same size as a greeting card. That’s pretty sweet.

Inside the core box you’ll find:

How to Play Star Realms

There are a few symbols you’ll need to know before we get into the game.

Trade functions as the in-game currency. Each card with the gold trade symbol adds to your buy pool and lets you purchase cards from the trade row on your turn. It doesn’t save in between rounds, so either use it or lose it.

This is pretty self-explanatory. This is how punchy you are in a given turn. Each Combat point deals 1 point of damage to the opponent. You win by taking out the other person’s life points, so it’s a good idea to pay attention to your combat.

Each player starts out with 50 authority and it functions as your life points. There are cards that add to your authority, in essence, healing you, and each point of Combat spent against you reduces your authority (life points).

Each player starts with the same deck of 10 cards, 8 scouts, and 2 vipers. That’s pretty standard for most deck-builders and as the game continues, players’ decks will become vastly different from one another.

The starting scouts are primarily used to gain trade and purchase more powerful cards, and the vipers will do 1 point of combat.

In the center of the table, shuffle the decks and deal out 5 cards face-up. This is the trade row that you’ll be able to purchase from on your turn as cards are bought with trade, they’ll be replaced at the end of the turn.

The last batch of cards to place is the stack of explorer cards next to the trade row. These are always available for purchase and ensure players always have a way of gaining more trade. This prevents a player from totally mucking up their deck and being left stranded without a way to get new cards.

You’ll notice double-sided green authority cards as well. These are used simply to keep track of each player’s overall authority (life points). You can use the cards provided, pen and paper, or even an app. It doesn’t really matter, but I do think the cards work pretty well.

Everything is set up and it’s time to man your battle stations, arm phasers, lasers, and doomsday machines.

On a turn, players can play as many cards as they have. There’s no cost to activate anything, so you can just slam them down on the table while shouting obscenities at your opponent’s mother. That’s how I play anyway. It gets a little weird when I play against my brother.

Some cards will have bonus abilities that allow you to gain extra cards for free, trash cards in the trade row, or even trash your own cards. There’s nothing too complicated. Everything is spelled out clearly on every card, so after a few turns, you’ll have the symbols down.

There are a few special cards that are oriented sideways instead of vertical. These are space stations.

Space stations grant bonus abilities that persist through the turn until they’re destroyed. They could be economically-focused and continually add to your trade every turn. Battle stations that add combat or even specialized recycling plants allow you to trash a card every turn.

The most important feature of the space stations is the added defense they provide. Players will need to blast through the stations before they can attack the life points directly, adding a much-needed wall of defense.

“There can only be one!”

The last player standing with any authority wins the game. It can ramp up pretty quickly. The first several rounds, you’ll most likely be just building up your resources but once the focus shifts, you can easily start to blast away your opponent’s authority within a few turns.

Your First Game of Star Realms

Each faction is better at a specific aspect of the game. You’re not shoe-horned into a specific faction. You can mix-and-match to your heart’s content but each faction builds its own cards. Card synergy is a huge part of the game and many faction cards will grant additional bonuses for playing more than one of their cards on a turn.

It’s a good idea to stick with one or two instead of trying for a menagerie deck.

Which one do I choose?

Let’s take a look. Personally I like the Blobs. I’m a fan of swarmy play.

As you might imagine from a faction with the word “trade” in the name, the Trade Federation cards specialize in generating a large amount of trade. This is a great faction for those who want the economic advantage to literally purchase any card on the board.

The Star Empire is a punchy group. They hit hard and make sure your opponent has a bad day by forcing them to discard cards. It’s pretty annoying having the perfect hand of cards only to ruin it by being forced to discard. I’ve been on the bad end of the Star Empire one too many times.

The Machine Cult is probably my second favorite faction. A lot of the cards allow you to remove cards from your own deck. This keeps everything nice and sleek. It’s pretty sweet once you get everything perfect and remove all of the weak garbage starter cards from your deck. That way you’re always drawing awesome cards every turn.

MY FAVORITE. The Blobs come in and ruin everything for everyone. They hit very hard and destroy cards in the trade row. This is super helpful when you know your opponent wants specific factions or cards. Maybe there’s something awesome you just can’t afford or that you want to ensure your opponent doesn’t get. Simple solution, blow it up. Did I mention that they also generate a lot of combat? Especially on some of the cheaper-cost cards.

I don’t really have a lot of bad things to say about Star Realms.

It’s a full-sized deck-builder in the size of a single deck box. That’s a pretty impressive achievement all on its own, but it can usually be found for under $20. The fact that the game is super fun, puts Star Realms over the top for me.

Usually, in a game this size, you’re forced to buy a pallet full of booster packs to get a decent game going, but even the expansions aren’t necessary until you’ve really played Star Realms to death.

The only thing that I can fault is the multiplayer rules. They are there and you can play Star Realms with additional rules for balance, but they don’t work as well in my opinion. That isn’t normally a problem because I have plenty of other multiplayer games, but there aren’t as many truly great 2-player only games.

Star Realms is an epic 2-player dueling card game. It’s a deck-builder, so everything required to play comes in one box. There are “booster” expansions available, but the contents are set. No randoms or rare cards. You can look up the contents of each pack.

Star Realms is extremely portable and very budget-friendly, making it one of my go-to card games I bring with me almost everywhere. Although it’s small, it packs a big punch in terms of strategy and gameplay.

I love deck-builders and I love Sci-Fi. They’ll always have a special place on my gaming shelf because when Kendra and I started dating, we played Dominion a lot. It was an awesome bonding experience and one of the many reasons I really love board games.

Star Realms really pushes it over the top with its portability. I can fit the entire game in my back pocket. Ladies will have a bit harder time of that but that’s mostly because girl pockets are stupid.

Star Realms has it all: a good price point, simple yet engaging mechanics, awesome artwork, and a ton of replayability.

Have you played Star Realms? What are some of your favorite card games?