Set sail on the Manticore steamship with captain Sofi Odessa and her crew. Explore the mysterious new world, discover new ports, locations, and dangers as you try to find your way back to our realm.

Embark on an epic campaign and awaken the Sleeping Gods in one of the most exciting and enjoyable board games to come out in 2021!

The campaign can last up to 20 hours, but it can be completed in 10 to 15 hours, or in as little as 1 (if you lose immediately). Even if you blitz through the campaign at a record pace, the game is designed to fully support new playthroughs with different paths and discoveries for the party.

What makes Sleeping Gods different from other story games is the atlas, with pages forming pieces of the map you can traverse. You can divide the campaign into as many sessions as you’d like and make it manageable for your party to meet up and enjoy. If this introduction has sparked your interest, keep reading to find out more about the game!

The game comes with the following components:

Over the years, I’ve opened dozens of board game boxes and it took me some time to create solid criteria for what makes the components good or not. The criteria are as follows:

The component quality of Sleeping Gods is excellent on all fronts. The books have a premium feel, cards and punch-out cardboard tokens are all up to standard. The use of wood for combat, damage, and command tokens is a huge plus as far as I’m concerned, and I’ll always prefer it over plastic.

The art in Sleeping Gods is beautiful and consistent throughout. It’s as if Ryan Laukat (the artist) made a palette and painted all of the components in a single day. None of the art pops up thanks to the soft colors, but it all features highly detailed designs you’ll start to appreciate once you take a closer look.

The “wow factor” can be anything that shows the dedication of the designer and impresses you when you first open the box.

The 172-page storybook and the box organizers are certainly among my favorites. Instead of plastic dividers, or none at all, Sleeping Gods comes with paper boxes and dozens of baggies to sort and store game components. It even has a section in the rulebook that explains how to pack the components for storage.

If there’s anything to criticize, it’s the downgraded components from the Kickstarter version. I can’t really blame the developer for doing so, and there are plenty of ways to get them, but the metal coins and steamship are simply superior to plastic and punch-out cardboard.

How to Play Sleeping Gods

Because Sleeping Gods is a story game that is played over a course of several sessions, there are too many mechanics and elements to cover in this relatively brief section.

On top of that, I feel like going too deep into the mechanics could spoil some game elements, so instead, I’ll help you form a picture of how the game is played out.

Before you start the adventure, you’ll have to follow the setup steps and prepare your ship, party, and different decks. The important part is not to change the order of cards in the quest and adventure deck or look through the cards if not specifically told to.

This is also the moment you’ll divide the eight crew members among the players. In the case of a 2 or 4 player game, it’s an even split, but if you’re playing a 3-player game, give the most experienced 3 crew members, especially those that are more challenging to play.

Crew members represent the characters you’ll be controlling throughout the campaign. The crew board depicts the character, their name, and origin, as well as their stats.

Each crew member has a maximum health rating, combat stats, unique crew abilities, and a set of skills/traits. The crew is balanced so that no character is overpowered — those proficient in combat lack the skills and vice versa.

The captain is the most capable of all, but she’s a shared among the entire party and just like everyone, incurs damage and fatigue. Dropping to 0 health puts a character out of commission, but they can be healed up and used again. The fatigue builds up as the character takes certain actions, and has to be cleared before they can act again.

The ship represents the 10th crew member and has a significant role in the game. It has five rooms for the crew to use and gain benefits. The ship also has its own actions and can take damage, so you’ll have to take care of it and repair the damage to restore function to certain rooms, but more importantly, stay afloat!

The Flow of The Game

Players take their turns in a clockwise order starting with the first player. During each turn, players take the following actions:

The first action allows you to visit one of five ship rooms and receive ability cards, command tokens, restore health, and remove fatigue. Drawing the event card may lead to a choice, challenge, consequence, and other situations.

Once you’ve resolved the event, you take command of the ship and take it to port or a market, discover a new area, or explore certain locations. You can skip the actions to get commands, a currency used to activate crew abilities.

As you take turns, you’ll visit new areas and expand your story. The gameplay itself is very important, but Sleeping Gods place a lot of value on the narrative aspect of the game as well.

The challenges represent the classic skill checks you’ve probably seen before. The combat compares your character’s attack against the monster’s defense and is modified through fate cards rather than dice rolls. The game allows you to alter this mechanic and use d6 dice instead of fate if you prefer.

To successfully finish the Sleeping Gods campaign, you must survive until you’ve found enough totems to go back to our world. Defeat is also an option and happens if all of the crew members are knocked out, or the ship suffers a critical amount of damage.

The game can be played in two modes: normal and brutal. If you end up defeated in normal mode, you may continue your campaign with certain penalties and a negative score on your campaign log. The brutal mode is not so forgiving — losing the ship or the crew marks the end of the campaign.

When the campaign ends, successfully or not, you’ll still write the score on your journey log sheet for future reference. This allows you to track your progress and see how you’ve improved since the last campaign.

Your First Game of Sleeping Gods

Sleeping Gods is a narrative-driven and cooperative game, so to make the most out of the experience, both you and your party need to approach the game with the right mindset.

The game establishes from the start that there is no leader by allowing everyone to utilize the captain. You have the power to use your actions and the captain as you see fit, but it’s better to communicate your moves with the party and work together.

There’s nothing else that I need to mention in this section — Sleeping Gods is a game you should go into blindly and enjoy the surprises and unique situations without spoilers.

The two pros could not be any broader, but I feel like Sleeping Gods does so many things well it’d be a disservice to not cover them in some way.

The story and the gameplay go hand in hand and keep you interested and involved with the game from start to finish. Sometimes, making decisions can be easy, but there are moments where the entire party will discuss for minutes what their best course of action is.

Exploring new locations brings excitement and a sense of danger, making the map so much more than just an arbitrary set of locations to visit. Working towards finishing a quest, improving the crew, meeting new characters — Sleeping Gods offers a lot of interesting features.

The game promotes campaign replayability, but you might be surprised to learn that aside from some cards, you don’t get to carry anything over into the new campaign. This point is more of a heads-up rather than a contra, as I don’t find that starting fresh is necessarily a bad thing.

The combat-related problems are revealed in several ways. Going into a battle unprepared is a recipe for a disaster, but if you’re well equipped, the difficulty is significantly reduced.

The problem is that sometimes, and especially in your first game, it’s going to be difficult to gauge where you’re at strength-wise in comparison to your opponent.

It doesn’t help that healing generally requires you to spend resources (gold and food) that are primarily acquired through combat, creating the catch-22: you can’t heal without fighting, but you can’t fight because you are injured.

Tides of Ruin expands the game with a new atlas, storybooks, adventure cards, enemies, and many other components. The expansion ties seamlessly to the base game and enriches the experience for both new, and experienced Sleeping Gods players. 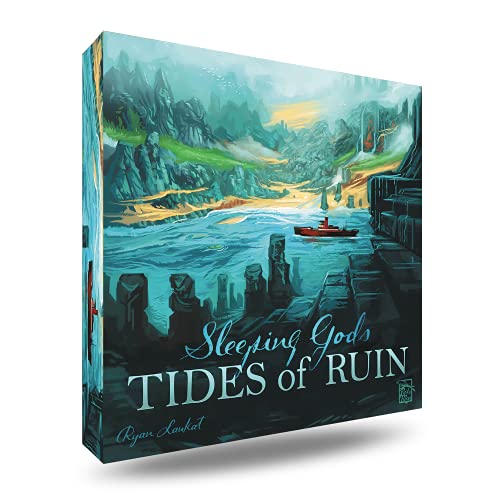 The Dungeons expansion brings exactly what it says — six dungeons with new maps and stories to explore. You’ll encounter dangerous foes, face challenges and traps, solve puzzles as you work your way towards the treasure! 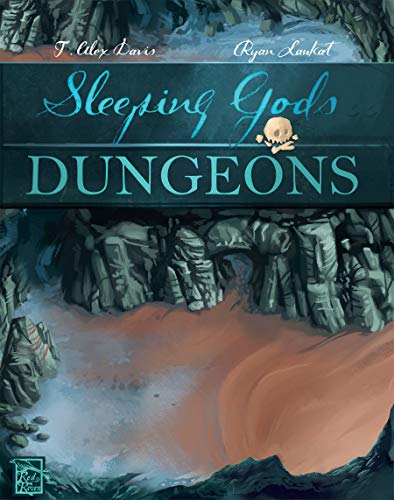 Sleeping Gods has a refreshing premise and provides a different take on narrative games. You’ll have to work with your team to succeed, but the experience doesn’t rely on roleplaying. This board game is going to appeal to a wide player base, but it’s especially enticing if you’ve grown tired of scenario-driven, medieval fantasy roleplaying games.

When I picked up Sleeping Gods, I had a feeling it was going to be a huge commitment along the lines of Gloomhaven and similar games. I was positively surprised when I realized our first playthrough only took four evening sessions to complete!

The game is far from unique, but it does a few key elements in a different way, and it makes a significant impact on the overall experience. I’ve used the term “refreshing” to describe the game a few times already, but it’s really the best word I can use to describe Sleeping Gods.

Even though it has clear fantasy elements, skeletons, beasts, and monsters, I couldn’t help but think of the novel Around the World in Eighty Days by Jules Verne.

The exploration, story, challenges, and quests create a true sense of novelty and adventure elevate Sleeping Gods to a new level. I have no problems recommending Sleeping Gods — the time commitment isn’t that bad, and I’m sure you’ll always come back to it for one more session and one more campaign.

We hope you enjoyed our Sleeping Gods review! This unique game is quite complex but appeals to gamers from a wide variety of backgrounds. Have you tried Sleeping Gods or any of its expansions? Drop a comment below and let us know what you think! We’d love to hear from you.

Sentinels of the Multiverse Review