“It is never too late to be wise.”

Daniel Defoe’s classic novel has always fascinated me. It’s a thrilling story of the growth of Robinson as he finds himself shipwrecked and scavenging to survive to the point where he’s thriving with a fully functional farm (complete with goats) and braving the perils of the natural world without modern conveniences or technology.

There’s something about this survival story that sparks wonder in my imagination.

The board game, Robinson Crusoe: Adventures on the Cursed Island, attempts to recapture that same aesthetic by throwing you and a handful of survivors into that dangerous world where you and your companions will struggle to stay alive. The game, however, seems much harsher than the story I remember from my childhood.

It’s going to be difficult but the good news is that you have help. Let’s dive in and see what this cooperative game has in store. 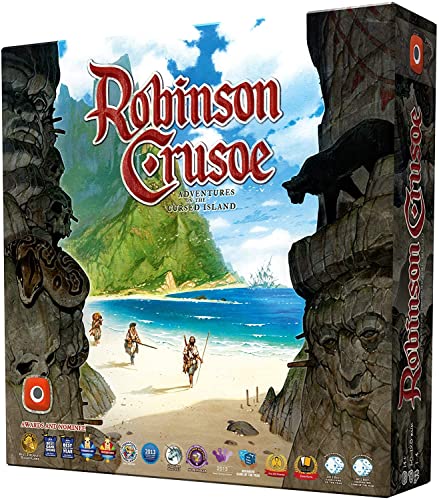 Robinson Crusoe: Adventures on the Cursed Island is a cooperative board game for 1-4 players. Stranded on an island, you have to work together to survive.

Each game is played using one of 8 scenarios, each one with its own different thematic flair and victory conditions.

It’s a game that masquerades as a friendly cooperative island survival adventure but the truth is it’s not really all that friendly.

“Man is a short-sighted creature, sees but a very little way before him; and as his passions are none of his best friends, so his particular affections are generally his worst counselors.” ―Daniel Defoe, The Life and Adventures of Robinson Crusoe

Robinson Crusoe: Voyage of the Beagle

The Voyage of the Beagle recounts the events of the written account by Charles Darwin and multi-year expedition. It’s actually where he began to formulate his Theory of Evolution.

The Expansion actually places you as crewmates onboard the HMS Beagle along with Darwin. Your job is to support Darwin throughout the expedition with 5 new scenarios to explore. 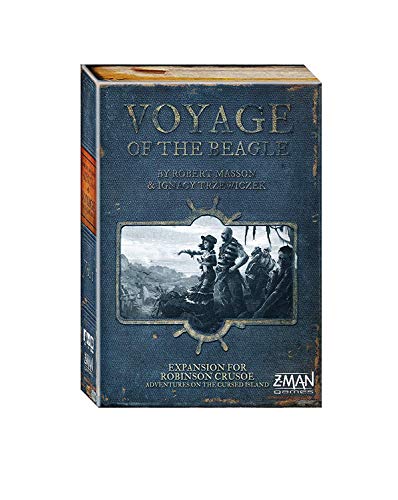 Robinson Crusoe: Voyage of The Beagle
Buy on Amazon

Mystery Tales introduces several new mechanics to the world of Robinson Crusoe. The 5 new scenarios added to the game can actually be played campaign style. I’m always a fan of campaign games; they tend to hit the shelf in rapid succession whenever I get a new one.

Mystery Tales also introduces a sanity mechanic. So as your brave adventurers are confronted with trials and tribulations in the physical world, their mental fortitude will also be tested. 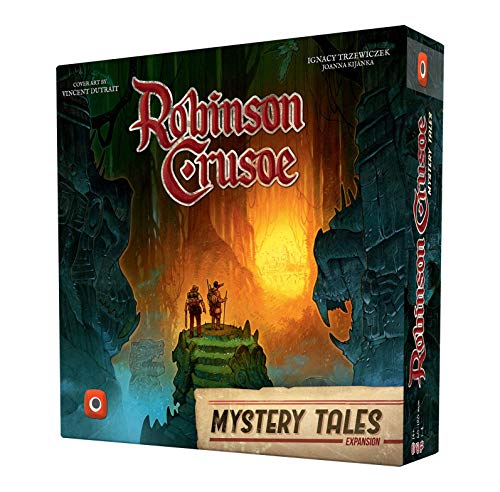 If you don’t have a copy yet, definitely look for a Second Edition copy. It’s been completely upgraded and republished by Z-Man Games. It just looks fantastic.

There are wooden resource tokens that come with the Second Edition and are a vast improvement over the First Edition. They’re easily identified and add a fun flair to the game as the island tries to kill you.

The rulebook, as I mentioned earlier, has been revamped too. Although I wouldn’t say it’s particularly easy to just pick up, it is much clearer and more organized than the First Edition.

The board is bigger than you would think. Pictures don’t really do it justice. The thing is huge and holds all of the trackers and spots along with the map. The map is (surprisingly) only a small portion of what’s going on the board.

All of the cards are nicely done and the artwork on everything is fantastic. I really enjoy it. The character boards come on decent quality cardboard, so I’m not too worried about warping. Each character board is double-sided for male and female characters, so nobody feels left out.

The only problem I have with the components is the storage. There’s just a generic big gaping hole in the middle of the box. There aren’t any organizers. AHHHHHH!! If you’re not a weirdo like me and box storage doesn’t bother you, then don’t worry about it. If you are a weirdo like me you’ll have various-sized baggies and tins ready to store all of the components because there’s really nothing in the box that helps with storage.

How to Play Robinson Crusoe

“But as abused prosperity is oftentimes made the very means of our greatest adversity, so it was with me.” ―Daniel Defoe, Robinson Crusoe

Each time you play, you’ll need to select a scenario. The game comes with 8 different scenarios, and there’s actually some fun fan-made scenarios that can be found online. Someone even made a zombie island variant. I don’t know if we needed a zombie scenario, but it’s there.

Each scenario will have its own set of victory conditions and objectives. The game is played in rounds and each round consists of 6 phases:

After the first round, every round starts with an event card. You’ll draw a card and then resolve any effects from the card. At first, it’s just going to be events. As exploration cards are played, some of them may be added to the Event deck. These represent things that start to go wrong and then as they are pulled from the event deck, they really start to go wrong.

For example, you could have an exploration where you find out that your shelter has some serious structural weaknesses. This card will then get added to the event deck and if you don’t fix your shelter by the time it comes around again, BOOM, your shelter collapses.

Morale is very important in Robinson Crusoe. The same, I suppose, could be said for real life as well.

Morale is checked right after the event cards are resolved. Having high morale can be a great benefit and low morale is damaging.

If you lose more determination tokens than you actually have, then the difference is taken in wounds. It’s always good to take care of your mental health. That’s a protip for life and in gaming.

On to the good stuff! Your encampment will help generate resources every turn.

This is where all the action happens… so to speak. The majority of the game takes place during this phase and it’s quite an extensive phase.

The Action Phase is where players assign their action tokens. There are several options and players will only have 2 Action meeples to assign. It’s absolutely imperative that everyone works together to ensure the survival of all.

The 7 actions that can be taken are:

This is probably one of the hardest aspects of the game because there’s not a whole lot you can do about bad weather.

Weather mechanics are one of the most brutal aspects of the game. Basically, at any point, you can get knocked down and lose significant progress from a bout of bad weather.

Time to relax. Players can set up their encampment on a new tile, eat some food (hopefully), and relax a little bit before it all happens again tomorrow.

So I’ve mentioned determination tokens several times now and never said exactly what they’re good for. Each character has a different set of special abilities that they can use. Determination tokens are needed to actually use each ability. You’re going to need to keep your morale high if you want to use your bonus abilities. If morale drops, players will start to lose determination tokens every turn, which will then make everything even more difficult.

Your First Game of Robinson Crusoe

“And thus I left the island, the 19th of December, as I found by the ship’s account, in the year 1686, after I had been upon it eight-and-twenty years, two months, and nineteen days.” ―Daniel Defoe, Robinson Crusoe

Scenario 1 is recommended for beginners. It’s the standard “castaway” situation. You’ll have to survive on the island long enough to signal a ship for rescue.

This is a pretty bare-bones scenario that doesn’t throw anything particularly nasty at you, just the usual brand of nasty that comes with the game.

The goal is to build a woodpile and have the ability to light it on fire no later than the 12th turn. If you manage to survive to round 10 and have both a fire and a woodpile then you win. If not, you still have until round 12 to complete the objective.

“We drank the rum, and I forgot my promise to God.” ―Daniel Defoe, Robinson Crusoe

I personally love the theme and artwork here. I first read a simple abridged version of Robinson Crusoe in 2nd grade and it quickly became one of my favorite books. It’s definitely responsible for my love of Man vs. Nature literature. It works well as a cooperative game and when you actually manage to win, it’s anything but a hollow victory.

Z-Man Games republished Robinson Crusoe with a Second Edition that fixes a lot of the complaints that people had with the original game. The rulebook has been completely rewritten, which is much easier to understand and a lot of rules have been clarified.

Ok so I may be a bit overdramatic with the DEAR LORD IT’S DIFFICULT, but the game isn’t easy by any stretch of the imagination. Literally everything in the game has the potential to fail or go wrong at some point during the game and there’s simply not enough actions to build a perfect Gilligan’s Island camp. It’s just not going to happen. The game is winnable, however, and offers an incredible challenge that forces players to work together. If everyone’s not on the same page then chances are you’re going to get overrun on the island.

This brings me to my next point: the Alpha Gamer. Robinson Crusoe is designed to push the Alpha Gamer to the forefront. If players aren’t working together toward a common goal, you’re almost guaranteed to lose. If all players are on the same skill level then its not as prevalent, because everyone either is learning together, or they all have an idea of what needs to get done. It’s when you have one player that’s more experienced than the others, that you’ll start to see the alpha gamer pop up. While everyone is excited about an adventure and their first trek into the unknown, the veteran player will be shouting about hidden dangers, morale, food, and rope.

Personally I think it’s more fun to die together and learn the game at the same pace as the group than to simply win.

Robinson Crusoe is a cooperative game for 1-4 players.

With Robinson Crusoe, you literally feel like you’ve been shipwrecked on a deserted island. If you have that one guy who keeps wandering off and just doing things without the consensus of the group, your chances of survival drop significantly.

I really like the game and it may be worthwhile to have one member of the party be a more experienced player to help get the rules down. Just make sure they’re not too domineering. It can very easily turn into three people around a table moving pawns for a fourth.

Don’t let that put you off, though. There’s an insane amount to be explored here and more than a few epic moments of survival. I’ve barely scratched the surface with this review. There is a lot more going on in this game than I could ever cover in a single article.

If you don’t have a chilled-out, experienced player, you’ll definitely want to try your first game with players on the same experience level as yourself.

What are your thoughts on Robinson Crusoe? Did I miss anything? Drop a comment below and let us know.