Medieval Orléans was a developing city and as such provided plenty of opportunities to gain wealth and power. The player will create their economic empire by recruiting personnel that can provide coins, create trading posts, take on expeditions, and more.

If you like engine-building board games but want to play something with a unique spin, Orléans might spark your interest. It uses a bag-drafting mechanic for followers which adds an additional dimension to the strategy and depth of play. 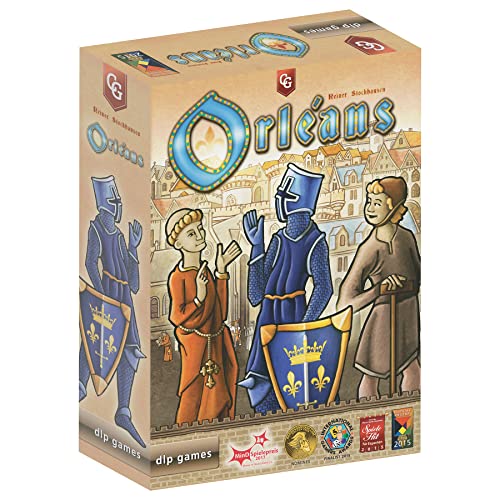 Orléans is one of the most popular and highly rated board games, both in its genre and in general. What makes it even more impressive is that Orléans came out in 2014 and there have been many games since that tried to innovate, but only a few managed to outdo Orléans.

The game can be played by 2 to 4 players and can be completed in about 90 minutes. Orléans is a fairly complex game, so I wouldn’t recommend it as a family pass time, but if you’ve got a couple of friends that are into deck-building & engine-building board games, then you’ll have a lot of fun with Orléans!

As the name implies, the 5th player box expands the game with additional components and rules reworked to accommodate the 5th player. It also includes the “The Trip To Tours” solo scenario. 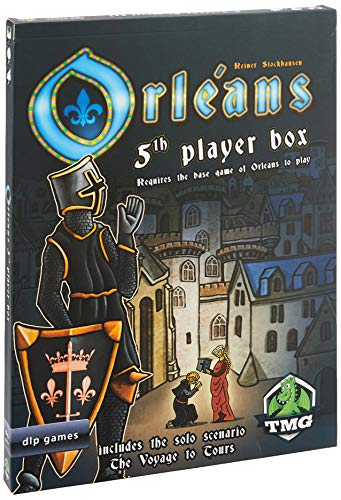 The first large expansion for the game, Invasion adds scenarios for the players to go through, as well as new place tiles that can be used with the standalone game. 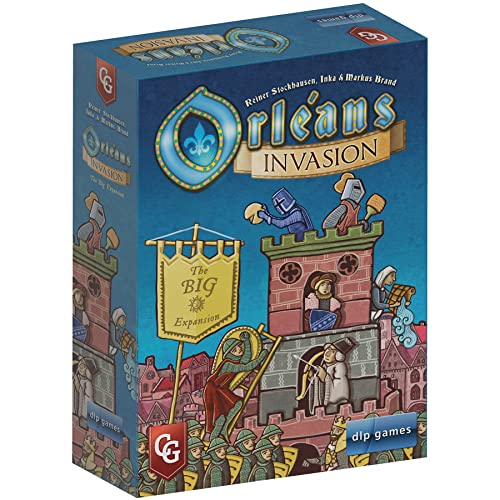 The Orléans packaging looks deceptively small, as the box is filled to the brim with components, and doesn’t contain decks of cards or box organizers that would take up more room than necessary.

The game board is quite sturdy and features era-appropriate colors and illustrations. Those with an itch for symmetry will be annoyed by the skewed map, an intentional design choice that even I am not sure what to think of.

The beneficial deeds and player boards are large and well organized, allowing players to track each other’s boards with ease. Perhaps the beneficial deeds section could’ve been integrated with the main game board, but it works well as it is now.

What I found really interesting is that the designers opted for punchout follower discs, considering that they’ll be put in a bag, shaken, and then fished out. I’m sure I shared the same first impression with a lot of people, thinking that there’s no way these cardboard pieces will endure the abuse.

To my surprise, the boards containing the follower discs were heavier than the others with a clear difference in thickness. The designers cleverly solved the durability issue without compromising on the details they could put on the discs, which would not have been possible with plastic or wood.

There are no flaws with any of the other components either; the bags are big enough for anyone to put their hand in, building tokens are made of wood and the rulebook is detailed and in full color.

How to Play Orléans

What makes Orléans so liked among strategy board game players is the number of branching paths you can take.

I’ll take you through the phases, scoring, and a general overview of the available actions. For a more detailed explanation, I recommend the rulebook; at only 12 pages, it explains everything you need to know.

The goal of the game is to accumulate as many victory points as possible. To score points, you’ll have to gather resources, build trade stations and collect citizens. The way you do this is by moving around the map and progressing the different tracks.

If your strategy is to accumulate trade stations and citizens, then the development track is going to be very important as it acts as a score multiplier.

Orléans is played over a series of 18 rounds, with each divided into 7 phases. The first player token is given to the youngest player at the start of the first round and moves counterclockwise.

Rounds begin with the hourglass phase which acts as the round counter and establishes the event that will be important during the 6th phase.

The census phase focuses on the farmer track. The player that is furthest ahead receives a bonus coin, while the last player has to return a coin. Ties negate both the positive and negative effects.

During the followers phase, everyone draws a number of followers from their bag corresponding to their progress on the knight’s track. Followers are placed on the market spaces of the player board.

The planning phase involves the distribution of followers from the market to the appropriate action spaces on player boards. Players can choose not to distribute all of their workers, or to complete the requirements but not activate the action immediately.

The action phase allows players to utilize their activated action spaces to gain various benefits. Starting with the first player, everyone decides to either play action or pass.

You can perform multiple actions over several turns of the action phase, but each action can be executed once. Once an action has been performed, the followers that activated it are placed back into the bag.

During the event phase, everyone resolves the effect on the current hourglass tile. The event can have a positive effect, like providing income based on how developer the player is, or negative, like losing a follower or coins.

Even though there are a ton of actions to take, Orléans condenses to a rather simple gameplay loop:

During the first round, everyone gets a trader, farmer, craftsman, and boatman to start the game off. As the game progresses, you’ll want more followers to perform multiple actions during a round. To do so, you can advance along different tracks:

Other actions allow you to travel by ship or wagon on the game map, construct guildhalls and get development points. The beneficial deeds board will enable you to permanently spend one or two followers to gain rewards.

There are a lot more mechanics and rules to unravel, but this explanation should be enough to give you an idea of what you’re getting into. Orléans is a bit daunting at first, but the mechanics quickly become second nature, and then it’s all about the strategy.

Your First Game of Orléans

Orléans is an engine-building game, so some optimization will be necessary to achieve the highest score. Because I’d really like for you to fully enjoy the initial exploration of different strategies, I’m only going to point out things you should keep an eye on.

The farmhouse and the village are very important, especially in the early game. The craftsman provides a technology tile that permanently substitutes one follower; use this to your advantage as early as possible to gain more benefit over time.

The monks act as the joker card and can be placed anywhere, but not getting the benefits of the tracker is a serious tradeoff. You’ll definitely need a few to optimize your turns, but don’t overestimate their power.

The game map matters, as there are plenty of resources to take and opportunities to build trading stations. Remember that except in Orléans, the other settlements can only accommodate one trading station, so pick a travel route that will keep you away from the other players.

Lastly, in the later stages of the game, you’ll notice that you don’t need all of the followers you’ve accumulated. At that point, you can start using the unwanted followers in the town hall to get rid of them and gain some rewards in return.

I’ve generally never trusted the average playtime estimates as in practice most games last significantly longer than expected. With Orléans, I’ve actually had sessions that complete around the 90-minute mark, give or take some time for setup and packing up.

The shorter playtime is welcome in a genre where spending two and half hours on a session isn’t out of the ordinary, but Orléans is anything but a simple game. With so many different paths to choose from, there are a lot of strategies to victory, and the game will certainly feel fresh even after a couple of dozen sessions.

Even though the gameplay part doesn’t drag on, the same can’t be said for the setup. There are a lot of pieces to distribute and organize, with the game map being the most tedious part. Still, if you work together it’s not going to be that big of a deal.

The poor first impression has to do with the presentation of the game. You see the box cover and the game laid out on the table, and there’s nothing that will draw your attention and spark interest in the game. If you’ve gotten this far in this review, this isn’t much of a factor, but it’s a shame that a lot of people walked by Orléans without giving it a proper look.

The one issue you may encounter with Orléans is the analysis-paralysis syndrome, where someone starts overthinking their every move and by doing so, significantly extend the playtime. If you plan on playing Orléans, try to form a group of more experienced players that can make decisions more easily.

Orléans is a bag/engine-building game with a set of mechanics that sets it apart from other games in the genre. The game has a great pace and you’ll be fully engaged from the first to the final turn.

The depth and volume of mechanics mean that Orléans is not a game for beginners or casual players. The best experience can be had with players that have some experience with similar games and can make quick decisions.

Orléans has surprised me with how interesting, engaging, and challenging it can get. I wasn’t sold on the concept at first, as it all looked generic and uninspired, but once you get into the game, it’s an entirely different experience.

The synergy between mechanics works flawlessly; when working towards a more challenging goal, every step you take to get there matters, unlike in some games where a couple of rounds can go by with nothing happening.

The only issue I’ve encountered with Orléans is the difficulty curve. If you’re playing against someone less skilled or experienced, you’re guaranteed to win, which won’t be fun for either side.

Overall, Orléans is a game with a ton of well-executed ideas and mechanics, and I can fully recommend it. If you’ve got a larger party like me, you can get the 5th Player Box which expands the game and adds a solo mode.

We hope you enjoyed our Orléans review! There is a reason this board game has continued to top the charts for so many years. Have you tried Orléans before with your gaming group? We’d love to hear your thoughts! Drop a comment below and let us know what you think.

Lord of the Rings: Journeys in Middle-Earth Review