You’ve drifted wistfully off to sleep and been transported to a mysterious labyrinth. Pawing your way through its long and winding corridors, you must try and escape before time runs out. If not, this dream could end up being more like a nightmare. 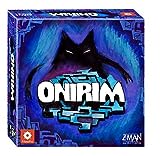 Onirim is a one-player card game that sees players explore a labyrinth of dreams (there’s a two-player version you can play, too). By placing cards from your hand, you have to try and find the eight oneiric Doors before your deck runs out. Careful though, in the deck, there are ten Dream Cards, which will make your task feel more like a nightmare.

This is primarily a game of luck, so your task will be to skillfully manage your card play and reduce your risk as you work your way through the dark corridors.

There are also seven expansions included in the box, which mix up the gameplay and make things a whole lot harder!

One of the best things about Onirim is the box and components themselves. In there, you’ll get:

The artwork on Onirim is what immediately stands out to me. If anything, having now played the game, it’s the strength of the artwork that really brings out the theme for me. The gameplay itself is loosely linked at best. But who cares when it looks so good? #shallow

This becomes immediately apparent once you take off the lid. Inside, leering out at you is the beast from your Nightmares – Incubus (it’s nicely-created using some fold-out cardboard pieces).

All the animation is beautiful, though, with vibrant colours and psychedelic graphics. It felt more like a spooky Quentin Blake creation book than a card game.

The rulebooks – you get two, one for the base game, another for the expansions – look great and, while a little lengthier than they perhaps need to be, are clearly laid out so you can follow the gameplay through.

Finally, I loved that the extra touches that Onirim comes with that it totally didn’t need to do. The insides of the box weren’t made out of crappy plastic or just cardboard. Instead, it had a suede-like feel to it, in a rich purple color, which feels – quite simply – awesome. You’re also provided with a really nice Incubus model which, as far as I’m aware, isn’t used in the game. But hey, it’s pretty.

Onirim is now only sold with a bunch of expansions in the original box, meaning you get some real bang for your buck. They add loads of new cards to the game, introduce entirely fresh rules, and add in additional conditions for winning. Some more simple than others.

The first, ‘The Book of Steps Lost and Found’, for example, requires you to unlock the oneiric Doors in a specific order (as if it wasn’t already hard enough!). To help you out, though, you’re also able to cast spells using cards from the discard pile.

‘Happy Dreams and Dark Premonitions’, on the other hand, introduces eight penalty cards to the game. These make the game a whole lot harder and are only slightly sedated by the Happy Dream cards, which grant you a bunch of new powers.

There are seven expansions in all, several of which can even be combined together.

Other Games in the Oniverse

How to Play Onirim

Onirim either can be played alone or as part of a two-team co-operative. In the solo game, you play the role of a Dreamwalker, who is lost in a labyrinth. Your goal is to try and find all eight oneiric door cards in order to escape.

Location cards – these are the bulk of the deck. Each one has the name of a location on it, a symbol (sun, moon or key) and a color (Red, Blue, Green, or Brown).

Oneiric Door cards – there are eight of these. You must find them all to escape.

Dream cards – if you draw one of these cards, you will have a nightmarish decision to make!

You will find throughout the game that you will need to shuffle some cards back into the main deck. When this happens, first put them aside into what is termed ‘The Limbo Pile’. At the end of each turn, all cards in The Limbo Pile are shuffled back into the deck together.

Each turn is made up of three phases:

In the first phase, you get to play a card. To do so, place one card from your hand face-up on the table. As you put location cards down next to each other, this represents you working your way through the labyrinth and exploring its murky interior.

On your first go, there’ll be no other cards on the table. However, for every subsequent go, you place the card slightly overlapping the previous one. The main rule here is that you are only allowed to play a card providing its symbol doesn’t match the previous card!

If you lay three cards of the same color in a row, then you get a door card of that color straightaway and can place it in front of you. Simply look through the pack, take it out and then shuffle the deck once again.

Reading a prophecy means you get to look and manipulate at the upcoming cards in the deck. Take the top five cards and discard one of your choice. Then, return the remaining four cards into the deck in whatever order you like.

Now you refill your hand back to five cards. There are three possible outcomes:

When you draw a Dream card, you must choose one of four options:

Then discard the Dream card.

If there are cards in The Limbo Pile, shuffle them back into the deck.

Winning or Losing the Game

Continue taking turns in this sequence trying to find the Door cards until you either:

The two-player version is very similar to the one-player. The differences being that each player has their own hand and there are also two Shared Resources cards that both players can use in the middle. Instead of unlocking eight doors together, you both have to unlock four — one of each color.

Interestingly, you can choose to either be completely open about all the cards you have in your hand, and therefore swap cards your partner needs through the Shared Resources pile, or play in silence.

Your First Game of Onirim

As you can see above, there are lots of conditions and decisions in this game. Don’t worry, it’s straightforward to play, but it’ll take a run-through to properly get a handle on all the rules and what effect your actions will have. Also, I strongly recommend only using the base game for your first few gos. The expansions can be added further down the line.

One easily missed rule, for example, is that if you make a sequence of three colors and get a door card, the sequence then starts again from one if you continue that sequence. You can’t have a sequence of four cards.

In terms of strategy, it will entirely depend on what’s left in the deck. However, always bear in mind that the only way to lose Onirim is to run out of cards in the deck. Therefore, make efficient use of cards a priority here. For example, while the objective of the game is to find the oneiric Door cards, don’t assume that your best option when you draw a Door card naturally is to spend a key card to acquire it. Key cards are hugely valuable for minimizing the damage of Dream cards to your deck.

Similarly, if you don’t have a key card, try to use the option to discard your entire hand sparingly. It is the quickest way to run down the deck.

Onirim is a really enjoyable solitaire experience. It’s telling that this was developed as a one-player game, rather than – like many one-player games – being tacked onto the end of a multiplayer as an afterthought. It’s easy to run through a quick game in about 10-15 minutes, and it says a lot how often you’ll find yourself constantly saying “oh, go on then, just one more.”

The gameplay experience is varied and fun, too. Sure, it’s a game of luck in many ways. You can end up totally depleting your deck if you draw two Dream cards in a row and all you have are sun cards. But it’s your job to turn than luck in your favor by reducing the risks.

The base game will likely get a little monotonous after a short while, but that’s the beauty of there being seven expansions. This dramatically increases the replayability — it’s unlikely you’ll find this game getting old. It’s impressive, too, how seamlessly the expansions fit into the game, too, thanks to an additional rulebook.

If you ask me, Onirim is one of the best solitaire games available, especially for travel. Being just a deck of cards, it’s easy to fit in an overnight bag and, considering the expansions only really add a few extra cards, you won’t just be stuck with a stripped-back ‘travel version’.

Also, I’ve touched on the artwork above, but this really is one of the most stunning games I’ve ever seen in terms of its artwork and design. I love the bold colors and psychedelic drawings.

One frustration is that this game does involve a lot of shuffling. And I mean a lot. Sometimes, to my shame, I did end up not shuffling the cards quite as much as I should simply because of shuffle-fatigue. Luckily, the cards are designed to make shuffling easy, but it’s still a little cumbersome.

Also, being designed as a single-player game, the two-player version suffers a little from the ‘add on’ effect. While it works well enough, if you’re primarily after a two-player co-op, you’re better off looking elsewhere. Onirim is a solo mission at its core.

Onirim is a solo-play card game in which players explore a labyrinth by placing cards from their hand onto the table. The aim is to try and find the eight Oneiric Door cards before the deck runs out, avoiding the nightmarish Dream cards as they do.

It’s a tough game, largely based on luck, however, there’ll need to be plenty of strategy incorporated to boost your chances of winning.

Aside from being a great solitaire game, Onirim grabs most of the headlines for what is a beautifully designed game, with fantastic artwork and superb attention to detail.

Easy to pick up and play with enchanting artwork, it’s not hard to find yourself ten games into Onirim without having come up for air. You get fantastic value for money with the seven expansions now included in the main box, which also means this is a game that will keep you entertained on many a Sunday afternoon or long journey to come.

While it probably won’t find its way out the box all that often to play with a friend, if you’re after a solitaire game then you’ll struggle to find one that works as seamlessly as this one.

Best of all though, it’s just great to look at. The vibrant-yet-surreal design of the game makes it a very memorable experience. You certainly won’t get tired of looking at it.