Oath: Chronicles of Empire & Exile is a game of warfare and conquest, diplomacy and deception as well as lasting consequences that are recorded in the annals of history.

Join me in this review as we explore one of the most exciting games to come out in the last few years!

From this point on, I’ll refer to the game simply as Oath to make the review more readable.

Behind Oath stands the trio of Cole Wehrle, Kyle Ferrin, and Leder Games, who’ve already made quite a name for themselves with one of the most popular board games — Root.

This has made the expectations for Oath quite high, with the Kickstarter reaching over $1 million. I’m more than happy to say that the game meets the expectations and creates one of the best board game experiences!

Sessions last between 45 and 150 minutes depending on the number of players, which ranges from 1 to 6. The best experience will be had with 4 players or more, but you can also enjoy it with 3 or in a solo mode. 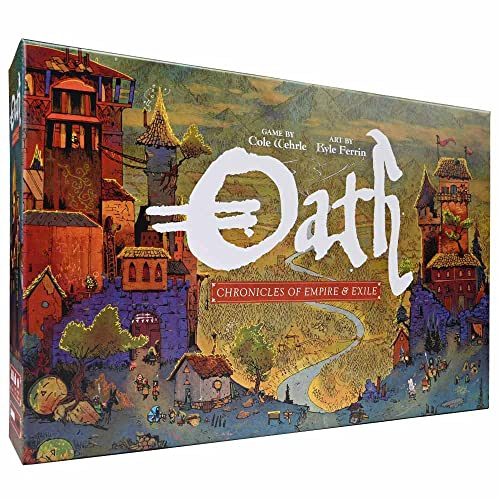 The game progresses between sessions, but this feature is optional and adapts to new players or different party sizes. It has a very high weight rating on BGG at 4/5, but learning it is well worth the effort as it can easily turn into your primary board game!

Oath is a game that can captivate you from the moment you get your hands on the box. If you’ve read my reviews, you know that I’m more of a pragmatic person, but Oath’s art style is so beautiful that even I was impressed. I’m keeping the box on a shelf in the living room as a decoration piece.

What surprised me when I first opened the box is how many pieces were placed on punch-out cardboard. This is definitely a plus as many of these pieces could have easily been regular cards that would likely need a sleeve to keep them from wearing out.

The Chancellor and all 5 Exiles have different artwork on oversized sturdy character boards. The backside of every Exile board contains a new design and mechanics in case they are promoted to the citizen role.

The metal coins are an absolute win in my eyes, and I wish more games used them, or at the very least moved away from punch-out cardboard currency. They’re double-sided and feature intricate engravings in the spirit of the game’s design.

The game map is made in a way I’ve never seen before — instead of foldable cardboard, it’s made out of the neoprene material used for thick mouse and keyboard mats. I should point out that the map is absolutely massive — 1.3 feet tall by 3.3 feet wide!

The cards have comic-like illustrations and have a rich and vibrant color palette. The important information isn’t obstructed and is easily readable even with the card placed on the table.

I’ve already gone on for long enough but I haven’t even scratched the surface. The tokens, box organizers, everything about Oath just screams high-quality and I cannot commend Leder Games and the designers enough for the effort put in the design and manufacture of the components.

How to Play Oath: Chronicles of Empire & Exile

Oath is quite a complex game, and a 32-page rulebook may intimidate you, but it’s one of the best-written rulebooks I have read. In this section, I’ll take you through the basics of the game to show you what it’s all about.

Oath is all about characters, their status, and positions of power. The Chancellor starts the game as the Oathkeeper of Supremacy and has to uphold the Oath to rule the majority of lands by having his warbands positioned on the regions.

All the remaining players start as Exiles, and each of them can fight to overtake the regions, rule the most lands and take the Oath as the Usurper. Alternatively, the Exiles can become Visionaries. This condition is achieved by drawing, playing, and subsequently completing the objective written on the vision card.

The Chancellor is in an obvious advantage from the start, but Exiles generally focus on stripping him of his lands before turning onto one another. Keep in mind that each Exile is different, has its own strengths and weaknesses which can affect your strategy!

The Wake phase favors Exile players, and they can check whether they satisfy Visionary or Usurper win conditions. Then everyone can use the rare wake cards if they’d like.

The Act phase is the most important part of the game as it allows players to take major actions. There are six major actions, which can be taken multiple times or combined, for as long as you have the supply to pay for them.

The major actions are:

Yes, you’ve read it right, Oath allows you to fight anyone for just about anything, including their relics, locations, pawns, and favor. The combat is a simple roll of defender dice vs the attacker dice. However, the dice have different faces, and generally favor defenders, as attackers can even roll a critical fail and lose a warband.

During the Rest phase, favor tokens placed on cards are returned to the favor banks, while the secret tokens are returned to their players. The supply is then refreshed based on the number of warbands you have in reserve — the more warbands are on the board, the less supply you’ll get!

There’s so much I would have to cover in this how-to-play section, from becoming a citizen to banners, bandits, and conspiracies, but I’d like to devote a section to the progression of the game through sessions.

The process is a bit complicated to explain, but you’re essentially preparing the game for the next session. An Exile that wins may offer other Exiles Citizenship and they’ll rule with one of your warbands rather than their own.

The Exiles and Citizens may choose their pawn’s site for the next game, and each player chooses an adviser. The Chancellor may start the game with the Darkest Secret or People’s Favor, depending on the Oath.

Your First Game of Oath: Chronicles of Empire & Exile

For all the complexity hidden inside the game of Oath, the learning process can be very flexible and suitable to your style of learning. From the page first proper page of the guide, Oath navigates you to specific sections depending on how you want to learn the game.

For a gradual experience with a lot of examples, there’s the rulebook. If you want a more packed and detailed explanation, read the Law of Oath guide. Lastly, for those of us that prefer to jump right into it, there’s a card-based setup and walkthrough in the guide.

The game wants to make stories and let everyone have fun, rather than push you into number-crunching and min-maxing. There’s a lot of room to house-rule and tailor the experience to have as much fun as possible.

My group has a dose of competitiveness but we’re pretty laid back when it comes to honoring the “touch” rule, so we let people redo actions, show card draws if someone’s stuck, or in general, be helpful if their choice of actions doesn’t immediately concern you.

The amount of information you’ll have to take in is daunting, to say the least, but stick with the rulebook and it won’t be such a dry and taxing experience as is usually the case with games of this difficulty.

The art and component quality of Oath is on a level I rarely see. In a world where crossovers between video games, animations, and comics have become frequent, I honestly want to see a children’s book or a cartoon with this art style.

Only a few players love the initial hurdle of learning the rules, but most of us prefer a more digestible experience and to get to the fun part as soon as possible.

Oath’s rulebook has been designed to allow several learning styles, from preparing before the game to learning as you go. This significantly reduces the burden on the new players and makes it easier to get a larger group together.

The last point is also mentioned in the cons in another light, but here I want to point out just how much value Oath brings. The game can be played by 6 players, something I needed as my group grew. It also has fluid game persistence and is generally enjoyable no matter the conditions.

The cons section only has one point, but it’s layered. To preface this point, Oath at its worst is still a good game at the very least.

The enjoyment of the game definitely varies depending on the number of players and player persistency. While 2 or 3 players can work with the automated player, the game needs 4 or more living players to really show what it can do.

The same applies to optional persistency. Yes, Oath can be played anew every time with different people, but it’s a much richer experience if you keep the chronicles and progress the story.

Oath: Chronicles of Empire & Exile is a rare breed among board games and something you should definitely experience if you have a passion for games.

The captivating art, high-quality components, and most importantly interesting, deep, and infinitely replayable gameplay loop are just a few qualities of Oath. Don’t miss out on one of the best board games to come out in the last few years!

I approach every board game that I review with a positive attitude, but sometimes a game will just not sit right with me and skew my view slightly towards the negative side.

Oath: Chronicles of Empire & Exile is the game I’ve been looking for all my life but didn’t know existed. The ability to play with the 6th player means a lot to me, as my group often consists of couples, and more is always merrier.

Our go-to game so far was Terraforming Mars, as it had a perfect balance of game length and depth. Still, considering that we meet on a weekly basis, we needed something else.

Oath provided us with a similar experience, broadly speaking, but the one we could transfer to our next session and enjoy even more. Learning the game wasn’t easy for the enthusiastic wives new to the hobby, but we all helped each other and made the experience fun.

I understand that the game is expensive, twice as much as some of the other really good games. I’m not sure if would recommend it as your first purchase, but if you’ve reached the point where most games don’t cut it, take the leap and invest in one of the best board games you’ll put on your shelf, or rather, always keep on the table, ready to play!

We hope you enjoyed our Oath: Chronicles of Empire & Exile review! As one of the best games of 2021, it’s definitely something you should check out if you haven’t already. Drop a comment below and let us know what you think! We’d love to hear from you.