The #1 site for board game enthusiasts

Why Monopoly is the Greatest Game of All Time

Webster’s dictionary defines sarcasm as “a mode of satirical wit depending for its effect on bitter, caustic, and often ironic language.”

Monopoly is probably the most inflammatory game of all time. It is undoubtedly a classic and household staple, yet there is more hate poured into this game than the Sauron poured into the One Ring. So how is it that a game can be universally despised yet be on the shelves of millions of homes?

Let’s dive in and take a look at what makes Monopoly the soul-crushing, vampiric nightmare that sucks out your will to live. 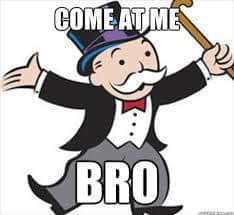 At the core of its gameplay, Monopoly is random.

There is a degree of strategy with all games, but strategy means nothing if you are still 100% dependent on dice rolls to land on the properties you need. The most ironclad strategy falls apart if you can’t land on an open property to buy, so short of making a sacrifice to the RNG (random number generator) gods, you have to rely solely on luck.

The Community Chest and Chance cards are also highly random. Landing on either spot could get you into hot water and debt rather quickly, so there’s no guarantee that either one will be definitively good or bad for you.

The game is highly unfair and that’s by design. The first player to get a complete set of properties and puts down the first houses will likely win the game. Sure you can trade, but for the most part, trading always favors one side over the other. It’s the rule of supply and demand and if one player has all the supply and you are the only one demanding, well, then it’s going to be rather expensive. Trading then becomes an exercise in who can guilt your friends and family the hardest into giving you what you want.

Life is unfair. Get used to it.

So why does the game that clearly favors one or two players and is highly unfair even exist?

Well, the short answer is to learn that it’s unfair.

There’s a lot of controversy on where the game was first designed and who owns the patent on what, but if you look back in history, it was based on the Landlord’s Game designed and created by Elizabeth Magie in 1902. She designed it to illustrate certain economic philosophies of the time, namely that the rental housing system was designed to keep wealthy landowners rich and to keep tenants poor and at the mercy of the landowners. Sound familiar?

Charles Darrow turned it into Monopoly and sold it to Parker Brothers in 1935. (Parker Brothers actually did purchase the rights from Magie as well, whereas Darrow claimed the game was his own invention.) Eventually, Hasbro bought Parker Brothers, and the rest is history.

Political dogma aside, the game emphasizes Magie’s point beautifully. The first person to own a colored block of land is usually going to be the supreme overlord of the game. With such high imbalance, a lot of players tried to even the odds with house rules that attempted to even the playing field. Things like the Free Parking jackpot were never in the rules. Concerned parents would sometimes give out bank loans & IOU’s, or wipe out debts entirely for a trade of a utility property. This never really evened the playing field, but just extended the play time for the inevitable conclusion of owing your older brother a small fortune (I’m not bitter).

I might actually die of old age before this game ends…

This leads us to one of the most common complaints about Monopoly: the games takes so long. Well, they don’t have to if you play by the rules. Playing by the rules, however, runs adversely to most people’s nature. If you sit down to play a game with a group of people, naturally they are going to be your close friends or family.

Very few people are draconian enough to demand harsh penalties against those they love–unless we’re talking about the most competitive people around. This leads to deal-making, immunity, and debt forgiveness, which only causes the game to go on and on, seemingly indefinitely. But to win in Monopoly, you have to be bloodthirsty. There’s no room for mercy or charity–only ruthlessness.

The game we love to hate 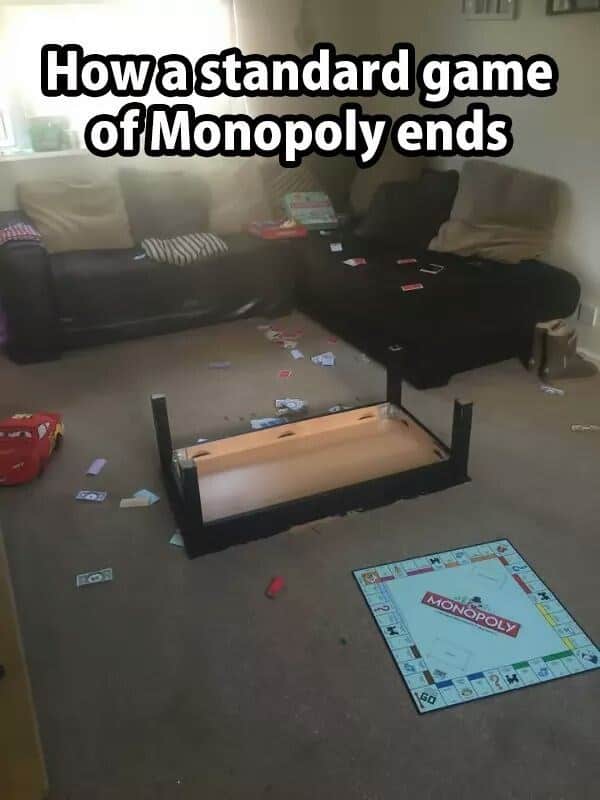 Almost everyone has played Monopoly and depending upon your gaming personality, you’re going to have a different experience.

During one particular game, several members of Kendra’s family (I won’t name names but you know who you are) actually stopped talking to each other for quite some time because of a game of Monopoly. This is, unfortunately, a very common scenario, and it’s by design.

I love games. To me, it’s about the shared social experience I have with my fellow players around the table. Competitiveness and winning are secondary to me. I actually used to play Monopoly on an almost daily basis when I was in the Navy. My shipmates and I would get off work and go home to play the electronic credit card version of Monopoly (math is hard) with one of their wives and some buddies almost every day. We had a blast. We played games in rapid succession with a pile of empty beer cans stacking up and we would eventually scream and threaten each other with physical violence until the next game started.

So after all of that, why is it still so popular?

Nobody is clamoring for the midnight release of the Game of Thrones version of Monopoly, but I’m sure when you see Goldenopoly, a Monopoly version based on golden retrievers, you’ll chuckle and some heavily-censored, nostalgic memory will come up of the last time you played Monopoly. It’ll end in tears, of course, and you’ll be staring at a cute golden retriever on the board while someone smugly asks (demands) you pay your rent.

It’s a terrible game and yet has sold over 250 million copies. You (the reader) probably hate Monopoly, but what are the odds that you have a beat up, dusty version of it hidden somewhere in the house?

Perhaps the reason for its popularity and commercial success is the variety of “-opolies” out there. Kendra alone has Lord of the Rings Monopoly, Christmas Monopoly, Pirates of the Caribbean Monopoly, Klingon Monopoly, Goldenopoly, Wineopoly, Philadelphia Monopoly, New York City Monopoly, and Medical Monopoly. I don’t even think she’s unwrapped some of those. They look so fun with all their themes, but they are still just Monopoly…

For me, Monopoly is too close to home. It’s real life masquerading as a game. It’s debt, rent, jail, and bills. Who likes any of that? I like playing games for the fantasy, the creative experience, the imagination–and yeah, who am I kidding? The escapism, of course. Monopoly is the opposite of that. It’s like going to the office all day and then coming home to the office for the day.

After poring over dozens of articles and forums trying to figure out why this game is universally hated yet still around, I still don’t have an answer–but I do have a suggestion. Pull out your dusty old board of Monopoly, and reread the rules. Get rid of all the house rules and play it as it’s meant to be played. Play with the understanding that this was a learning game designed to show the political philosophy that landowners kept tenants poor. The game won’t drag on and you might have a different experience.

If that all fails and the table gets flipped, then play Wineopoly and pop open a bottle matching the space you land on. I guarantee you’ll have fun with that. Or you can just play Catan instead. 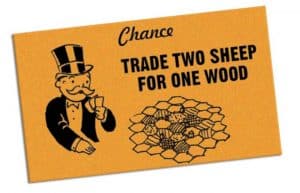 I’m almost hesitant to write this, but I would love to hear your thoughts and ideas on Monopoly.

Best Board Games Under $30 Ranked & Reviewed