Valskyrr is a barren, snowy wilderness. Teeming with eldritch monsters and plagued with impassable terrain. But it’s still home.

Does your band of warriors have what it takes to stop it descending into misty darkness? Read the full Mistfall Board Game Review below.

A hefty co-operative fantasy adventure, Mistfall is an RPG game for 1-4 players. Although largely card-based, there’s a host of different mechanics going on here to make it more than your bog-standard dungeon-crawler.

With multiple quests and heroes to play, there’s a lot of detail to get your teeth into. But, no matter which ones you choose, you’ll have to traverse perilous terrain, battle devious monsters, and wield magical items in the name of reaching your objective.

There are two expansions to the original Mistfall. These are:

Sand & Snow introduces 110 new cards into the deck to mix up your Mistfall experience. This includes a new type of enemy, the Lieutenant, and a bunch of new loot to uncover. 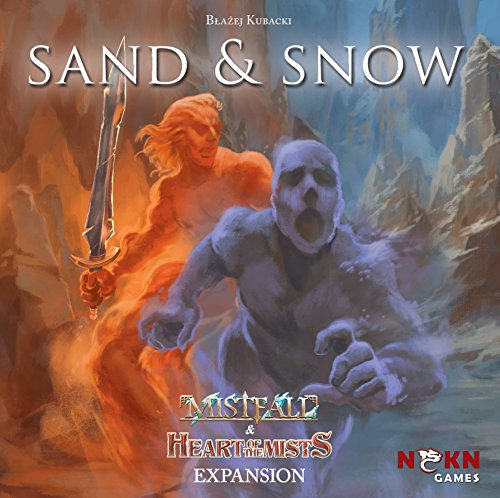 Valskyrr, named after the magical land in which Mistfall is set, introduces a campaign-style play to the game. New types of loot, enemy and time cards adapt how the game evolves. 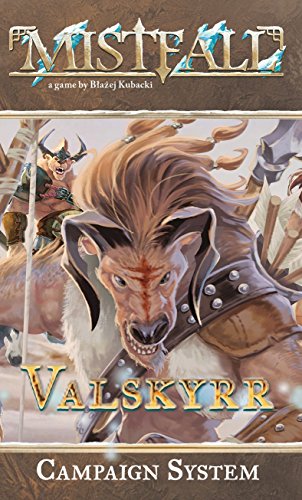 Other games in the Mistfall universe

Alongside the expansions, there are also three other games that are set in the Mistfall universe. Chronicles of Frost, Heart of The Mists and Shadowscape are all standalone games for those that can’t quite get enough of its cold and icy story. What’s more, most of the components can be mixed together to create further variance on the original. 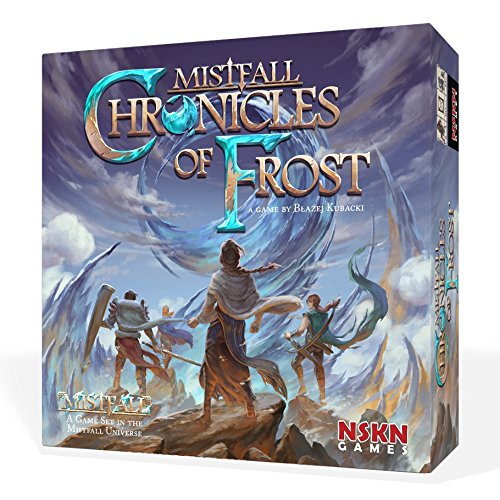 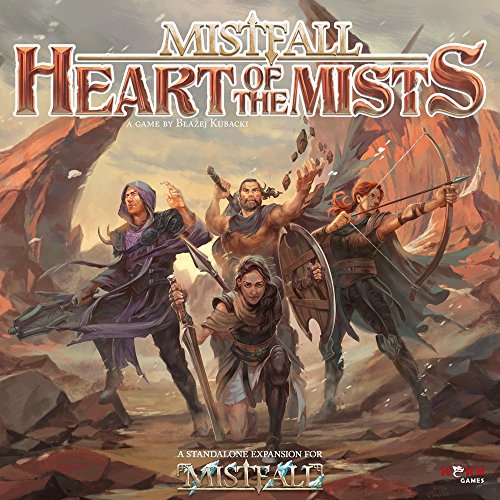 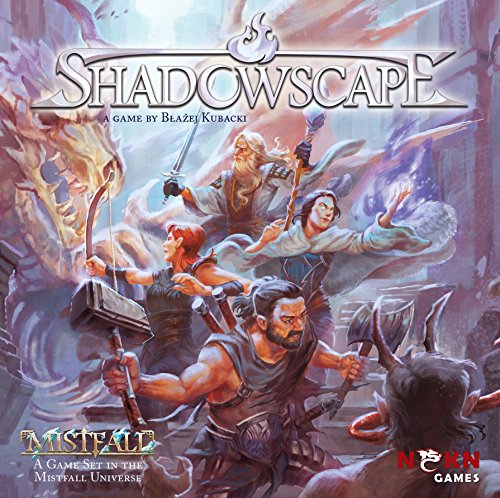 When unboxing Mistfall, you’ll find that it’s not just a whole bunch of cards. You’ll get:

First off, there are lots of cardboard pieces to punch out, which adds a nice extra layer to the gameplay. The location tiles are the main source of fun here, which are well made and fit together nicely. The cards themselves were a little flimsy, though, which was disappointing.

Oddly, for a fantasy game, I found the artwork in some places to be a bit of a letdown, too. Quite simply, there just isn’t enough of it. This is most notable in the rulebook, which is basically just one big long text manual. It may as well have been an MS Word document using Times New Roman, size 11.

Where the artwork does shine, though, is on the location tiles and enemy cards. These looked great and it’s a shame it wasn’t followed through across the rest of the components.

The rulebook was also rather confusing in terms of layout. When reading it for the first time, I found myself several times leafing through to clarify what something meant, only to find there was no answer. Whereas it became very frustrating breaking up play to check something only to have to re-read the entire thing again just to find the information we were after.

Aim of the Game (and how to lose)

The aim of Mistfall is to work your way from location to location until you uncover the Special Encounter, which you must then complete. If one of you should die before the Special Encounter is active, or all of you die once it has been activated, then you lose. You will also lose if you run out of time on the Time Track.

To begin, choose the quest you want to play. Although, note the Into The Wilds quest is specifically designed for those playing their first game.

Then, each player chooses one of four heroes, along with their relevant card decks and a Hero Charter, which gives you all the key information about your character. Then sort the decks, layout the locations, select the enemies and arrange the tokens as instructed in the rulebook and your specific Quest.

You also have to set up a Quest Charter, which tracks your progress through the quest and how much time you have left.

There are a whopping seven phases per round in Mistfall. Most of the time your team will be looking to complete Encounter Cards, at the same time as exploring and improving their load-outs. An Encounter Card will remain active through several rounds, and each time a new one begins it will mean more enemies come your way.

The rounds are played out as follows:

If there is an active Encounter Card, follow its instructions and populate the board with any enemies that it specifies.

Enemies make their movements, as described on their cards.

This is when things get interesting. Now your team can play cards and initiate any effects and actions that they have available to them. You could attack enemies, use special powers or take other actions to help your team to complete the Encounter objective.

You guessed it. Now it’s time for the enemies to make their attacks.

Now you can check if you’ve satisfied any of the requirements for completing the Encounter Card. If so, collect your rewards!

Finally, take a time card, resolve its effects and move the Time Marker down the track.

While being a largely card-based game, Mistfall has an innovative game board system. It’s made up of location tiles, which are laid out depending on the Quest you’re playing. You must reach the Final Location in order to turn over the Special Encounter card, which you must complete to win the game.

Each location has a Danger Level that can increase or decrease depending upon your characters’ actions. Safe locations will mean no new Encounter Card will need to be drawn. Perilous or Overrun locations, however, are more tricky. There’s also a Restoration Level for each location, which affects how effectively you can rest and heal while on the tile.

Gear, on the other hand, is equipment that grants you other special actions, like the Amulet of Protection. Each character starts with a few pieces of Gear, prescribed by their Hero Charter, but can also acquire more throughout the game to prepare them for the final challenge.

This is a very basic overview of Mistfall and its many features. There are plenty of other mechanics to this game that make it far more complex.

As the game goes on, your team moves through rounds, solving encounters, collecting currency, purchasing new skills and tools, defeating enemies and, ultimately, preparing yourselves for the final task. All this, hopefully, without losing.

Your First Game of Mistfall

I can’t be the only person who found Mistfall difficult to master on the first go. It’s a complex beast, with lots of moving parts and things to track. And, as mentioned, you’re not given much help from the rulebook either!

My advice is to just dive straight in and follow the introduction scenario – Into the Wilds – and work it out as you go. A lot of it won’t make sense until you’re actually doing it, and you’ll realize that many of the action points in the over-complicated rulebook are mere ‘just in case’ considerations, rather than things you need to do each turn.

I found, too, that the intro scenario isn’t fantastically designed for gameplay. It’s short and won’t necessarily give your team the time it needs to prepare for the win. But don’t worry. I recommend playing through a few times – win or lose – to get the hang of it, then moving on to the real deal.

As mentioned, there’s a number of overlooked bits in the rulebook that can cause confusion. One example of this is that, in the first round, you should ignore the reinforcement stage. This seems obvious once you’ve played and understood how rounds work, but when you’re playing step-by-step through the game for the first time there’s absolutely no mention of skipping it.

There’s a lot to get your head around in Mistfall, which will mean it isn’t for everyone. However, if you’re willing to take the time, then you’ll realize that the many mechanics and features of the game aren’t just for glamour. Rather, they’re well thought through and make for a really immersive and engaging co-operative experience.

The keyword mechanic is a great example of this. This is where, if you’re in a certain location, you only draw out encounters or monsters that share the same keyword (for instance, Wilderness or Deadlands). It can be a bit fiddly finding the cards, but it means you only draw monsters relevant to that location, keeping the game’s components thematic and relevant to where you are.

It was a bit frustrating rifling through the rulebook all the time, but rarely did I find myself going “why did I just get made to do that?”

On top of that, Mistfall is a truly interactive and co-operative adventure. You have to make multiple decisions as a team, including in what order you take your actions. This means you can formulate complex strategies together and create combos that can totally turn the flow of the game. Many of your available actions are designed specifically to support your fellow warriors, too, such as using ranged attacks. It builds a strong sense of camaraderie.

Also, with so many moving parts (let alone the inclusion of seven characters and multiple quests) you’ll find there’s an endless amount of strategies and tactics you can use to win. So you won’t be repeating yourself any time soon.

Mistfall is certainly not a pick-up-and-play endeavor, though. While all the mechanics certainly added to the game, there’s a lot to remember and you will need to refer back to the rules on many an occasion. This can make it a little fiddly.

Sadly, the complexity of the game is only accentuated by the obtuse rulebook, which was frustrating in and of itself. For a game this intricate, it just has to have an intuitive and masterly rulebook. This is not the case with Mistfall, which seems to have veered towards quantity rather than quality when it comes to the use of words.

Mistfall is a card-based, adventure fantasy co-operative game. Your team of up to four warriors works together to tackle encounters, defeat monsters and solve missions on your journey to complete your quest.

There’s a great deal going on in Mistfall, meaning it’s certainly not a pick-up-and-play adventure. However, the multitude of rules combine to create a hugely immersive and rich fantasy experience, which is absolutely worth embarking upon – providing you’re willing to put the time in to learn them.

Mistfall is an acquired taste, there’s no doubt bout that. For first-timers or those looking to melt into a relaxing evening with an easy wind-down after work, you should perhaps look elsewhere this time. It’s certainly not going to be a simple first game.

However, if you’re comfortable with a long learning experience and regularly having to refer back to the rules, Mistfall can be hugely rewarding. The intricate mechanics mean it stands out above many other co-op fantasy games in terms of levers to pull and buttons to press. The potential for in-depth strategy can be invigorating, with your team regularly finding themselves immersed in lengthy planning sessions for each turn. It makes for a really exciting and engaging co-operative adventure.

Mistfall may sometimes start to feel a little unwieldy. But, if you ask me, it’s worth the blood, sweat, and tears to master it.