When I found out that Machi Koro meant ‘City Town’ in Japanese, I was a little disappointed. For a game title that initially sounded pretty cool, the translation ending up feeling a little silly and simple.

Yet that is an almost perfect summary of this game… and that’s not necessarily a bad thing. 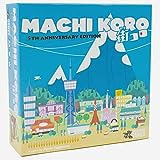 Machi Koro is a fast and to-the-point resource management game. You’ve just taken over as mayor of an up-and-coming city and your citizens are eager to stake their place on the map.

The challenge: you’re not the only one trying to do so!

Using only dice, you must construct public buildings and keep the city purse flush as you expand your metropolis to be the dominant city in the region. And, if you run a little short on cash, don’t worry. You could always steal it from a neighbor…

Despite being set in the same location as the original Machi Koro, it’s apparently only now that your citizens have noticed that big blue wobbly thing next door: water!

This fishy expansion includes several new maritime establishments and landmarks and opens the game up to five players.

Whether or not it’s your first game of Machi Koro, the Harbor expansion is well worth considering as it adds some great new elements and variety.

Millionaire’s Row is another straightforward expansion, introducing a host of new establishments to liven up the town and your card combos. Additions include a cornfield, a moving company, and a loan office!

Admittedly, they could have come up with something more exciting… (an arcade, a toy store or an Irish pub, anyone?).

But don’t let the rather drab line-up put you off, it adds a lot of color to the game.

Bright Lights, Big City isn’t an expansion, but a reimagining of the original game that irons out the frustrations some players had with the original. It packs in several new establishments and landmarks, and also allows you to play with five players.

The main difference, though, is that the game set up is now randomized, meaning each time you play is different. 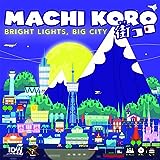 The legacy version of Machi Koro is one of the newer Legacy games to hit the scene. It takes a lot of the original gameplay, but as with all Legacy games it gives weight to the decisions you make throughout the game.

It took Gen Con by storm and (no spoilers) is a lot of fun. Surprisingly, this is one of the legacy games that you can play over and over and still find something new.

Much like the name, Machi Koro doesn’t waste time with nice-to-haves. You get:

Straight off the bat, it has to be said that Machi Koro has striking artwork. With its distinctive block-blue background and colorful, kooky graphics, I was endeared to the game before I’d even opened it.

The only ‘character’ you’ll see is a picture of a mayor in the rulebook (although I don’t know what role this specific guy plays) and his dog companion (I’m gonna call him Spud). The rest of the city would appear to be deserted. Yet, despite this, the playful, bright design really brought it to life – and besides, who can’t get excited at the prospect of owning a cheese factory?

In terms of components, there’s not a great deal to shout about. This is, essentially, a card game with a couple of dice thrown in for good measure. The cards themselves are of decent quality, with a shiny finish that proudly displays that great artistry. While the dice are perfectly adequate, too, although you only get two in the game, rather than dice for each player.

You’re provided with some cardboard tokens as well, to represent the coins. I’m always a little underwhelmed by cardboard tokens. But, again, I liked how bright and bold the colors were.

How to Play Machi Koro

To begin, each player is given a bakery and a wheat field, which are placed face up in front of them. You also get four Landmark cards (a train station, shopping mall, amusement park, and radio tower). These go face-down in front of you to signify they are under construction.

Then, create individual decks of each building type and place them face-up in the order of the number at the top of the card (this shows you what you need to roll in order to activate them). You’ve now created the marketplace.

Finally, give each player three coins.

First off, roll your die. To begin with you’ll have just the one, however once you build a train station you get to roll two.

Now, you get to earn coins based on what you rolled in the previous phase. If you are rolling two dice, add the two together.

All buildings with a corresponding dice roll number (including some belonging to your opponents) are activated. If you roll the right number, different types of building respond in different ways:

If it’s your turn, many of the buildings can provide you with special abilities, as well. For example, the business center lets you trade one of your lesser buildings with another player. Or the mighty cheese factory lets you take three extra coins for each ranch you own.

Also, note that when resolving the roll, you should activate cards in the following order: red, green, blue, purple.

The final phase is your opportunity to build something. You can only construct one building per turn, so make it count!

To do so, pay the cost of the building as shown in the bottom left-hand corner of the card. This is taken from the central marketplace, unless you choose to build a landmark. In which case, you flip over the card in front of you.

Now it’s the next player’s turn.

There are four landmarks in the game: the shopping mall, radio tower, train station and amusement park. Landmarks, alongside needing to be built to win the game, will grant you special abilities. The radio tower, for example, will let you re-roll your dice once each turn. While the train station grants you two dice each go. So, these should be the top priority when deciding what to build.

The game ends when a player has built all four landmark cards. On the construction of the final one, all play stops and that player is crowned the winner.

Your First Game of Machi Koro

When first starting the game, all players start out with only bakeries and wheat fields. This means that everybody is stuck just waiting for someone to roll a one or a two on their turn. Things will pick up, but might move a little slow to begin with.

As a result, think carefully at this stage about the best way to build up some decent cash without having to shell out too much. I, for example, found in a four-person game that purchasing a couple more wheat fields and ranches was an efficient way to grow my kitty, as they had a chance of being activated on every person’s turn.

When it comes to resolving payments, bear in mind that if a player doesn’t have enough to pay a debt, then they only pay what they can afford. This sometimes means the receiving player loses out, even if the player in debt receives income later in that same turn.

It’s possible, too, that you’ll have two people that are owed money. Say, if two players owned a cafe each. In that instance, payments are made in counter-clockwise order. This means that should the player only be able to afford one payment, the second player will miss out.

Machi Koro is really fun. There’s no doubt about it. It’s fast-paced, engaging and challenging. But, most of all, as already mentioned, I love the way it looks. Before even playing the game I knew I’d like it just because of its jolly and colorful design and the pleasant little world it has created. Sadly, it’s entirely fictional (believe me, I checked).

On to the game itself, though.

Machi Koro is an ideal entry-level strategy game for younger people or those new to gaming more generally. It’s really easy to learn and quick to play, and you don’t actually need to use strategy if you don’t want to. You are just rolling a dice and hoping for the best, after all.

But there are lots of ideas in there to get the mind ticking. What’s the best building to buy to increase my income in the long-term? Should I just focus on the big-ticket items or rely on the smaller, more reliable earners…? These are big decisions to make.

It works well as a way to introduce newbies to concepts they’ll come up against in the more complex games, such as manipulating the odds or managing risk. It’s really fun, too, working out how the resource cards interlink, letting you create some killer moves that can be the source of some very satisfactory pat-yourself-on-the-back moments when the right numbers come up.

However, beyond being an entry game, it’s simplicity, for me, is also Machi Koro’s downfall. The one-dimensional gameplay means it’s doubtful that you’ll be rushing back to play it once you’ve moved onto more complex options. While its replayability is seriously limited by the fact that after a few games the best strategy for winning is quickly going to become quite obvious. Once most players have figured this out, it really only boils down to a game of chance as to who is lucky enough to get the right rolls.

Also, I found the player interaction to be a little underwhelming. I suppose this is a builder rather than a wheeler-dealer style game, but that undermines its competitiveness for me. You don’t win this game by thwarting your opponents’ plans, you simply just try to build yourself up and up as quickly as possible. Less battle of the wits, more arms race of the bricks.

This is a big drawback for me compared to similar games out there where, sooner or later, your strategies are bound to come into conflict. Machi Koro, though, is very siloed.

Machi Koro is a fun and simple card and dice strategy game for 2-4 players. Your mission is to grow your city and earn income as you race to be the first mayor with four landmarks.

With a charming design and beautiful artwork, this would be a great introduction to the genre for newbies. However, its one dimensional and rigid gameplay means the base game may become a little repetitive after a while.

As an entry-level strategy game, it does the job really well of being simple to learn and provides ample opportunity for learning how to manage risk and odds. It’s perfect for the younger ones looking to earn their first strategy badges, and still a good challenge for the more seasoned gamer.

The problem for me with Machi Koro is staying power. Gamers that regularly play together will find that, after a few goes, there’s not much new left to unearth. Instead, every player will be working away, heads-down, on the same strategy, with the only thing separating the winners from the losers being the roll of a dice. For some people that’s not a problem. But, for me, a strategy game with only one winning strategy will get old pretty quickly.

Thankfully, the expansions go a long way to extend the replayability. But as a base game, its lifetime is limited.

Have you tried Machi Koro? We’d love to hear your thoughts. Drop a comment below and let us know!