Dungeons & Dragons: The Legend of Drizzt Board Game Review

Following the success of Castle Ravenloft and Wrath of Ashardalon, Legend of Drizzt is the third installment in the D&D board games lineup. If you’re looking for a more condensed D&D experience or more content inspired by the Legend of Drizzt novels, this board game is the way to go.

Read the full Dungeons & Dragons: The Legend of Drizzt Board Game Review below. 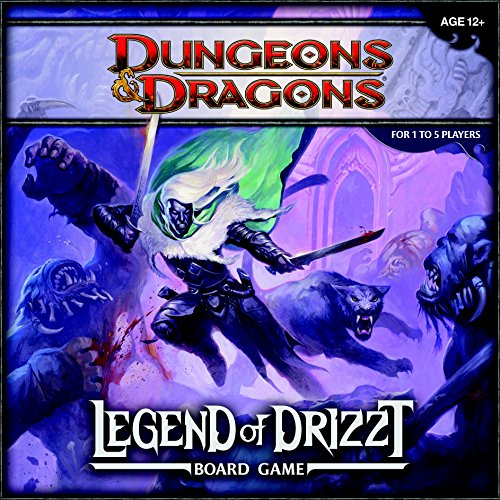 Brief Overview of The Legend of Drizzt

The Legend of Drizzt is an adventure dungeon crawler board game for 1–5 players with scenarios that will require you to work together with other heroes to survive and win, but also some that put a spin on things and make you compete against each other. As it takes roughly an hour to complete a scenario, it will make for a nice alternative for D&D fans that can’t make up the time for a full campaign.

If you’ve played classic D&D or one of the prior board games, you’ll feel right at home. New players can be brought up to speed quickly, as the game is best learned through playing and encountering new mechanics.

Unboxing The Legend of Drizzt

In the box you’ll find the following components:

The cards, markers, and tiles are all pretty standard for a board game and you won’t find any surprises there. However, the miniatures are what makes or breaks a game like this and you’ll be happy to hear that just like its predecessors, the Legend of Drizzt has some amazing hero and monster figures.

Errtu is a Balor – one of the mightiest demons in the D&D universe, is the largest figure in the set, spanning 3 tiles in length and width. While all of the models are nice to look at, the Medium Water Elemental and the Yochlol stand out the most thanks to the transparent-like material which gives them a watery and ghostly appearance.

You shouldn’t be surprised if you hear that some people are buying the Legend of Drizzt almost exclusively for its miniatures. Even if left unpainted, they make for a great addition to the monster collection and can be used to enrich your next D&D campaign.

The one issue you might come across is the bent swords, staves, or wings. As these are packed together in a few plastic bags, it’s not uncommon for them to get slightly damaged by the time they reach you. Thankfully, it’s very rare for a piece to break off completely, and most issues can be solved by carefully returning the part to its original position.

How to Play The Legend of Drizzt

If you have played Castle Ravenloft or Wrath of Ashardalon in the past, there are only a few game-changing mechanics to take a look at, much like the experienced D&D players. Still, let’s go over the most important rules and turn order, for a better understanding of the gameplay.

The first thing you’ll have to do is pick a scenario from the adventure book. Take a deck of cards (Starting or Advanced), the sequence of play cards, dice, figures, and all of the pieces specified in the “Adventure Setup” section of the adventure book.

Place the Start tile in the center of the table, unless otherwise specified by the adventure, and put two Healing Surge tokens next to it. Each player picks one of the 1st-level Heroes, along with their Hero card, figure, and Power cards.

The number of Power cards is determined by the text on the Hero card. Place the hero figures on the Start tile, unless stated otherwise, and check the “Starting Awards” section of the adventure’s setup for any extra conditions. Once you’ve set up the Cavern tile stack per instructions, you’re ready to begin your adventure!

To achieve victory in the Legend of Drizzt, players need to accomplish the objective specified by the adventure they’re playing. It can be anything from defeating a powerful creature, to preparing for a massive assault of monsters.

Healing surge tokens represent extra lives, and are shared by the whole party, and have to be used by a downed Hero. Once all of the tokens have been depleted, the players will lose if any Hero’s HP drops to zero. Each adventure has its own specific win and lose conditions, so make sure you’re familiarized with them.

Once you have selected the first player, the game can begin, with the play progressing clockwise. A turn of each player consists of three phases:

During the Hero Phase, your Hero can move in any direction, with the distance determined by their Speed. Movement into squares occupied by a monster or into a wall is prohibited, while moving into another Hero’s square is allowed, as long as the movement does not end there.

Combat is exactly what you expect from a D&D board game. Attacks are made using the Hero Power cards or the ability of a Treasure card. Once you’ve picked a target in the range of your Hero, roll the die to determine the combined power of your attack. If it’s equal or greater than the Armor Class of the target, the attack hits and lowers its hitpoints.

Defeating monsters grants experience, which can be used to level up or cancel an Encounter card. Balancing between the two options will be the key to success. The Encounter deck as well as Monster’s tactics have plenty of nuances to them and are best learned through playing the game, and I’m sure you’ll appreciate the added element of surprise.

Your First Game of The Legend of Drizzt

There are a few key things you can do to make your first game of Legend of Drizzt enjoyable without being overwhelmed by all of the mechanics.

For the first couple of games, use the Starting Deck featuring 100 cards better suited for new players. If you’re playing solo, the Adventure book recommends “Adventure 1: Exile”, otherwise “Adventure 2: Search for Mithral Hall” is the way to go.

Each Hero has a lot of Power cards, but you can use the ones recommended by the Adventure book for the best balance of abilities. Work together to figure out the next step, especially when it comes to movement, as it’s by far the easiest mechanic to mismanage.

The difficulty of an adventure can be adjusted by adding, or removing a Healing Surge token, but other than that I do not recommend making any house-rules as they might break the balance of the game. Keep the rulebook close and make sure no card is misunderstood and misapplied.

If you’d like to play new scenarios, you can always check out the Dungeons and Dragons website for more adventures. With all of that in mind, you’re more than prepared to handle the unique adventures Legend of Drizzt has in store for you!

Pros & Cons of The Legend of Drizzt

What I really like about the D&D board games is the compatibility between them. You can mix and match monsters, heroes, and even some adventures to create your own ones or play the additional ones available on the website. This means that every subsequent D&D game adds more value not only to the previous one but to itself as well.

However, I have placed replayability in neither pros nor cons as that purely comes down to your thought process. Isolated from the extra content, the Legend of Drizzt has 12 adventures, which might seem like it’s too few, and that you might complete the game before you’ve had your fill.

While that’s completely understandable, if you take into the account that you might not succeed every time and would like to try a different hero, you can easily get a few dozen sessions out of this board game, and that’s before you add any of the free adventures from the D&D website.

I won’t go into the miniatures again, but they’re definitely one of the main perks of getting the Legend of Drizzt board game. As for the gameplay, the progressive difficulty of adventures helps bring new players in, while the competitive scenarios have you race other players to the goal or even fight them as a villainous hero.

The cons come down to limitations of the board game format, and personal taste. If you’re looking for a universe expansion of the Legend of Drizzt novels or to relive some of the stories through the game, you won’t find that here. And when you think about it, there wasn’t really a way to convert anything but the important battles and the setting into a short-format board game.

However, don’t think for a second that the source material has only been used as a placeholder theme to grab people’s attention. This part could easily go into the pros section, as nearly every detail from the books has been used for the Hero design.

From a person who’s vaguely familiar with the novels to those who read all 36 novels, there’s not a person that won’t be impressed by the game’s attention to detail, and the effort to capture the essence of the novels.

I doubt there’s anyone who’s unaware of how D&D combat works, but if you’ve come here thinking that Legend of Drizzt will put a spin on that, I have to let you down. Each attack puts a lot of weight on a successful die roll, and it does take away some of the control from the player.

The Legend of Drizzt Review (TL;DR)

Legend of Drizzt does an excellent job of taking as much as it can from its original source to make a tense and exciting dungeon crawler. Intuitive mechanics and challenging adventures strike a balance that will make this game appealing to both the hardcore D&D fans and the complete novices alike.

Having played the Castle Ravenloft board game, I knew what I was getting myself into with the Legend of Drizzt, and I can say that I still had a lot of fun and found the improvements refreshing.

As I was only vaguely aware of the Legend of Drizzt novels, I’ve listened to the feedback of my friends who thought the game really did a good job of representing the characters and the setting.

We haven’t combined the games in the series yet to see how that works, but we expect it to be a lot of fun. While I’ve had the luck not to encounter it, some players reported that the figurines may arrive with bent pieces.

This happens because figurines are thematically packed into plastic bags. I am surprised they haven’t fixed this issue yet by just adding some styrofoam pellets or packing peanuts into the bags to keep the figures protected.

All things considered, Legend of Drizzt shows a definite improvement over the prior D&D board games, and is quite a lot of fun, especially when all of the players get enough experience for the competitive mode.

We hope you enjoyed our Legend of Drizzt review. We’d love to hear your thoughts on the game or board games in general. Drop a comment below!

Find more Dungeons & Dragons Board Games in our video below: