Everyone likes a bit of schadenfreude, right? Well if so, you’re going to love Gloom. Let’s jump right into our ultimate Gloom review!

Gloom is a card game for two-to-five players in which your job is to make your family of five have the most miserable time possible. Using some cool translucent cards, you dish out misfortune on your characters, while trying to make your opponents’ characters have a good time.

The crux of the fun comes in the story-telling, though. Each card you play comes with a short description of what caused its effect. It’s then up to the players to tell the story around it.

Once someone’s family has all met an ‘Untimely Death’, the game ends and the self-worth of each family is tallied up. The family with the lowest self-worth wins. Happy times.

Along with a general sense of foreboding, inside the Gloom card game box you’ll find:

One of the best things about Gloom is its intuitive translucent modifier cards. They’re designed to be added on top of character cards to adjust their points value or apply special effects. Produced to a really high standard, you won’t have any trouble reading text on the lower cards or getting to enjoy the illustrations.

Speaking of the illustrations, these gothic horror characters add a great deal to the experience of the game. Taking clear inspiration from the likes of Edgar Allen Poe, H.P. Lovecraft, and The Addams Family, the detail of each individual spurs players’ creativity as they devise plots throughout the game.

The text, too, complements the theme and tone of the game especially well. The different prompts on the cards could have been taken from a Mary Shelley novel. While the comedic and tongue-in-cheek rulebook sets the scene nicely.

Gloom comes in a really compact box that makes it a great on-the-go option. It has easily worked its way onto my list of potential games for taking away with me while traveling.

How to Play Gloom

First off, each player should pick a family and take the five respective character cards for that family. You can choose from Castle Slogar, Hemlock Hall, Blackwater Watch, or Dark’s Den of Deformity. Your family cards should be placed face-up in front of you.

Then, shuffle the modifier, event, and untimely death cards together and deal five to each player. The remaining cards form the draw pile.

At some point, you could play an Untimely Death card to kill a character in your family or your opponents’. This takes the character out of the game, locking in the self-worth points they have gathered so far. You can only do this to a character if they have negative self-worth.

Once all characters from one family have died, the game ends and all players tally up their self-worth points. Whoever has the most, wins! (And should probably seek counseling.)

The official rules state that whoever in your group has had the worst day gets to go first. It’s up to you to battle out whose constitutes the worst. On your turn (which, for your sake, I hope isn’t first), you get to take two actions. Each action can be one of the following:

These transparent cards can be played on top of any living character, including your opponents’. They can increase or decrease a character’s self-worth and/or cause other types of special effects. For example, it could reduce or increase a player’s draw limit, or it could even interact with other cards.

Interestingly, there are only three slots for self-worth points on modifier cards. The result is that some cards might override a previous card’s effects.

Events cards are single-use, one-off special effects cards that are discarded after use. It could say, bring a character back to life, or cancel the effects of another card.

This is how you kill a character – either your own or an opponent’s. To do so, the character must have negative self-worth. This takes the character and their self-worth points out of the game, ready to be tallied at the end.

Note, Untimely Death cards can only be played as your first action each turn.

When all the members of one family are killed, the game ends. Each player tallies up the points for their dead characters (not any that are still living). Whoever’s family members died with the lowest total self-worth wins the game.

Hang on, though. There’s still one bit you’re missing! A key element of Gloom is the story-telling. Each card you play will have a short description to explain why that effect is happening. For example, you might get negative self-worth because you ‘broke many bones’, or were ‘menaced by mice’. Or, say, your character could die because they were ‘slain by an heir’.

It’s your job, as you play the card, to make up the bleak and/or gory details.

Your First Game of Gloom

If playing with a group of four players, you’re advised to all cull one member of your family before starting to keep the game to an enjoyable length. This isn’t mandatory, but, especially if you have some real storytellers among you, is recommended.

Also, you have to do this if you want to play with five people. In this instance, you must use the culled cards to form the fifth family.

In terms of gameplay, you might notice that self-worth modifiers in the bottom slot are much less common than those in the top slot. This makes those with modifiers in the lowest slot much more valuable, as they’re harder to find and even harder to override. So keep your eyes peeled for those rare ones!

There is a whole load of expansions for Gloom, depending on what kind of hardship and torment you want your family to have.

You could introduce some new families to the game, such as the Le Canard Noir (Gloom: Unhappy Homes), whose creative endeavors always end in disaster, or the malodorous Malone mob (Gloom: Unwelcome Guests). Both of these expansions come with 55 additional modifier cards. 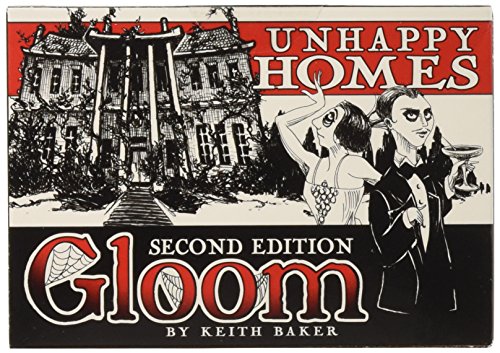 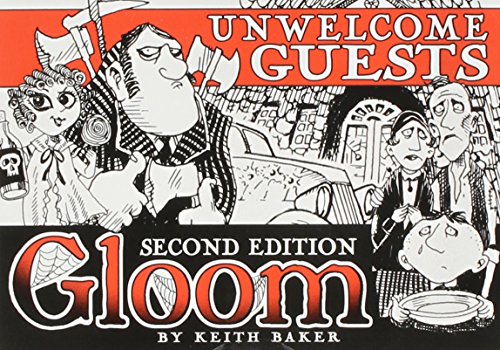 Or you could spice up the gameplay with new mechanics like Stories, Undead, and Timing Symbols with the Gloom: Unquiet Dead expansion. 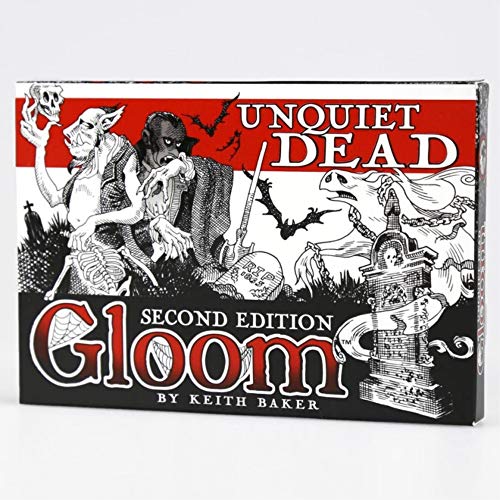 Also, Lovecraft fans will no doubt enjoy Cthulhu Gloom, in which your families are at risk of going insane, too. 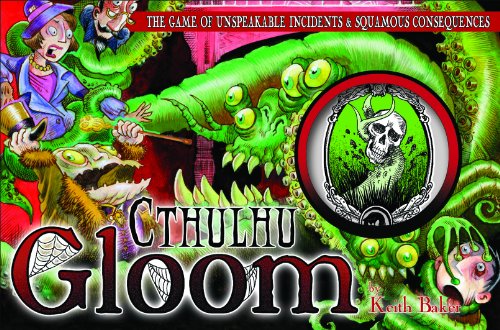 Ironically, you’ll have a lot of fun playing Gloom. And you don’t have to be a sadist to do so. I laugh so much when playing this game.

That’s thanks to the brilliant story-telling side of Gloom. Its vague yet also very specific prompts lead players into some very twisted parts of their imagination. Can you possibly connect the dots between how Mister Giggles went from being ‘wondrously well wed’ to then dying by ‘choking on a bone’? Sure you can.

It works well because players can be as in-depth with their stories as they like. You can create full backstories for each character as one card is laid upon another. Or, if not that way inclined, just stick with one quick sentence.

Of course, you can play without any story-telling at all, but I strongly encourage players to give it a go.

I especially enjoyed the level of interaction in Gloom. You’re building these stories together as a group and it can create quite the sense of one-upmanship as you try to weave weirder stories for each character than other players. The gameplay, too, is fantastically interactive. This isn’t just card-crafting: you are actively undermining your opponents by crafting theirs, too. Made all the sweeter when you give a full backstory to how that card came to be.

Gloom sits in that nice category of games that are very easy to learn, but that still requires some real strategic thinking. You’ll learn the rules in a matter of minutes. But there’s much more going on than meets the eye. The rarity of the different modifier locations; the play-off between a card’s self-worth modifier and special effect; the push-your-luck element of when to cash out with one of your characters… it’ll take some brainpower to get it right.

I also want to give Gloom a shout-out as a great option for travel. Its compact box and simple set-up make it perfect for carrying around. The length of the game (about an hour) might make it a bit difficult to whip out for a quick session on-the-fly, but for a cozy night in or long train journey, it’s perfect.

Finally, despite being easy to learn, I’d note that Gloom definitely isn’t one for the kids. Some of the cards’ prompts err slightly too far up the morbid scale for young minds. But this just makes the stakes all the higher for the intended adult audience.

Gloom is a card game for 2-5 players in which your job is to inflict so much misery on your family that they all die – and the more miserable they are the better.

With simple but still challenging mechanics and a great translucent card device, it’s a fun and strategic game with top-notch player interaction.

The real joy, though (that’s right, joy), comes from the story-telling you get to do to describe how your characters each found themselves in their unfortunate situation. It’s hilarious and a real workout for the imagination.

Gloom is a super-fun, imagination-driven card game that brilliantly intertwines some great mechanics with a player-led storytelling device. The flow of the gameplay is fantastic as you craft your character cards and spite your opponents, while at the same time weave elaborate, often raucous, backstories about your hapless family’s miserable downfall.

If your group isn’t that into the story-telling element, then there’s still a solid game here. The translucent cards, especially, are particularly well made. And there’s a good level of strategy to keep you coming back for more. But it really is when you let your creativity run wild that Gloom comes into its devastating own.

On the flip side, you are probably going to learn about some deep dark places of your friends’ minds that you may wish you left undisturbed…

Have you tried Gloom? We’d love to hear your bleak and dismal thoughts on this card game. Drop a comment below!