A Game of Thrones: The Board Game is a quiet little game in which players act out a peaceful and democratic transition of power from one elected official to another.

Ok, maybe that’s not quite true. Rather, this is a blood-thirsty power struggle that might even leave Brienne of Tarth feeling a little queasy. Like this game? Why not check out our list of the Best Game of Thrones games.

Brief Overview of A Game of Thrones: The Board Game

Today we’re looking at the second edition of A Game of Thrones: The Board Game. It’s an area control game for three-to-six players based on the A Song of Ice & Fire fantasy novels by George R.R. Martin (the board game came out before the TV show, ok?).

Taking leadership of one of six main Westeros Houses, your aim is to control the most number of castles and strongholds at the end of the tenth round.

Alongside mustering armies and conquering lands, diplomacy and alliances with your opponents are going to be vital as you vie to take the Iron Throne. Adhering to those alliances, though, is optional.

Unboxing A Game of Thrones: The Board Game

Opening up A Game of Thrones: The Board Game you’ll find:

The first thing it’s worth mentioning is that, being released before the TV show, there’s absolutely no reference to it. That’s right, not a single sign of Kit Harington or Emilia Clarke!

Despite this, though, within the artwork and design, nothing will come as a surprise. The map of Westeros that acts as the board could fit neatly into the now legendary opening credits. It really hit home how closely the TV show producers kept to the books in some areas of the look and feel.

In terms of the components, this is a game with a lot of fiddly pieces. Over 260 cardboard tokens and nearly 140 plastic units. They’re all nicely produced in the House colors.

Finally, you’ll also get six player screens. They’re perfectly adequate, if not a little small. But useful for calculating your devious plans in private as you plot to take the Iron Throne!

How to Play A Game of Thrones: The Board Game

To start, each player chooses a House they want to represent in the game (Stark, Lannister, Greyjoy, Tyrell, Baratheon, or Martell). These all have different strengths and benefits.

Then, take all the relevant cards and tokens for that house, including a player screen, and put your Victory, Supply, and Influence tokens on their relevant tracks. Where you place your tokens depend on the House you chose to play. Whoever is the furthest down the track instantly takes the dominance token for that track. Also, disperse your units on the game board as instructed on the player screen.

Next, set-up the Westeros decks I, II, and III next to the board. Finally, all players should take five power tokens matching their House from the power pool.

A Game of Thrones: The Board Game has ten rounds, each made up of three phases. Players must vie to control the most areas containing a castle or stronghold by the end of the 10th round. Should any player control seven such areas at any point in the game, they immediately win.

1) Westeros phase – draw one card from each of the three Westeros decks and resolve them. These represent events that could happen in Westeros. For example, a Wildling attack could occur. Or other changes to the circumstances.

Examples could be a supply card, which lets players move up the supply track by the number of supply icons they control. Or a mustering card, where players generate more units depending upon how many castles or strongholds they control.

2) Planning phase – players secretly dish out orders to their units on the board using facedown tokens that will be resolved in the action round. They cannot show what they have put down, but can talk to other players and form alliances or plans – whether or not what they said is the truth is another matter!

The orders you can select to use are:

There are also special orders that let you do things such as mustering new units. You’re limited in the number of these you can do.

Once all orders have been assigned, they are locked in and revealed.

All orders are resolved in turn order, following this process:

When a player marches into an area with opposing players they must resolve combat. This takes place by comparing each side’s total combat strength, calculated by totaling up:

Each battle also involves playing a House Card, representing Houses that can grant you their support, and give various bonuses.

If the defender loses, their units take casualties and retreat, with the attacker taking control of the area.

Players continue round through round, battling amongst each other, forming (and breaking) alliances, and expanding (or losing) ground. Should a player control seven areas with castles or strongholds at any time, they win! If it reaches the end of round ten, the player with the most castles or strongholds wins.

Your First Game of A Game of Thrones: The Board Game

There are several mechanics in the game that I’ve not mentioned yet, so I wanted to detail two I especially liked that didn’t quite make the cut of the ‘How to play’ section.

Napoleon said that an army marches on its stomach. And it’s no different in Westeros. The maximum size and formation of your army are dictated by your position on the Supply Track.

Each level on the supply track has a corresponding number of armies and a maximum number of units allowed in each army. Should you have to reduce your position on the Supply Track at any point, you might have to destroy some units to meet the required amounts.

You gain more units, on the other hand, when a mustering Westeros Card appears or when using a special order. For each stronghold or castle in your controlled area, you gain units.

A nice addition in the game is the three influence tracks and dominance tokens. Whoever tops each track gets the relevant dominance token, granting them some special privileges. They are:

The Clash of Kings Westeros Card puts a spanner in works, removing all players’ tokens from the tracks and starting a bidding war for where they get put back.

There are three available expansions for the A Game of Thrones: The Board Game’s second edition:

This expansion adds two new Houses into the mix – the Targaryens and Arryns – meaning up to eight players can now play. It comes with an additional game board to represent Essos, and the ability to seek a loan from the Iron Bank. Although this will always have to be paid back with interest. 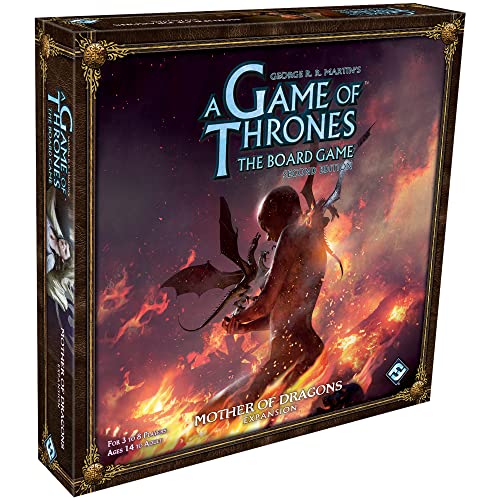 A Feast for Crows

A Feast For Crows is a four-player expansion scenario. Instead of competing for strongholds, you are given specific objectives to achieve. This can dramatically reduce the play time if you fancy a slightly quicker game.

A Dance with Dragons

Another scenario expansion, A Dance with Dragons picks up the story of the fifth book. Stannis Baratheon holds The Wall. House Bolton controls Winterfell. And the Lannisters have taken King’s Landing.

It’s the players’ job to determine how things pan out.

From above, A Game of Thrones: The Board Game might look a lot like Risk. It is an area control game, after all. However, there’s far more to it than meets the eye.

You can’t win this game simply by building a massive army. In fact, the supply track actively prevents players from doing that. Instead, winning A Game of Thrones: The Board Game will rely heavily on negotiation, diplomacy, plotting, and (if you really must) betrayal.

And this is what makes the game so special. Many other area control games have an element of trade or negotiation, but in few do they have such a hold on the entire game.

Fair enough, you probably won’t spend the entire game backstabbing your friends. But simply the fact that they could add such tension into the room. And besides, this is the Game of Thrones, you can hardly hold it against them afterward when they do.

Beyond that, though, A Game of Thrones: The Board Game is still a command-and-conquer experience at heart. For me, this still puts it firmly next to Risk in terms of its general militaristic feel and area control winning conditions. For this reason, those that prefer bringing in elements of agriculture, technology, and culture, rather than all-out invasion, are probably better off sticking with the likes of Sid Meier’s Civilization.

No Need to Sacrifice to the RNG Gods

But this comparison shouldn’t put off the Risk-naysayers. Along with diplomacy and political maneuvering, the nature of combat is very different, too. Notably, A Game of Thrones: The Board Game doesn’t rely on dice rolls or other random elements to settle the combat. This keeps the game nicely focused on the strategy, negotiation, and alliance elements in order to win battles against the odds.

It all boils down to a fantastic Game of Thrones experience. The board game was released before the TV show even hit the screen, but it’s so well produced that they fit together seamlessly. It is brilliantly portrayed in terms of artwork – I love the map of Westeros, for example.

While the wheeling, dealing, backstabbing, and relationship-management aspect of the gameplay will have you watching over your shoulder for a Faceless Man ready to slit your throat in no time.

A Game of Thrones: The Board Game (TL;DR)

A Game of Thrones: The Board Game is an area control game for three to six players. While it may look a lot like a shiny version of Risk, it sheds the dice rolling element and replaces it with a bucket-load of deviousness instead.

Your aim is to control the most castles and strongholds in Westeros. Alongside mustering armies and battling their opponents for dominance, players will form alliances with each other – and no doubt break them – as they seek to control the Iron Throne.

It’s incredibly tense – and has no doubt ruined countless friendships over the years – but it’s totally worth it.

A Game of Thrones: The Board Game is a great mix of things that happen on and off the board.

However, it’s the stuff that happens off the tabletop that really matters. And it’s this that will be the source of many bitter stories among your friends for years to come – whether or not they’re fans of the books or TV show.

It’s exciting. It’s tense. And sometimes it can be downright nasty. But it’s just so fun.

All the while, miles away, hundreds of people brutally cut each other down on the battlefield in your name. Cersei Lannister summed it up quite succinctly: “When you play A Game of Thrones: The Board Game, you win or you die.”

Have you tried A Game of Thrones: The Board Game? We’d love to hear your thoughts on our review. Drop a comment below!

Find more Strategy Games in our video below: