Enter the world of the Arabian Nights. The sultan has died. And now you must jostle for influence to take their place. Check out our full Five Tribes Board Game Review below. 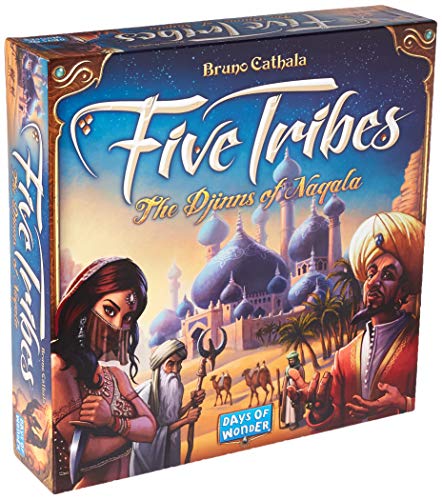 Five Tribes is a strategic worker placement game for two-to-four players, based on the age-old, classic mancala system. But don’t let the simplicity fool you, this game comes packed with a lot of strategy.

Skillfully moving your Meeples around the 5×6 grid, your aim is to build up the most Victory Points to become the next sultan. To do so, you’ll need to claim tiles with your camels, build palaces and invoke Djinn abilities, among many other things, before the time runs out.

Five Tribes: The Artisans of Naqala

Adding a sixth tribe to the game, The Artisans of Naqala is the obvious expansion for those that have worn out the original Five Tribes from excessive play. The new tribe, the artisans, can produce special items that score you extra Victory Points or grant you special powers. 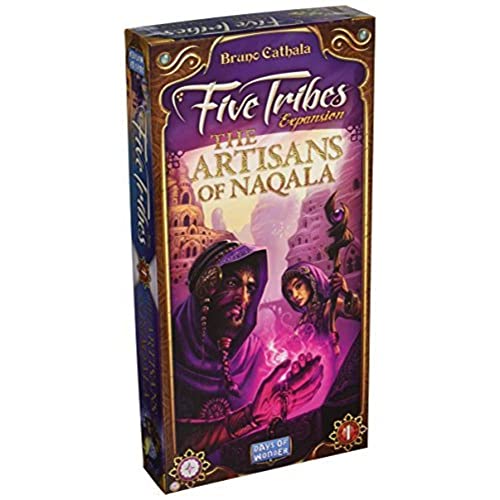 Five Tribes: The Artisans of Naqala Expansion
$29.99
Buy on Amazon

Five Tribes: Whims of the Sultan

This expansion makes it possible to play Five Tribes with five players. But that’s not all, it also introduces special tasks for players to complete in order to score extra Victory Points, and new types of city tiles. 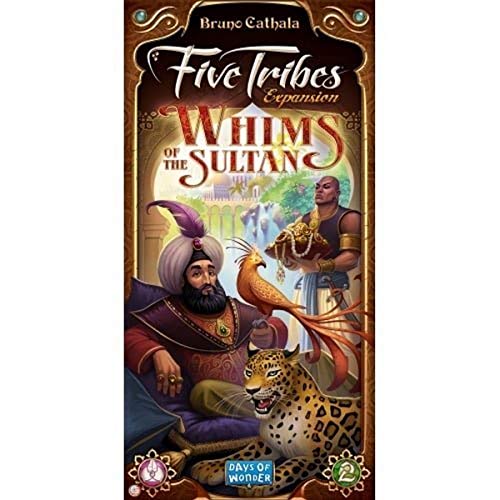 Give Five Tribes a careful rub and from within the box will emerge not a genie, but…

Five Tribes is a pretty straightforward game when it comes to components. It’s largely just cardboard tiles/tokens and Meeples. But these are both well-produced. In particular, I’m always a fan of wooden pieces over plastic. And thankfully, the five groups of Meeples are made of strong, wooden stuff. This sturdiness helps keep the Meeples upright throughout the game, which would otherwise be quite precarious on the many small, cardboard tiles that make up the play area.

The design and artwork fervently stamps the old Arabian theme throughout the game. It looks great, with beautiful imagery, nicely animated tiles and tokens, and decent print. The emphasis on design is perhaps due to the fact that the theme is quite weakly linked to the gameplay itself. But more on this later.

I especially like some of the extra touches Five Tribes comes with to make gameplay that bit smoother or just general storage. For one, each player is usefully provided with a comprehensive helpsheet, detailing turn order and what each tribe and tile type can do, which is a nice thought.

Also, the rulebook advises those unboxing the game for the first time to keep the punchcard frames and put them beneath the plastic insert to prevent pieces from spilling out of their holes while in storage. Neat.

How to Play Five Tribes

If playing with three of four players, takes eight camels and a turn marker each. In a two-player game, take 11 camels and two turn markers each, as you’ll take two turns on each go. Everybody also takes 50 gold coins, although keep them upturned so that the other players are never sure of how much you have.

Next, build the player board, known as the Sultanate, by randomly placing the tiles in a 5×6 grid. Then place three random Meeples on each one.

Finally,  place the turn markers on the Bid Order track at random, and lay out nine random Resource cards and three Djinn cards.

Aim of the game

The ultimate purpose of the game is to be the player with the most Victory Points when it ends. There are a number of ways to earn Victory Points, including collecting gold, owning Viziers and Elders (yellow and white Meeples, respectively) and Djinns, controlling certain tiles, among other things.

To begin, players choose – in order of the Bid Order track – where they want to be on the Turn Order track. You must pay gold to be on the higher spaces to try and secure an early turn.

The player at the top of the Turn Order track goes first. They should then follow all these steps in order before the next player takes their turn:

When moving your Meeples, make sure you follow these three rules:

In the Tribe Actions phase, you can collect Yellow Vizier Meeples, which can be cashed in at the end for Victory Points. So can White Elder Meeples, however, these can also be exchanged for Djinn Cards. Green Merchant Meeples, on the other hand, can be swapped for Resource Cards, while Blue Builder Meeples can be combined to get even more Victory Points.

Red Assasin Meeples are devious – they can kill other Meeples! Either remove a Meeple from a nearby tile or kill off your opponents’ white or yellow Meeples. If you kill off the last Meeple on a tile, then you can take control of that tile, too!

Players take turns trying to rack up as many Victory Points as possible ahead of scoring. They must be extra analytical as they look to win the high-point tiles and do what they can to stop their opponents from scoring.

Djinn cards are an especially powerful asset, as they are worth Victory Points in themselves and allow you to use special powers. You’ll also collect Resource Cards, which can be significant Victory Point winners.

Ending the game and scoring

The game ends when one player uses up all their camels or there are no remaining legal Meeple moves. Scoring then takes place.

Your First Game of Five Tribes

If choosing to bid zero on the Turn Order track, your natural inclination is to assume that if you bid zero first then you go ahead of those that bid zero after you. However, in order to discourage players from giving themselves a cushy spot on the Turn Order track without spending any cash, that’s not the case. Instead, those that subsequently bid zero will go ahead of you. For example, if you are the second of two players to bid zero, then you go ahead on the turn order track.

Also, don’t make the mistake of thinking that you can end your turn on an empty tile. If it’s empty, then there isn’t a Meeple that matches the color of the Meeples you’re moving. So, it would be an invalid move.

Lastly, note that once ownership of a tile has been won, it cannot be transferred. So, even if you end your turn in a tile with only one Meeple, should it already belong to someone else you cannot place your camel on that tile.

For a game that relies on such simple mechanics – the basics behind the Meeple movement barely deviate at all from classic mancala – Five Tribes will surprise you with how much thought can go into it. Surveying the board, you’ll realize each turn there are thousands of potential moves you could make. It takes a keen eye sometimes to spot the best ones.

Strategy fans, in particular, will have a lot to keep them busy. I love how you can intricately plan out your movements several turns in advance to build up to a killer turn. The blue Builder Meeples, for example, can end up really cashing in if played effectively.

Then, at the same time, you have to pay close attention to your opponent and, if possible, can muck up their plans with the simple placement of a Meeple. (Or, at the very least, stay on your toes to avoid accidentally leaving a gateway for them to cash in big-time).

And this is what I think makes Five Tribes so impressive. If you’re new to mancala games or a younger player, the simplicity of the base mechanics mean you’ll have no problem quickly picking up the game and being competitive (especially as they provide an overview sheet of the basic rules for each player). But on the other hand, seasoned veterans of the game can still have endless fun working out the best strategy to rack up points.

What’s more, it’s great to play, play and play again. There are many ways to earn Victory Points meaning you can try multiple different strategies. And, with the tiles laid out randomly each game, it mixes things up nicely to keep it fresh.

Another massive bonus of Five Tribes is that it works just as well with two players as with three or four. There’s a couple of differences to the gameplay – such as getting two turns each round – however, if anything these open up new possibilities and improve the overall experience.

I am a little torn about the theme, though. I think it looks great and it’s a style that I really enjoy. But the mechanics, such as the Meeple placement, link only loosely to it, if at all. In particular, the five different tribes themselves – which the game is, of course, named after – have no real role. Yes, they’re apparently represented by the Meeples. But the movement of them around the board is hardly reflective of the theme. Not to mention, are you really likely to have a tribe of just viziers or elders? I don’t quite buy it.

This doesn’t take away from the gameplay, however!

Five Tribes is a fantastic mancala-style/worker placement game. With straightforward rules, it’s easy for anyone to pick up quickly, making it perfect for a group of mixed ability. However, there are also endless amounts of strategy that can be employed to notch up those sought-after Victory Points.

So, don’t get fooled. This may be easy to learn. But it can be very hard to win!

Five Tribes ticks so many boxes for me. It’s an immensely brainteasing strategy game. With its thousands of potential movements and different routes to pick up Victory Points, it will leave strategy lovers salivating just from the thought of it.

But, at the same time, it will take those new to the game only a few minutes to get up to speed. For me, it makes it the perfect back-up game, ready to be deployed in any scenario. Whether you need to entertain the nephew and niece or get the competitive juices flowing with your board gaming mates, it’ll do the job.

The bonus points, though, come from its adeptness as a two-player strategy game. Living in an apartment of two, I have a real soft spot for games that play as well with two as they do with groups. Five Tribes blows this out of the water as, in many ways, with two it’s even better.

Have you tried Five Tribes? We’d love to hear your thoughts on this classic game. Drop a comment below and let us know!

Find more board games to play below:

How To Win Ticket To Ride