A quick, fast-paced, thrilling game is all you need on a game night with your friends and family. A game with various difficulty levels so that you can start easy and add in more complexity as everyone gets more comfortable. The good news is, we’ve found just such a game, Escape: The Curse Of The Temple! Trust us, there is no going back once you have played it.

An ambitious, exciting, and quick game played in real-time! Read on to check out our comprehensive review of the game Escape: The Curse Of The Temple.

Brief Overview Of Escape: The Curse Of The Temple

Escape: The Curse Of The Temple is a cooperative game played with 1–5 players (The best is 4 players). The mission is to return the cursed gems to the temple and escape before it collapses on you. And remember, ALL of you need to escape the temple within 10 minutes. If even a single adventurer cannot escape, you all lose; for now, you all have to live with the guilt for the rest of your natural lives.

Among the many factors that make this board game a must-try, the first is that you do not play it in turns, but as fast as possible. All the players play it simultaneously with their own set of dice. But while playing your own game, you will need to ask for or help your fellow adventurers to accomplish the mission.

Unboxing Escape: The Curse Of The Temple

Unboxing the game was super fun. The artwork really reminded me of the Indiana Jones movies.

Inside the box, you’ll find several punch cards to punch out the tiles, curse cards, and advanced tiles you’ll use in the game. The punch cards were thick and sturdy and the tiles and cards came out effortlessly. All in all, the packaging was not only excellent but intelligent.

Next, you’ll swim through an ocean of dice. Yes, five dice for each player. (Okay, maybe not an ocean…)

Don’t forget the adventurers! The little wooden meeples, who will race through the tiles trying to escape. These characters are 3-D, carved out of wood, and look fantastic.

The whole package looks great: sturdy, beautiful, and interesting too.

But hang on! There’s one more thing in the box. It’s is the CD of the game theme. It is a 10-minute soundtrack that also pops up warnings as the timer nears the deadline. The theme soundtrack is what makes the game panic-inducing, thrilling, and so very exciting.

How To Play Escape: The Curse Of The Temple

So, finally, here’s how to get started!

Return as many gems as possible to the temple and escape before the 10-minute soundtrack is over. If you fail in your mission, you will be trapped in the temple forever. Yeah, unlucky you.

Each player has five dice, and each die has five symbols. They are as described below:

You set aside the cursed gems on a tile called the gem depot.

Now, lay the starting tile and one tile to each of its sides. This starting tile is where all of you will start your adventure. Each tile is a room with several doorways. You would need to roll dice to enter a room or add a room from the stack of tiles.

But how exactly would that happen?

Each tile has a couple of symbols marked in the corner of the tile. You need to roll your dice and match these symbols to move forward from that room. Now re-roll these two dice as soon as you have moved forward.

Next, to add a room and explore the temple, pick up the next tile from the stack and try to match that tile’s symbols on the corner. Once you get them, re-roll the two dice.

Similarly, you need to keep re-rolling dice and match symbols on the back of the tile to keep moving forward.

Now, in some of the rooms, you would find more symbols that let you return a gem to the temple. Roll the dice to get those symbols and move the gems from the gem depot to the temple room. You can ask your friends to join you in the room and help match the symbols.

Pro Tip: The more gems you return to the temple, the faster you escape.

You need to find the exit tile and escape by rolling the blue keys to the exact number of gems left in the gem depot.

But did you forget that 10-minute soundtrack? Yeah, you need to accomplish all this within 10 minutes, or sorry, all of you lose.

As I mentioned, this is a cooperative game. There are several moments during the game when you help your friend recover from a fix, and these moments make you feel elated. Don’t waste time with high-fives, you are in a rush! Say, for example, all the five dice of another player show a cursed mask, and your friend is trapped! You rush through the board to help them by rolling a few golden masks. These and many other moments in the game build on camaraderie.

The game’s fast pace also excludes the option of the alpha gamer problem, which is an issue with so many cooperative games. You just do not have time to dictate!

And when you get comfortable with the basic game, move on to the more advanced gameplay options. However, if you play too many times in a row, it can get predictable. The game, even with its so quirky advanced gameplays, lacks depth. So, if you are searching for a game with deep logic, then this game might not impress you. However, the fast pace, thrill, and lack of depth may make it suitable for a family game night.

In a nutshell, it depends on the people you want to play the game with. If you are going to play with your family or just need some fun without too much head-scratching, you must give this a try.

Also, some people might find the game too fast and chaotic. But mostly, everyone gets the hang of it after a few practice games.

We hope you enjoyed our review of Escape: The Curse Of The Temple, a great family game. It gets people of all ages playing together and helping each other to accomplish the mission.

The game takes just 10 minutes, so it acts like a great filler game between more intense sessions. Plus, anytime you feel bored, if you work from home, just take a 15 minutes break and play one round.

And if you love this game, go on and check out the Queenie Box that includes 6 new expansions and modules to continue your adventures! 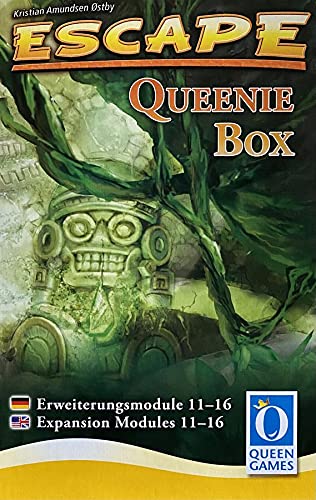 What did you think about Escape? Drop a comment below and let us know!