The sixth in the Dungeons & Dragons Adventure System series, Waterdeep: Dungeon of the Mad Mage introduces a new band of scrappy heroes to the fray. This time they’ll be exploring the Undermountain – an ancient dwelling, now home to the Mad Mage, Halaster Blackcloak.

Crawling with monsters, swamped with deadly traps, and teeming with loot, your heroes must fight, magic, and think their way to victory. Check the full Dungeon of the Mad Mage review below. 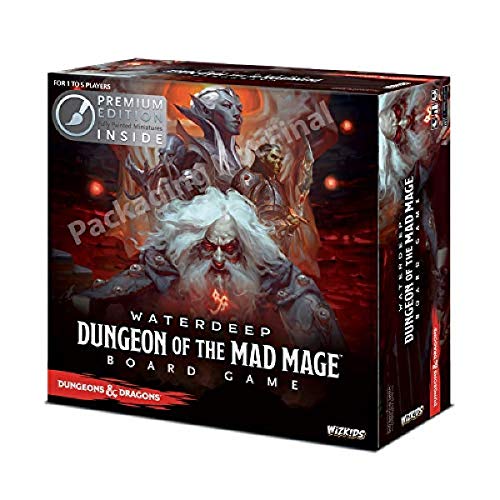 Brief Overview of Dungeon of the Mad Mage

Fans of the D&D Adventure System series will be pleased to know that Dungeon of the Mad Mage doesn’t stray away from the cooperative dungeon crawler-style gameplay of its popular predecessors. Sharing its name with an adventure module from the fifth edition of the role-playing version, there are some great new heroes to play and some even trickier monsters to conquer, including even a sentient, flying sword.

Players take their turns moving through the dungeon towards their objective, attacking monsters, discovering loot, and dealing with traps along the way. With multiple adventures to choose from and the random build of the dungeon, there are so many possible variations that it won’t get repetitive.

You don’t need to have played or owned the previous five games to enjoy this one, however, it can be nicely integrated with the others to mix things up and create even more dungeon-based mayhem.

Unboxing Dungeon of the Mad Mage

Opening it up, you’ll see there’s a tonne of stuff in this box. The game may seem a bit pricey at first look, but you certainly get a lot for your money. Your game should include:

Of course, the first thing you’ll do is take out the miniatures. These, as with the rest of the series, are very well made. When buying, you’ll have the option of purchasing either the standard or premium version, with the only difference being that the premium miniatures are painted for you.

My favorites have to be the beholder zombie twins (if they’re not twins then they must at least be related). They’re intricately crafted and look plain awesome. The huge Scaladar is also a stand-out of the crowd.

When it comes to the cardboard pieces, your ability to keep things neat and organized mid-game is going to be tested. There’s a barrage of tiles, cards, and tokens to pop out. D&D Adventure Series regulars will notice a few new features, too, such as tokens for bumping your hero up to levels three and four, and a new condition: ‘weakened’.

I would like to give a shout-out in particular to the quality of the tiles. Unlike with some of the other games in the Adventure Series (looking at you Ashardalon), the dungeon tiles are beautifully illustrated and make for an exciting board. They also feel even thicker than previous installments, not that I thought this was an issue before.

There have also been new cards added into the game, which we’ll find out about later. But rest assured, there are a lot of them. And, lastly, you’ll also find an Adventure Book, which is impressively clear and well laid out, along with a rules book and a sheet telling you who each of the monsters is.

How to Play Dungeon of the Mad Mage

Dungeon of the Mad Mage has 13 adventures to choose from and can be played with anywhere between one and five players. The adventures can be played individually but the game was built to be played as a campaign with you running through one adventure to the next.

To set up, separate out The Starting Deck and The Advanced Deck. I recommend putting aside The Advanced Deck for at least your first game. When setting up your game, make sure you carefully follow the setup for your specific adventure. In particular, the dungeon tiles. These often have specific instructions for how they should be shuffled to make sure you have an enjoyable game.

Then, you get to choose and kit out your Hero. You can be the gnome rogue Trosper, the human sorcerer Marcon, the human paladin Nayeli Goldflower, the half-elf cleric Cormac, or the tiefling fighter Atka. Each player chooses one character and then selects their Power Cards to determine their special abilities for the game.

Most adventures start with all players entering through the Yawning Portal and beginning on any square they choose on the Entry Well tile.

Your turn is split into three phases:

Encounter cards are unforeseen events or situations that you’re going to have to deal with before you can do anything else. Disappointingly, they’re rarely a surprise birthday party for your hero thrown by your fellow adventurers.

Once this has been dealt with, the Villains and the Monsters take their turns. Each one will list its actions on its card, which often differ depending on where your hero is.

Moving Through the Game

Play moves around the table from player to player, each one getting their chance to progress through the dungeon, discover enemies, spring traps, and find treasure. Eventually, depending on the adventure you picked, you’ll meet Villains and gradually progress towards your goal.

Notably, compared to the other games in the series, I felt like the cooperative element of the game was more important than ever. Each hero has their own special abilities and it’s vital that you work together to achieve your objective.

Your team wins if they reach the end goal of the chosen adventure. This could be anything from tackling Halaster Blackcloak himself to clearing out the bandit gang known as the Undertakers, who have taken up residence in the dungeon.

If one of your players loses all their HP and has no Healing Surges remaining, then sorry. It’s game over for everyone.

Your First Game of Dungeon of the Mad Mage

If you’re a seasoned Adventure System player, you’ll be able to pick up Dungeon of the Mad Mage very quickly. There are a couple of new quirks, such as the new condition (‘weakened’) and the ability to level up to level 4, but the basics all remain the same.

For beginners, there can be quite a lot to take in. However, the makers have made things a little easier by including a Sequence of Play card, which lays out how a turn should proceed, and also a suggestion of sensible Power Card choices for each player.

You should know, though, that sadly some of the cards do have misprints on them – a rare blip in quality control. Some of these are more impactful than others. For example, Macron’s Armor Class at level 1 should be 14, rather than 15. However, others are just a case of mixing up names (such as Inflict Wounds being wrongly printed as Cause Wounds). The gameplay isn’t seriously affected, but it’s worth making a note of these.

As with many games that allow you to choose a character, Dungeon of the Mad Mage’s Heroes aren’t all made equal. Macron, in particular, sits head and shoulders above the rest, in my opinion, and will probably quickly emerge as a favorite despite his low HP. He can use his Daily and Utility powers up to three times before they are flipped over and also has the ability to damage whole groups of enemies, making him especially useful.

Pros & Cons of Dungeon of the Mad Mage

Dungeon of the Mad Mage builds brilliantly on its already well-loved predecessors, introducing some impressive new features to the game. The Weakened condition is a real bummer to shake, while the Disadvantage tokens also present an interesting new challenge to the gameplay.

I also found the game to be a lot more violent. Ashardalon, for example, would introduce one or two monsters per tile. In this game, you could find yourself surrounded before you’d even had a chance to dust off your Mace of Disruption.

Another big change is the introduction of the Elder Ruine bane or boon cards. Quite how this plays out for you depends entirely on what you roll on the die. For example, the War card will mean that, for a roll between 1-10, every time you deal damage with a daily power, you can deal extra damage. Alternatively, if you roll 11-20, you will take one extra damage.

This new installment also rights one of the slight gripes I had with the previous games by allowing you Hero to progress up to level four, rather than just level two. It makes for extra character development, especially if you’re progressing through the Campaign mode.

It’s also a very adaptable game to the circumstances, allowing for either extended long-term gameplay in a Campaign, or for a quick-fire D&D hit by just playing one of the Adventures. Similarly, this is built to be played either as a solo mission or with a team of up to five is a big plus.

In the interests of balance, if there was one drawback (and I am grasping at straws here), it’s that the game has progressed so far that it is on the slightly more complex side for a total newbie to the Dungeons & Dragons/dungeon-crawler world. It’s absolutely not impossible to pick up, but it might just take a little more time to get your head around all the little quirks.

Lastly, I really do believe that Dungeon of the Mad Mage represents great value for money. There are a lot of components and the quality of miniatures and tiles is very high. Also, as mentioned before, the artwork on the tiles really jumps off the table and is a big improvement on some of the others in the series.

Dungeon of the Mad Mage builds brilliantly on its already well-loved predecessors, introducing some great new features to the game. Players take turns moving through the dungeon towards their objective, attacking monsters, discovering loot, and dealing with traps along the way. You don’t need to have played or owned the previous five games to enjoy this one, however, it can be nicely integrated with them to mix things up and create even more dungeon-based mayhem.

I found the variation of the adventures and the story created keeps things especially exciting, with what seems like an entirely new civilization of monsters and villains having formed in the Undermountain.

What’s more, the nature of the tiles means you’re going to come across these monsters even more frequently than ever before, so you’re bound to be in for a fast-moving and exciting game.

Dungeon of the Mad Mage is a bit of a step up from some of the others in terms of difficulty, which I really enjoyed as it emphasized more than ever the need for effective teamwork and communication.

In my opinion, it could be one of the best of the series so far.

Have you tried Dungeon of the Mad Mage? Let us know your thoughts in the comments below!

Ready to crawl through more dungeons? Check out our list of the best dungeon-crawler board games!
Can’t get enough of Dungeons & Dragons? We got you covered with the best D&D board games out there.

Best Lovecraftian and Cthulhu Board Games