It’s 90,000 BC. Earth is a green, prosperous place, teeming with life and activity (although you couldn’t find a Starbucks for love or money).

But all is not well. There’s cold on the horizon.

Dominant Species about the survival of the fittest. Mammals, reptiles, birds, amphibians, arachnids, and insects are all fighting for dominance in a world heading for the Ice Age. You better be ready to adapt, or face extinction.

Read the full Dominant Species Board Game Review below: 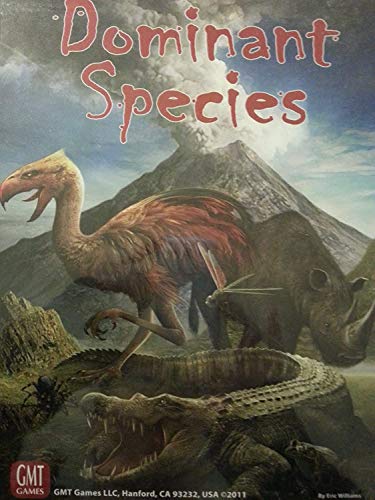 Dominant Species is a worker placement game where players take on the role of different animal classes. Your job is to expand and adapt to an evolving and ever-changing terrain to avoid elimination. The aim is to score Victory Points, which is done by becoming the most prominent and prosperous species as the world descends into the Ice Age.

The game takes place over the course of several phases. Players, in turn, choose how they want their species to adapt and manipulate the terrain to suit their needs. As time goes on, you can win Dominance Cards, which are seismic events that can be played in your favor.

Things can get very deep here, but it’s been masterfully put together into an intuitive and seamless gameplay experience.

There are no expansions to Dominant Species, however, a card game version of it was released.

Well, I say ‘version’, but it’s an entirely different kettle of fish to the board game. That’s not to say it’s bad, it’s just not got anywhere near the same charm as the original.

Players try to win each round by putting down cards from their hands with different elements on them. If, when everyone’s finished putting down, you have the highest amount of those elements, you win points.

There’s a number of complexities to the game that make it quite strategic. You don’t get dealt that many cards each round and, as the rounds progress, you get the chance to win more points. Therefore you’ll often find yourself having to decide between holding on to a big hitter for later, or cashing in.

It’s massively stripped back compared to the original, as you’d expect from a card game. It takes the theme and creates an entirely new concept. Sadly, it feels a little half-hearted. In particular, I was disappointed that you don’t play as one specific species. This is a big draw of the original, as you were battling for your own survival. Instead, it’s a point-scoring game with very little room for emotional engagement. 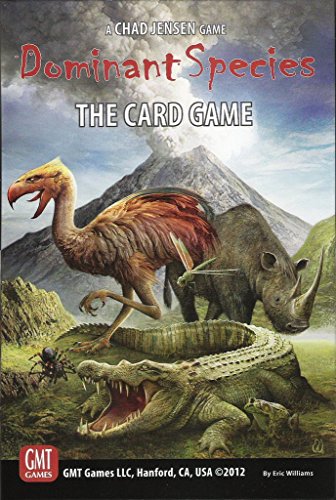 Dominant Species won’t top anyone’s ‘best components’ list, but that’s not what this game is about. Inside, you’ll find:

Depending on which edition you buy, the artwork differs quite a bit. The original came in for a bit of bashing due to its rather dull appearance. Future releases changed this, meaning the artwork is now much fuller and more colorful, so no complaints from me here.

As mentioned, there’s nothing crazy when it comes to components. The pieces are primarily wooden cubes and cones, which do the job. There are also lots of tile pieces for the board that are nice and thick. Throughout the game, I found the tesselation to be a little fiddly — even the slightest jiggle of the table can move a few things around — but that’s not a huge issue.

The tiles, which become Earth, are made up of larger sea, wetland, savannah, jungle, forest, desert and mountain tiles, and smaller tundra tiles.

How to Play Dominant Species

Dominant Species is a long game with a lot of moving parts and things to remember, however, it’s still relatively straightforward.

To begin, players choose which animal they want to be: Insects, Arachnids, Amphibians, Birds, Reptiles or Mammals. Taking your animal display, you’ll see that you have a special ability, along with a number of elements that your animal needs in order to thrive. Over the course of the game, you’ll be able to add (and take away) elements from your animal display.

Earth begins with six tiles, one for each type of terrain, and elements distributed as described in the rules.

All players also place a cube at zero on the Victory Point Track. The objective of the game is to be the player that’s scored the most points before the coming of the Ice Age. There are various ways to score points, which I’ll explain as I move through the rules.

There are three phases to each turn in Dominant Species. Each player takes part in a phase before moving onto the next one. These are:

This is the strategic part. All players take turns placing an Action Pawn onto available “eyeball” spaces on the action display. These eyeball spaces denote the actions you’ll be taking in the Execution phase, and only one pawn can be placed on each eyeball, so it’s first-come, first-serve.

Work your way through the Action Pawns in order (from top-to-bottom, left-to-right), resolving their actions and removing them as you go.

There are 12 different actions to be taken.

With a name that doesn’t quite convey the severity of its actions, this is when species are eliminated. If you have species on a tile that no longer match any of the elements (aka. Endangered) then they’re removed from the game.

There’s also a few other bits of admin to set up before moving into the next turn.

End of the Game

The game ends when a player selects the Ice Age card from the Dominance Card pack (it’s placed at the bottom of the pile at the beginning of the game). You do one more tally up of points, then, whoever is furthest down the Victory Point track wins!

Your First Game of Dominant Species

Confusingly, Dominant Species is a simple yet complex game. There’s a lot of different actions to remember and the likelihood is, on your first run-through, you won’t quite appreciate the effect of them all. After all, it’s hard to strategize when you don’t quite know what everything does. As such, your first game will likely be more of a try-it-out than a competition.

The manual is extremely well-written and clear, however, so it should only take one game to get everyone up to speed with how it works. Similarly, while there are a lot of different actions, the way they are carried out tends to follow the same process.

There are two things to bear in mind, though, which people often mix up. Firstly, the Dominance action is made up of two rounds of rewards. The Victory Points are awarded to whoever has the most species on that specific tile. The Dominance Card, on the other hand, is awarded to the Dominant species on the tile. These are not the same thing. You work out Dominance based on the quality of adaptation, not quantity. So even if there are more amphibian units on a tile than insect units, if insects match more of the elements, they will be dominant.

Secondly, pay close attention to the Dominance Cards upturned on the table. They are extremely powerful and could totally knock you out of the game if played by an opponent. So make sure you account for that in the Planning phase by either placing an Action Pawn on the Dominance eyeball straightaway or adapting your position elsewhere on the board.

This can often get overlooked by first-time players.

If you’re one of the many gamers that don’t buy into Risk because it relies so heavily on the luck of the roll, then you’re going to like Dominant Species. Firstly, there’s absolutely no dice. And beyond that, very little comes down to the luck of the draw with the cards or tokens. Yes, the Dominance Cards come out onto the board at random, but they’re there for everyone to see and plan for before the Planning phase even starts. Similarly with the element tokens.

This is a game all about planning and strategy. But that doesn’t make it slow-paced. Dominance Cards and other mechanics mean things can change very quickly, so your strategy will need to as well. If, like me, you live your life expecting the worst and contingency planning for it, you’ll likely do quite well. And nothing quite gets my contingency planning glandTM tingling more than preparing a strategy to avoid the extinction of my entire species!

I also loved the theme, which was a refreshing break from most other worker placement games that focus on industry or empire. There’s something extra special about playing for the survival of an entire species, and the way the game ebbs and flows impressively captures this with all its moving parts. And yet, despite the number of parts, the game impressively condenses them down into an incredibly straightforward system. It might take one run-through to properly get your head around, but it’s very intuitive.

The only drawback is that this game can end up taking a long time. You’ll likely find yourself around the table for up to four hours, perhaps even more if you have six players or it’s one of your first times playing. But of course, that’s not a big problem providing you know what you’re getting yourself into. Not to mention, the excitement of the game as it evolves is enough to keep anyone’s attention squarely focused on the task at hand.

Dominant Species is a worker placement game in which players take on the role of different animal classes, expanding and adapting to an ever-changing terrain.

This is a heavy game. But it’s engrossing from start to finish, with the status quo able to be turned entirely on its head within just moments. This doesn’t come at the expense of complex forward-planning and strategy, though. In fact, it’s vital. Which is one of the reasons I like this game so much. Its gameplay perfectly matches its theme: one of adaptation and ruthlessness.

Dominant Species is a fantastic worker placement game that puts you at the very center of the animal world’s battle for survival at the dawn of the Ice Age.

There’s no doubt that there’s a lot going on. But each mechanic is entirely necessary and straightforward and fits in seamlessly with the theme.

Dominant Species is engrossing from start to finish, with the status quo able to be turned entirely on its head within just moments. But that doesn’t throw forward-planning and strategy out of the window. In fact, it’s vital. Which is one of the reasons this game is so brilliant. Its gameplay perfectly matches its theme: one of adaptation and ruthlessness.

After all, nature is ruthless. Is it in your nature to be ruthless, too?

Have you tried Dominant Species? Drop a comment below, we’d love to hear your thoughts.