Deck-building games are some of my favorite types of board games. I love the variety of strategies and different paths that every player can take when using the same set of cards. There have been, however, a few games I’ve played where everyone has a similar deck by the end.

Since Dominion, there has been an entire host of new deck-building board games hitting the scene but they all have the basic premise.

The basic idea is to gradually add cards to your deck and create the ultimate deck to beat down your opponents. Each game takes a different strategy to accomplish this and due to the random nature of cards available, every player will come away with a different deck that’s optimized for a different purpose.

Deck-building is one of the most interesting mechanics I’ve seen in a long while and I’m very excited to get to talk about the DC Comics Deck-Building Game today. 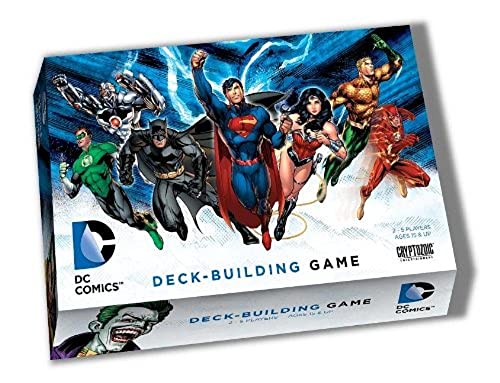 The Cerberus system uses a ruleset that was designed to be a blank slate for a deck-building card game. It’s easily customizable and can fit with most themes.

One of the best parts about the Cerberus system is how well it can mesh with any number of themes. DC Comics is an excellent choice because it can draw on years and years of comic book lore for characters and abilities.

At this point, most of your favorite characters can be accounted for in the various expansion packs, and all your favorites are likely going to be in the base set. 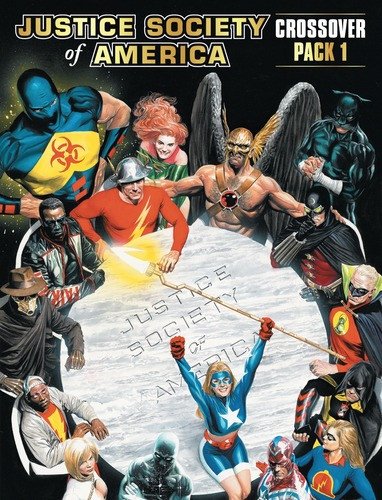 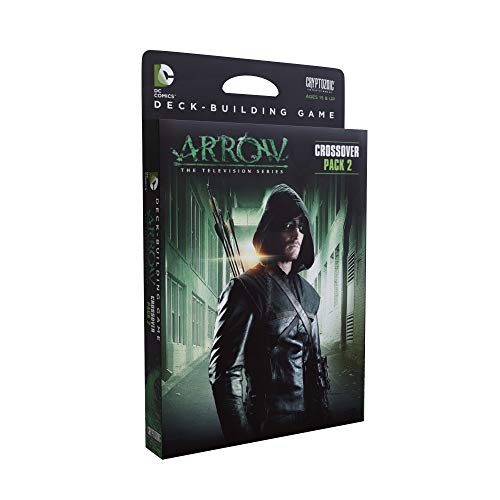 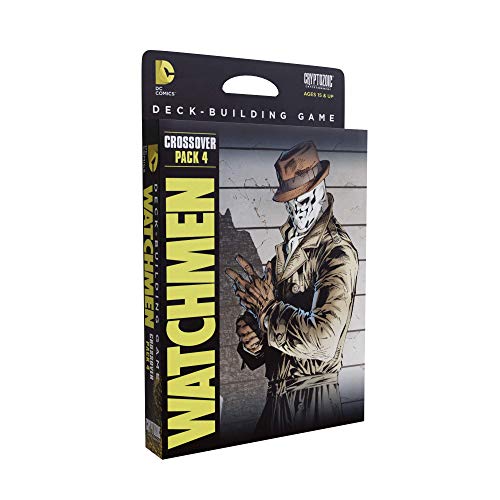 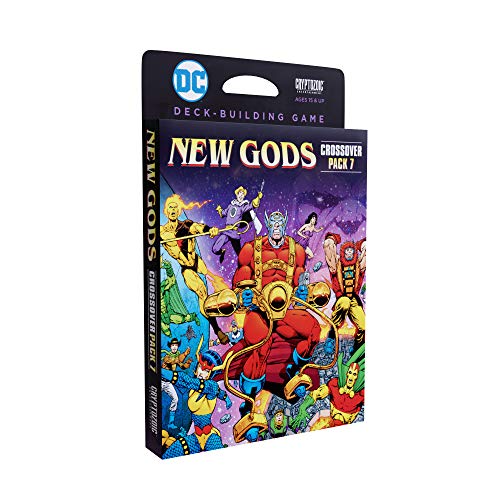 Each expansion adds more villains and new characters and abilities that can be mixed and matched so that you can set up your favorite showdowns. It’s sometimes fun to even try and set up your own battles that match your favorite comic book arc.

Heroes Unite is a Standalone/Expansion to the original DC Deck-Building Game. Think of it as an alternative starting point. You can get either one and still come away with a great game and if you like them both, you can mashup all of the cards and come away with a brutal showdown. 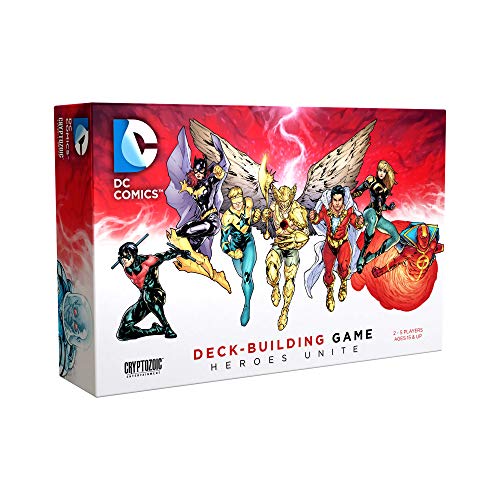 Here’s where you get to get cooperative. All hell is breaking loose and the DC universe is going to hell in a handbasket. Everything is harder in this one, which is why you get to work together with the other players to succeed. You still have to beat the supervillains but the added Crisis cards introduce terrible new events that may prove challenging for even the most seasoned heroes. There’s even an “impossible mode” if you happen to be a glutton for punishment. 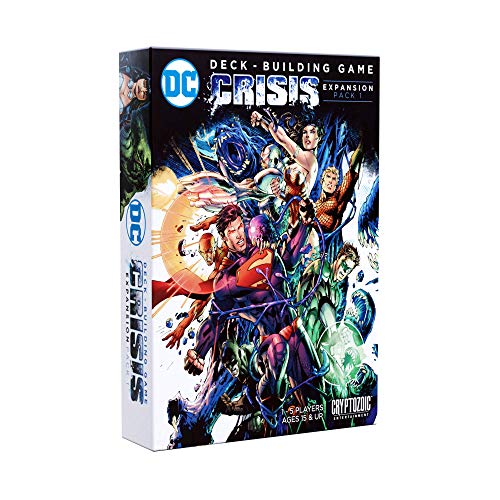 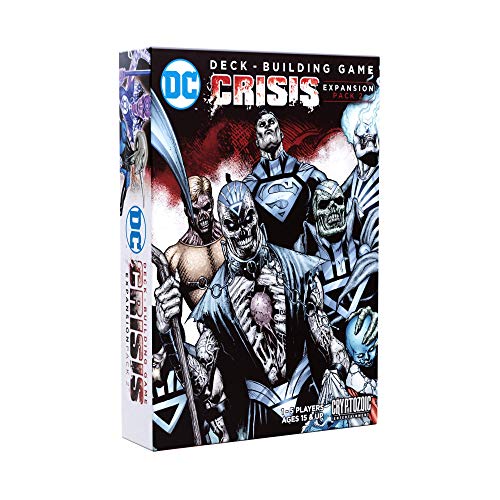 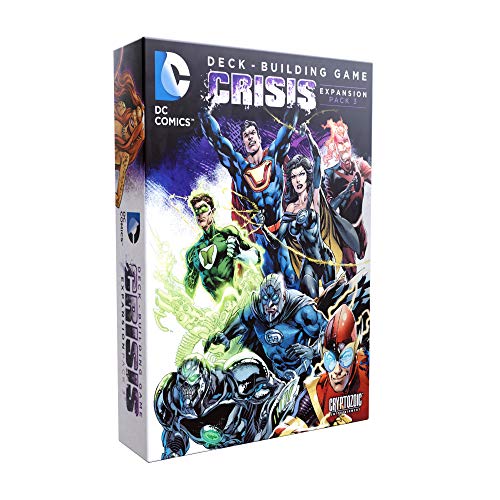 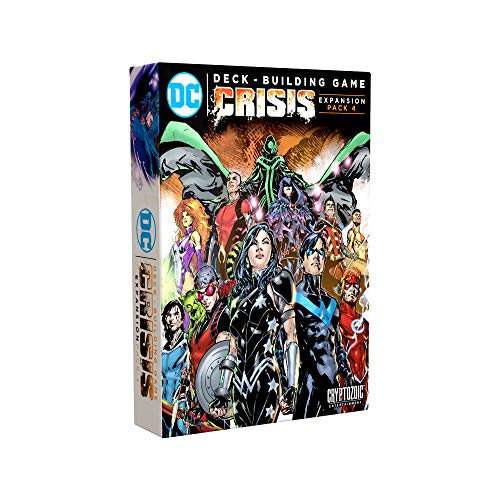 Who says the supes get to have all the fun?

Forever Evil allows players to play as the villains and beat down the superheroes. It’s another standalone/expansion game that can be mixed and matched or played on its own.

Seriously, who doesn’t like being a bad guy every now and then? 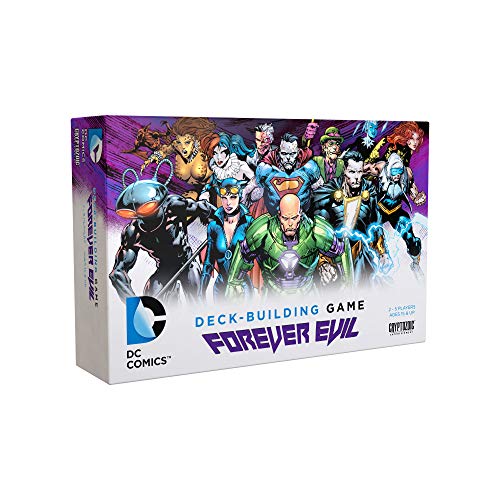 The Teen Titans crew makes their own deck-building debut here. This standalone expansion focuses heavily on the Teen Titans world and introduces all of the characters from the team.

The new cards introduce ongoing effects, so it’s worth planning several turns in advance to really bring the hurt. 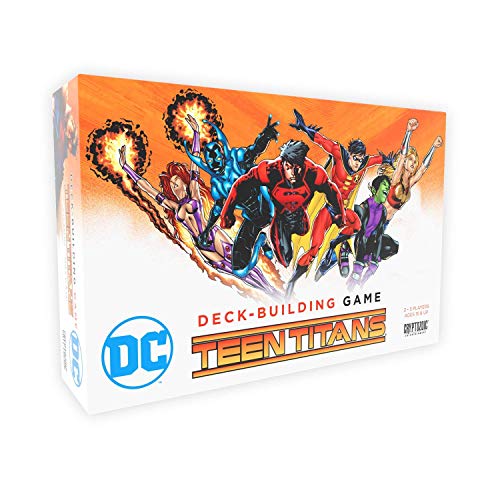 The Rivals series turns the DC Deck-Building Game into a duel. This standalone game has players facing off against another opponent.

Each side has both a hero and a villain and will be using their deck to attack their opponent’s hero/villain. The last one standing is victorious. 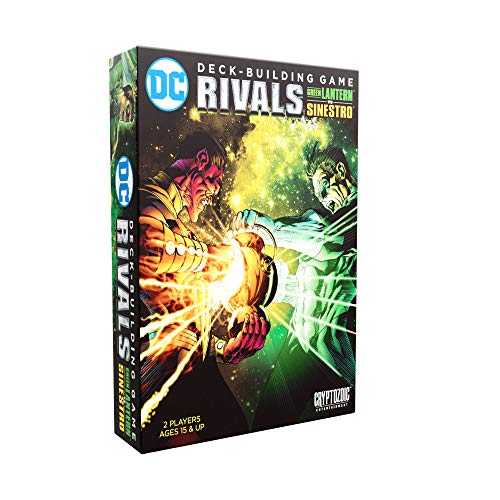 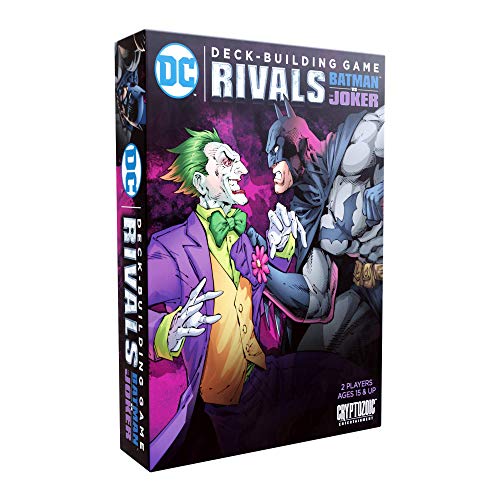 Comics have been all about alternate timelines and crossovers for some time now. It seems like every year each series gets a reboot to pursue a different storyline. The Multiverse Box adds that alternate reality into your game. Players will be able to fight alongside heroes and villains to claim control of an alternate reality.

This one is compatible with all DC Deck-Building games. 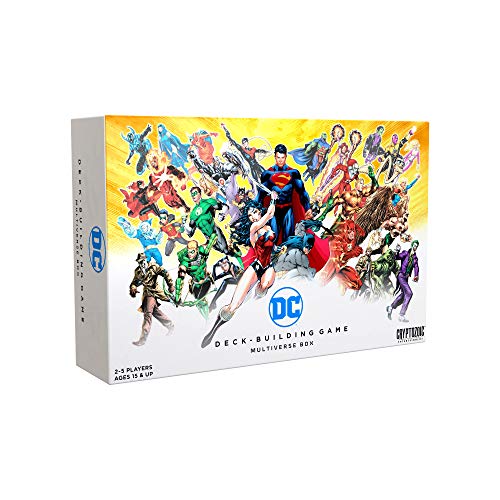 Confrontations expands on the mechanics introduced in Rivals. Instead of a one-on-one duel, the conflict grows to two-on-two. Players each choose a side and try to take down their opponent’s hero or villain before their own is defeated. 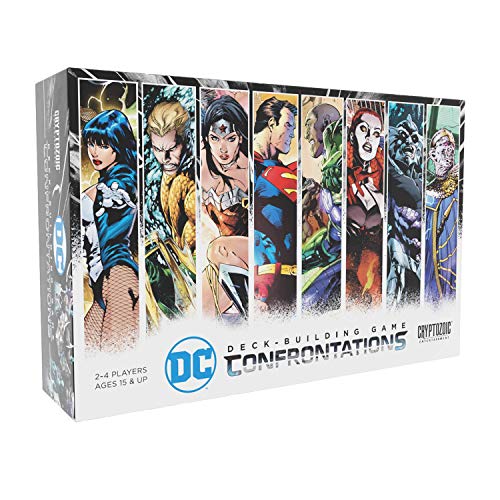 Perhaps the biggest expansion for the DC Deck-Building Game is the newest. Aptly named Rebirth, it looks to revamp the entire system by adding character progression, campaign mode, and character movement.

Because the DC Deck-Building Game was one of the first games in the series, Cryptozoic is looking to refine the lessons learned from later iterations of the Cerberus system and expand it in a bold new direction.

I haven’t tried it yet but I’m always excited about games with character progression and campaign modes. 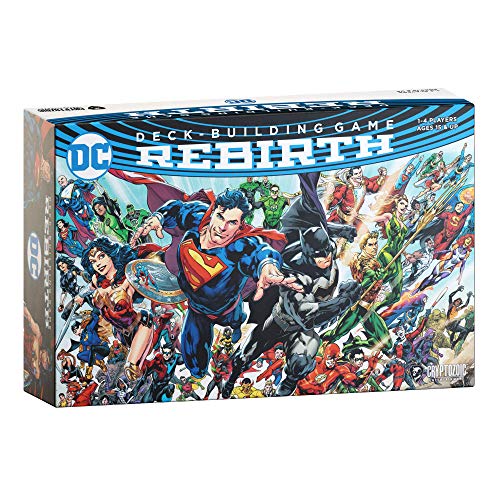 It’s a bunch of cards.

How to Play DC Deck-Building Game

If you’ve played any of the Cerberus system games, you’ll be right at home with this one.

Players start by picking a hero character or randomly choosing one from the stack. Each player begins the game with the same deck of 10 cards (7 Punch cards and 3 Vulnerability cards). Each player has a unique hero ability that they can use and also matches up with their hero persona.

These are the basic resources that allow players to purchase newer, more powerful cards to add to their decks. At the beginning of every turn, there is a line-up of five cards that can be purchased.

There will also always be the option to purchase a Kick card. These are superior to your starting cards but they’re not as good as some of the cards in the main lineup. It’s a good idea to get a few to help you but you don’t want to completely fill your deck with them.

Players draw 5 cards as their starting hand and can play as many as they want in any order. Each card has a different point value that can be used to purchase cards, attack, or that is worth victory points at the end of the game. The cards in the main lineup can also have special abilities on the card text that allow players to perform additional actions like discarding cards, drawing cards, getting cards for free, defense for attacks, or even removing cards from your deck permanently.

There is a special deck of villains in every game. Whenever players get enough points to match the villain’s strength, they can opt to attack the villain and defeat them. They’ll gain the villain card for their own deck, and they usually grant a pretty powerful bonus.

Be careful, though. On the next turn, a new villain will appear and attack all of the players.

There are two ways the game can end:

When either of these conditions is met, the game is over and all that’s left is to find out who won.

Most cards have some kind of victory point value printed on them. Players then tally up all of the victory points in their decks and the player with the most points wins. Ties are solved by whoever has defeated the most supervillains.

To start a standard game, you’ll need to set up your Villain deck. A standard game has players fighting a total of 8 villains. There are 12 total villains that come in the standard game, so if you feel like having an epic showdown, you can add more. Ra’s Al Ghul always starts first, though. So, in a standard game, there will be 7 random villains with Ra’s on top as the first villain to face.

Don’t worry about hero powers on your first game. Pick your favorite Heroine or Hero and form your deck around their abilities.

It’s not an absolute necessity that you need to build completely around the hero’s power either. If you see cards that seem particularly cool, you should absolutely go for it. There are times when your hero power can be completely negated, so there’s also an advantage to having a variety of cards.

I do have one bit of advice. I’ve played a lot of deck-building games and my first reaction is to simply buy everything. It’s fun, but maybe not the best way to play because then your deck is filled with a random assortment of crap. The more streamlined you can make your deck the better off you’ll be.

The three vulnerability cards that start in each player’s deck are completely worthless. They’re designed like that so they take up space in your deck/hand that could be filled with much better cards. You’ll want to try and trash those from your deck as quickly as possible.

The DC Deck-Building Game is an excellent gateway game. The rules are very easy to learn and pick up and once you know the Cerberus system, you can basically pick your favorite fandom (and chances are there’s a game built around it already).

I prefer the DC Deck-Building Game over the Legendary series to introduce newer players. There’s a lot less going on and it’s much easier to jump in and start playing. Legendary is fun, but its setup and tear-down are such a pain in the butt that I’ll usually leave it on the shelf in favor of a Cerberus game simply because they’re just easier to deal with.

This was one of the first games built for the Cerberus system. Since then, Cryptozoic has put out a ton of games for various fandoms. Anything from Rick & Morty, Adventure Time, Firefly, or Castle (Kendra really likes Nathan Fillion).

Because it was one of the firsts, it’s also a bit limited. The ruleset was still new and it’s one of the lighter systems in the series. This has, however, been remedied with all of the various expansions they’ve put out since.

There are a ton of different ways to play and new rules added with each expansion. There’s a duel version, a cooperative version, and like I mentioned earlier, Rebirth is adding character progression and campaign play to the series.

The DC Deck-Building Game is a lightweight, deck-building game in which players will be drafting cards and attacking villains.

The initial complaints about the game have basically all been accounted for in future expansions and most of the complaints that I’ve heard about were from players that just wanted more. (Never really a bad thing to leave your audience wanting an encore.)

I’m a huge fan of deck-builders and if you haven’t noticed, I’m also a big fan of Cryptozoic.

The DC Deck-Building Game is a great example and introduction to the mechanics. It changes up the system enough from the original deck builder, Dominion, that it keeps the mechanic fresh without being too convoluted.

I love the fact that there’s a goal in mind. Each player is working towards fighting a villain and I think that’s a really smart way to add some thematic flair. The problem with Dominion is that it’s pretty abstract in its goals. It’s all about the victory points at the end of the game. With DC, sure it’s all about the victory points, but there’s also this Ah ha! moment whenever you’re able to defeat a villain. It’s a simple but fantastic element that keeps me coming back.

Have you played the DC Comics Deck-Building Game? Let us know what you think by dropping a comment below.