An army of orcs, goblins, and trolls has massed on the horizon. They’ve surrounded your castle and now it’s your job to defend it. So, batten down the hatches, prime your archers at the ready and get the tar bubbling. This is a siege! Read the full Castle Panic Board Game Review below. 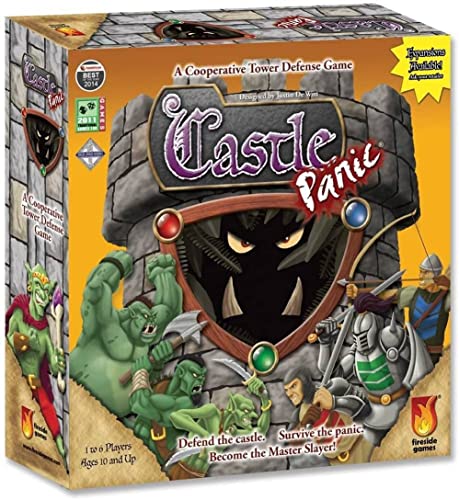 Castle Panic is a co-operative tower defense game for two to six players. You, the defenders of the castle, are tasked with working together to fend off an attacking mob of monsters.

Alongside playing cards to attack the monsters, you have the option to build defensive walls, fortify them with weapons, and set traps to slow your attackers down.

You and your companions win and lose as a team, and can only do so by working together and sharing resources. That said, only one person can be named the Master Slayer at the end…

This is a straightforward expansion to the original game. Adding a Merlin-esque element to the theme, you’ll find yourself defending a wizard’s tower, with all the added magical benefits that come with it. However, the monsters have been upgraded, too. 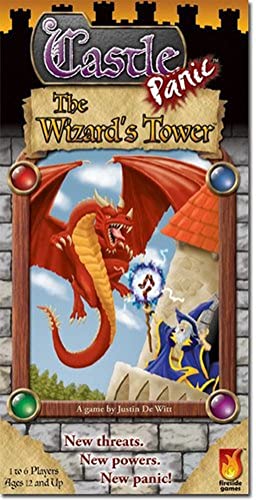 It’s back to your bog-standard, non-magical castle with this one. However, your old enemy, Agranok, has returned. He’s brought a bunch of more powerful monsters with him, too. However, luckily there’s a lot of extra goodies to kit your defenses out with, too. 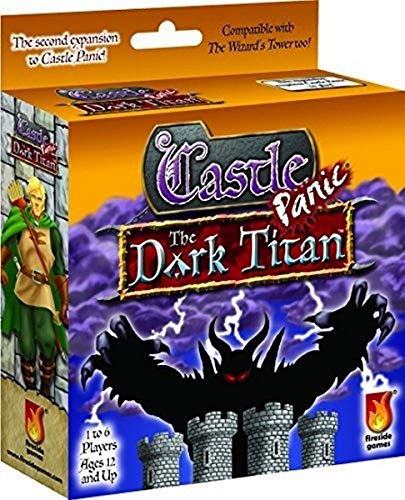 This expansion adds some classic siege weaponry into the game, on both sides, including siege towers, catapults and – everyone’s favorite – the battering ram. It can be mixed in with either of the above expansions. 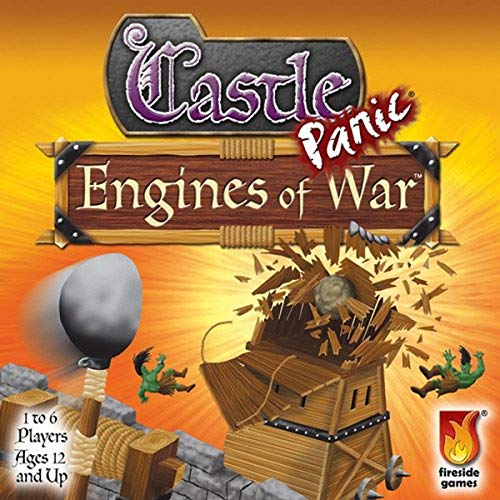 Ever wondered what you need to defend a castle? See below:

First things first, I always like to pay tribute to a rulebook that’s been well put together. Castle Panic ticks this box resoundingly, with a very clear and intuitive explanation of the rules of play, along with a little bit of personality mixed in. Thumbs up from me straight away here.

However, the second thing that struck me was how underwhelming the artwork is. There’s nothing overtly wrong. But that’s about all I can say about it. It’s just exceedingly… fine. Medieval era games, books, etc all seem to have a very samey feel, and I was disappointed this took the same tack. That said, I understand that this is clearly a family game, so there’s only so ghoulish they could really go.

Similarly, the actual components are also very fit for purpose but don’t go any further than that. The castle pieces are probably the highest risk as they need to stand upright. These felt sturdy enough, though, despite being made out of cardboard.

The one slight exception to the trend of adequacy among the components is the board itself, which I really liked. It had strong, bold colors (which slightly clashed with the more plain cards) and helpful tips and reminders are written onto it, too.

How to Play Castle Panic

The aim of the game is to defend your castle from the army of monsters attacking you from the woods. It’s a co-operative game, so you win or lose as a team. However, bear in mind that in the end, only one player will be crowned as the Master Slayer.

The play area of the board is circular, and in the middle is your castle. It’s surrounded by five rings, labelled, from outwards in: Forest > Archer > Knight > Swordsman > Castle. Walls can be built on the lines in between the rings that defend your castle.

The circle is also split into six arcs, colored red, green and blue.

Your team starts with towers in the center of the board and walls surrounding your castle. Six monster tokens – three Goblins, two Orcs and one Troll – are also placed on the board. The rest are left upturned and mixed up.

Players are then dealt a number of Castle Cards, depending on how many players there are.

There are six phases to a player’s turn.

Attack cards work in different ways. Most of them must match both the color and the ring location of a monster to make a hit. Some, such as the Archer, Knight, and Swordsman cards, damage all monsters in their respective rings. Also, only the Barbarian, Tar, and Drive Him Back! cards can hit monsters that have made it into your castle.

If you knock a monster down to zero health, then you get to keep their token as a trophy.

There are various other actions you can take, too. Such as building defensive walls, fortifying them with weapons, or pouring Tar onto monsters to slow them down. There’s even a Scavenge card that lets you search through the discard pile for any card you like.

You’ll be coming up against 49 monsters in this battle, the main ones being the Goblins, Orcs, and Trolls. However, there are also Boss monsters, like the Goblin King and Orc Warlord, who are much harder to slay and have special powers to boot.

You’re also able to draw monster effects. These affect several monsters or players on the board. For example, it might move forward every monster in a blue arc one space. Things can suddenly start getting very sticky, very quickly.

When a monster enters the Castle Ring and is on a Tower space, the Tower is destroyed permanently. Next move, if the monster’s not been slain, they progress around the Castle Ring one more space. If all Towers become destroyed then the players lose the game.

To win, you must hold out long enough to slay all 49 monsters.

At the end of the game, if victorious, players add up how many Victory Points they earned by slaying monsters (4 points for a Boss; 3 for a Troll; 2 for an Orc; 1 for a Goblin).

Whoever has the most points is named the Master Slayer!

Your First Game of Castle Panic

It’s worth mentioning that Castle Panic is billed as being for two to six players (there is also a solitaire version, for one daring lone castle defender!). However, this game works best with four players, as it can get very difficult otherwise.

On your first game of Castle Panic, I’d recommend just focusing on winning as a team, rather than the Master Slayer aspect. This is a tough game and, even if you can’t help but do some preliminary planning of your Master Slayer crowning ceremony in the back of your mind, remember that this will all be pointless if your castle ends up overrun by Monsters.

In the same spirit, don’t be stubborn and hold on to your best cards if it will improve your team’s chances of winning to trade them. You’ll likely be meeting your demise pretty quickly if you do!

When it comes to strategy, make sure you pay close attention to all monsters on the board, and the cards in other players’ hands. One awkward Monster Effect could leave you in a very precarious position if you don’t have the cards ready to respond to it. Be vocal with your team and recommend trades even if it’s not your turn.

First off, what I really like about this co-op is that it really is truly that – a co-op. There’s lots of opportunity for strategy here, but it all centers around effective communication among the players and making sure they are working in the same direction.

For those that enjoy a more social engagement and a game that relies on a proper team effort, this is sure to get the discussion flowing if played properly. Likewise, when we did find ourselves overrun by Boss Monsters and their cronies, I loved how we were all able to pull together to try and make a breakthrough.

Also, despite being a relatively basic game in the grand scheme of things, there’s still a lot of potential for strategy and foresight here. You have to keep in mind where monsters are going to be in two or three turns’ time to avoid being stormed. If you can, try and create a pile-up in one type of space and set your teammate up for a killer blow. If you ask me, it’s the perfect level for newbies.

The Master Slayer element I found a little confusing sometimes in terms of priorities. I didn’t always know if my teammates were playing for the title, and whether or not this affected their decision-making. Or perhaps they didn’t care at all. I didn’t find this to be a problem, though. Often, as the Trolls approached, co-operation won out and we forgot about it altogether – it would just prove to be a nice surprise at the end.

When it comes to things I didn’t like so much, I think there could have been a bit more effort put into the theme, or mixing up the monsters. Other than the bosses, I got a little tired of the not-so-well-animated hordes of Orcs and Goblins.

Similarly, there’s not a great deal of replayability here. Like many tower defense games, there are strategies you can work out over time that dramatically increase your chances of winning. While there are random elements to the game, there’s plenty that a seasoned Castle Panic gamer can do to make it easy.

Fireside Games do include a variation on the main rules, along with a few additional house rule options, but they only add a limited amount of time to the lifespan before it’s been-there-done-that.

Castle Panic is a super-co-operative tower defense game that pits you, the castle defenders, against a rabble of goblins, orcs and trolls determined to break your castle walls.

By working together and trading cards, your job is to defeat the monster army before they destroy all your towers. It’s not the most complex of co-ops out there, but the social and interaction element makes Castle Panic an incredibly fun team game.

Having spent many years of my youth playing tower defense games on Miniclip, it was great to be able to put my revision to use in a tabletop arena. Castle Panic brilliantly recreates the genre, and it was especially fun to be taking on the format as part of a group, rather than on my own in my underwear in a darkened room at midnight.

It isn’t the most complex of co-ops, therefore I think it would be a fantastic introductory game for new or younger gamers. You’re bound to have a bunch of fun the first few times you play it, with the teamwork elements really shining here.

That said, over time, as the game becomes more familiar, you might find it becomes a little tried and tested. But it’ll take many hours of gameplay before to get to that point. So, unless you’re particularly concerned about the hours-to-dollars ratio, I think it’s a solid investment for anyone in need of an accessible introduction to the world of co-op gaming.