Cascadia was one of the most anticipated games and now that it’s finally out, it has been sweeping the most prestigious board game awards, including the 2022 Spiel des Jahres!

The theme of the game is centered around Cascadia, a region of North America spanning along the west coast of the USA and Canada. Players will shape the ecosystem with native wildlife and habitats by placing tiles in this fast and engaging board game! 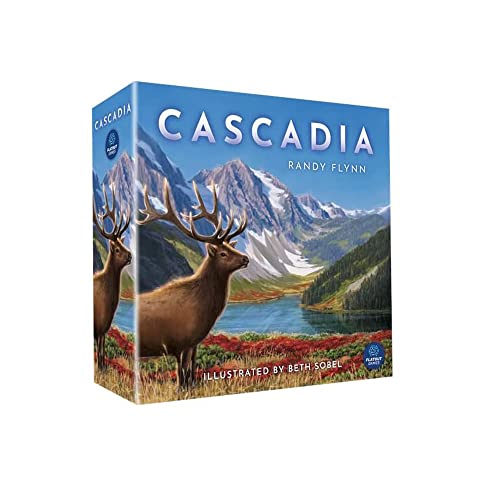 Cascadia can be described as a drafting game with tile and token placement elements. Rounds consist of drafting one habitat tile and wildlife token, then arranging them in player environments.

If your first impression was that the game seems similar to Wingspan, you’re half-right. Beth Sobel, the lead artist, has also illustrated Wingspan, and her style of art completely fits the theme.

Cascadia is quite easy to learn and can be played by 1 to 4 players. The playtime is between 30 and 45 minutes, making it a great family game.

When you look at the list of components, you might assume that it’s lacking considering the price of the game. I had a similar first impression when I read the table of contents, but as soon as I opened the box, I was pleasantly surprised.

The tiles in Cascadia are almost big enough to be drink coasters. Not only does this make the game track the progress of the game, but it also provided space for the artist to make great illustrations of the habitats.

The tokens could have also been made out of punchout cardboard, but they’re made out of painted wood instead, adding a lot more value. Even the cards are oversized, just to make them easier to read.

The value of a board game is not reflected in the number of components it comes with, but it’s still nice to see that some of the cash you spend isn’t going just for the intellectual costs, but also the production value.

Even though the game pieces consist of a handful of cards, some tokens, and tiles, the game designers have done an amazing job of making them the best components possible.

How to Play Cascadia

Cascadia is easy to learn and it’s one of those games that you can put on the table in front of everyone and learn to play as you go. The rules are simple and intuitive, and after the first couple of rounds, you’ll get an idea of how the game flows.

Still, I’ll make a quick overview of the rules and break down the core mechanics so you can figure out whether it’s something you’d enjoy or not.

Before you can start the game, you need to quickly set up the game pieces. The number of players determines the number of habitat tiles used during the game.

Tiles are removed randomly, then shuffled and stacked face-down where all players can reach them. All of the wildlife tokens are placed in the cloth bag and shuffled.

The wildlife scoring cards are divided into five categories: Bear, Elk, Salmon, Hawk, and Fox. Shuffle the categories individually and draw one of each to form the scoring conditions for the game.

Give each player a starter habitat tile, then draw 4 habitats from the stack and line them in the middle of the table. Draw 4 wildlife tokens from the bag, and place them one by one beneath the habitat tiles to form the draft options.

Cascadia is played over exactly 20 turns consisting of drafting and tile laying. Players take one of the habitat tiles and wildlife token combinations from the board and play them into their environment.

Once the player has made their choice and completed their turn, a new token and tile are placed on the drafting board, so at all times players have a choice between 4 options. If there are no more tiles to be drawn from the pile, the game ends and the scoring can begin.

The draft tiles and tokens are arranged in four columns and are picked by the players, starting with the first and proceeding clockwise.

If there are four of the same wildlife tokens on the board, put them aside and draw four new tokens to take their place. In case there are three of the same tokens, the active player can choose to mulligan those for new ones.

Usually, you’re supposed to pick one of the premade tile and token combinations, but if you utilize a nature token, you get a couple more options:

Once you take a wildlife token and a habitat tile from the draft, you can place them in any order into your environment. You’ll start with one habitat tile already in the game and expand around it. Tiles can only be placed adjacent to existing tiles, so you’ve always got just one expanding environment.

Wildlife tokens are placed on top of the habitat tiles. The rule is that only one token can be placed on a single tile, and the habitat must match the animal on the token. If you can’t or wish not to place the wildlife token, you have to return it to the cloth bag.

Once a player has completed their turn, a new habitat tile and wildlife token are drawn and placed on the draft board.

During the game, you’ll constantly pick new habitat tiles and expand your environment board. There is some strategy involved in choosing habitat tiles, as they’ve got three important attributes:

Terrain adds the element of tile rotation as you try to position the tiles to create the largest biomes possible (habitat corridors). The animals drawn on the tile dictate which tokens can be placed on the tile. If the tile has a keystone marker, matching the habitat with the drawn wildlife will get you a nature token.

Your First Game of Cascadia

The mechanics may seem very simple as if Cascadia is a variation of Carcassone, but the scoring, and strategy involved in gaining the most points make all the difference.

During your first game of Cascadia, pay attention to the following criteria, and the strategy involved in gaining the most points.

The wildlife scoring cards are drawn at the start of the game and provide points based on the tier you’ve satisfied. For example, one of the Elk cards awards points for a straight line of elk tokens. One Elk awards 2 points, two Elks award 5 points, and so on.

The largest group of each habitat awards points, so ideally, you’d want to have only one habitat of each type in your environment, rather than piece it out into several smaller ones. If any of your habitats is also the largest out of all players, you’ll score additional points.

Remember that there are 5 habitats, so you’re going to score the 5 largest habitats in your environment, and also compete for each largest habitat in the entire game.

Each of the animal types has its own set of rules on how it should be grouped. The scoring cards will show you exactly how each of the wildlife tokens should be placed, so review them frequently throughout the game.

If you’ve only seen a few screenshots of gameplay and the 1.87/5 weight rating on BGG, you may assume that Cascadia is a simple game that quickly runs out of steam.

However, it’s anything but and is an excellent example of how a game can be both deep and enjoyable without burdening the players with hours of prep time.

You’ll have fun with the first game, figure out the strategies by the third game and start to really get a hang of things after that. The setup and the number of players change the dynamic of the game, so each session will be different and enjoyable.

Beth Sobel nails the theme, and it’s only a shame that the design of the components didn’t give her enough opportunities to show off her great art as she did for Wingspan.

Some would say that Cascadia uses a token theme that is completely interchangeable, but I strongly disagree. Unless it’s something like alchemy or chemistry, any other theme would not have worked due to the symbiotic and harmonious nature of the gameplay.

The only drawback of tile drafting is the inevitable elements of luck, but I would say that Cascadia does its best to avoid it as much as possible.

The automatic and optional shuffling of tokens as well as the nature tokens greatly reduce the luck aspect — and put control back into the hands of the players. But the main issue is the habitat tiles.

As these cannot be swapped out, you’ll have to work with the hand you’ve been dealt. It can be a little frustrating to not get the habitat tile you need, or see it swept by another player, but as the game plays out over 20 rounds, most of the time it’s just an exercise in patience.

There is an abundance of tile-placing puzzle games on the market and yet Cascadia managed to deliver refreshing and highly enjoyable gameplay that quickly got it to the top charts of all board game rankings!

Cascadia is a perfect family game that is equally fun with friends. Learning it takes no effort at all and with the playtime of 30 to 45 minutes, I’m sure you’ll find plenty of opportunities to play it.

One of the main perks of reviewing board games is that you’ve got a great opportunity to experience games outside of your comfort zone, and even change your opinion on certain genres.

The only game akin to Cascadia I can remember playing is Carcassonne, and that’s one of my least favorite board games. However, I can say I was looking forward to playing Cascadia as everything from the art style to gameplay seemed right up my alley. My expectations were met in full, and I’ve thoroughly enjoyed my time with Cascadia.

Once I figured out how it plays, I’ve actually stopped playing it to write this review and take a short break. The thing is, I don’t want to master this game, but rather pick it up a couple of times a month and have some fun. If you’re looking for a fun and semi-casual game, you’re also going to have a blast with Cascadia!

We hope you enjoyed our Cascadia review! Have you tried playing this beautiful pattern-building board game? Drop a comment below and let us know what you think! We’d love to hear from you.

PrevPreviousSpyfall 2 Review
NextBest Back to School Board GamesNext