Have you ever watched a horror movie set in a haunted mansion and wondered who left that crossbow in the attic? In Betrayal Legacy, that person is none other than you! 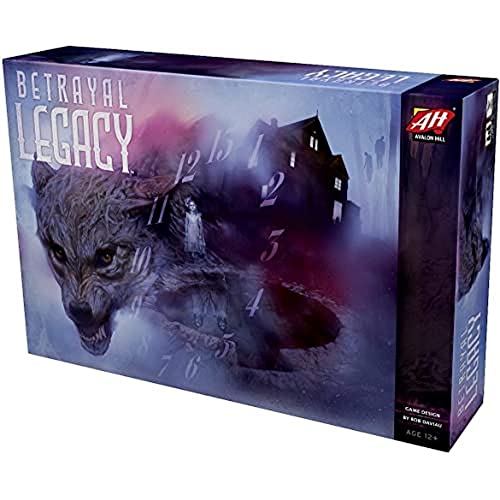 It turns out that mixing the essence of Betrayal at House on the Hill and the legacy game system works quite well. In Betrayal Legacy, 3 to 5 players engage in a story-heavy adventure. The heroes are tasked with surviving in the Haunt that is inevitably going to appear but also with figuring out if there is a traitor among them.

In the overarching story, each chapter takes you forward in time as you play through generations of a family. Decisions your character makes now can (and will) affect the future and will also affect the physical game itself.

Once you’ve played through the tutorial and all of the chapters, you’re left with a customizable and re-playable version of the Betrayal at House on the Hill!

What you’ll get in the Betrayal Legacy box is:

The quality of board game components has always been an important consideration and Betrayal Legacy did not disappoint, for the most part. The cards are fairly large and well made, as are the colored books. The cardboard pieces pop out of their cutout which is common practice.

The clip stats trackers are back, despite being one of the main criticisms of the original game. This time, they’ve at least done a somewhat better job at it, as the stats are positioned on each side of the oversized family card, making it less likely to accidentally slide the clip. You can give it a chance, but if it doesn’t work out, I suggest using a piece of paper and writing all of the stats down with a pencil or using the companion app.

The second thing to address is the quality of the miniatures. I know that their looks don’t matter too much, but these colored figures look like something you’d find in a dollar store.

The colored bases as well as different heights and poses of the characters are more than enough to avoid any confusion about which one’s which. This makes me wonder why the creators didn’t opt for more detailed designs at the expense of the rather poor coloring.

Despite being critical of some, I still rather like the general aesthetic of the components, especially the details and color palette of the map tiles. As for the figures, you could always do some DIY painting to hone your skills, especially if you plan on painting unicolor miniatures in the future.

How to Play Betrayal Legacy

The first rule of playing Betrayal Legacy is: do not touch anything that the game doesn’t tell you to. The legacy deck mustn’t be shuffled, the purgatory deck shouldn’t even be looked at, and the sealed components should stay that way until instructed otherwise.

This is first and foremost a story game with many twists and turns and even knowing what items you might get can ruin the surprise and take away from the experience.

Now that we’ve gotten that out of the way, we can prepare the game based on the chapter we’ve reached. Players of Betrayal at House on the Hill will find most concepts familiar and can take a look at page 3 of the rulebook that explains any differences with the original.

Take your character’s Family card and attach a clip to each side to keep track of Speed, Might, Sanity, and Knowledge. These traits are set to a base value, but will often decrease, or increase depending on the situation.

The back of the Family card serves to keep track of your character’s lineage. You’re going to name your first character and assign them an age, while their fate will be decided during the chapter. If they survive, they can continue participating in future scenarios, but if they die, write down their fate, and create an offspring or a relative to carry on.

Each turn has three steps to it:

Exploration plays an important role in Betrayal, so you’ll be moving from one tile to another or to discover new tiles. If you happen to stand on a small or large obstacle, it will take extra move points to get off the tile, with monster tokens working the same way. No matter how hindered you are, you can always move to one adjacent tile from your current position.

As you discover new tiles, there might be a few things you might need to resolve, including drawing an Event, Item, or Omen card. There’s quite a lot going on in these situations, so it’s best that you carefully follow the rulebook guidelines.

Initially, the only action your character can take is to attack, but Items, Omens, and tiles might grant you more. Tile actions can only be used while you’re still on them, while Items and Omens need to be carried and still unused.

To attack, first choose a target, then roll as many dice as your Might and do any rerolls, if possible. Then, the defender rolls against you using the same method and if they score lower, the difference will represent the amount of damage they take, but the same applies to you.

Even if you defeat a monster, it will not die and will instead be stunned. You can continue attacking stunned enemies to either steal from them or to kill them with a special artifact. They will still defend in the same way, but you cannot take damage no matter the outcome.

Each time an Omen card is drawn, you’ll have to make a haunt roll with chances of it happening getting higher with the number of Omens. At this point, the players will split into heroes and a traitor and work towards the specified goal to achieve victory. The tension grows with each haunt roll and the panic that inevitably ensues is what makes this game so much fun to play.

Your First Game of Betrayal Legacy

Being on the same page with other players is very important for this game. You don’t have to finish the game in one sitting, nor do I recommend it. The ideal experience will be to start and finish the game with the same group.

Feel free to add as many roleplay elements to the story as you’d like. The game’s great in the sense that it does not require any roleplaying but it’ll happen naturally as you grow more attached to your family’s lineage.

A Betrayal Legacy campaign can be truly experienced only once, so pay extra attention to the rules to avoid any spoilers that might ruin the experience. Don’t expect to win every time and don’t fall into the temptation of re-rolling or altering a result. The story is built on the success and failure of your characters and it would take a lot out of it if you messed with the outcomes.

Each player should have a few pens which can write on the cards and stickers. Don’t be afraid to mess with this set – that’s what it’s there for. The stickers provided with the game aren’t the greatest, so make sure to press hard and mark the cards before applying the ghost sticker to know one was there even if the sticker falls off.

When you encounter a tile with an inhabitant symbol that has an effect, you should always do that effect. The rules aren’t clear on this and sometimes it might seem like you shouldn’t, even the very first time you have encountered them. This might seem confusing right now but when you get into this situation in the game, trust me, it’ll make sense.

There are so many games where the cards, abilities, and goals are clearly well thought out and work together to establish a theme and lore, yet they quickly boil down to just looking at the stats and competing with other players.

In Betrayal Legacy you don’t have to read the flavor text on each card, but I’m certain that you will anyway. Once an item becomes a family heirloom, a descendant of the original owner may come across it and receive additional perks for using it. After all, it has helped their great-grandfather in the past, so it’s gotta be useful.

Tying mechanics into a deep story naturally brings out roleplay in people, even though it’s unnecessary. It’s just so much fun to have a black sheep in the family or a son making up for his father’s treachery.

As mentioned in the unboxing, the figures for family members are really not up to standard. Not only are they shapeless, with facial figures and hands barely recognizable, but the coloring also makes them even worse. Rather than touching them up and making them serviceable, I completely swapped them with figures I had available from other games.

From the gameplay standpoint, the main criticism can be directed towards the way haunts work. Haunts happen at random times but do have a higher chance of starting as the game progresses and more Omens are found. Still, if one happens too soon, or a traitor is set up in such a way that they have a guaranteed win, you can more or less just resign to your fate.

Betrayal Legacy will set you on a campaign to rediscover the haunted mansion again, with each room discovered and each action is taken having permanent effects on the layout and future scenarios. If you’ve never played a Legacy-type game, this is one of the best places to start.

In video game terms, this feels like a mix between a Telltale game and a rogue-like game. Each scenario brought more to explore and do, and I’d be lying if I said I didn’t have fun. There’s so much to this game that I can clearly see why some are calling it the best Legacy game available.

My party and I went into Legacy without previously playing Betrayal at House on the Hill and after we finished all of the scenarios, we got a personalized version of the original game. While there’s certainly an element of replayability to the game, the core of the game is still a one-time experience.

I can see how this sense of finality might not appeal to everyone, especially since it’s not exactly resale-friendly. Still, the more condensed and exciting experience of the thirteen chapters makes it well worth the money.

If you plan to play it through with another four people, there’s no better game to buy into together. Trust me, you won’t regret it, and it might just become one of the best board games you’ve ever played.

We hope you enjoyed our Betrayal Legacy review. Have you tried it yet? Drop a comment below – but NO spoilers, please!

Find even more Legacy Games to play below: