Spider-Man is definitely one of our favorite superheroes. He’s smart, he’s funny, and he’s fast. He’s got superhuman strength and spidey senses that can detect danger all over town.

This lovable Marvel hero has become a huge fan-favorite, so it’s no surprise that he’s made his debut in the world of board games. Kids, teens, adults, and all Spider-Man fans alike, are sure to get excited about these classic game adaptations.

So, if you’re eager for some superhero fun, look no further. We’ve compiled our list of the top Spider-Man-themed board games on the market. Check out our list of the best Spiderman games

🏆 Our Top Picks for Best Spider-Man Board Games

In a hurry? Take a quick peek before you go at the best Spiderman Board Games. 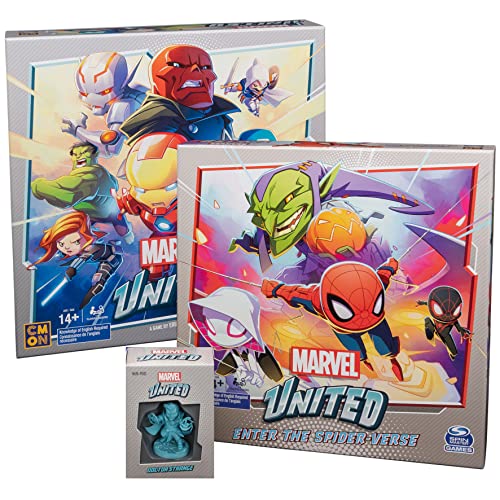 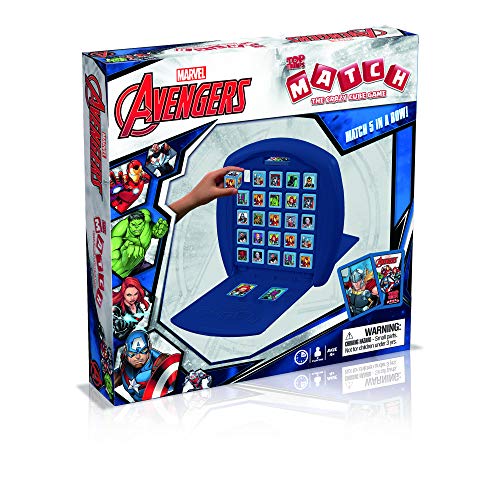 Marvel Avengers Top Trumps Match Board Game
Marvel Top Trumps is a great game to pack up and go. Whether you’re camped out in line waiting for the newest movie or heading out on a family picnic/road trip, it’s easy and fun to play on the go.
$27.99
Buy on Amazon

Marvel Legendary
For a big-box Marvel game, Legendary wins hands down. It has all your favorite characters, including Spiderman, and it packs a punch when it comes to strategy and gameplay.
$71.45
Buy on Amazon

The Marvel Avengers Assemble Edition features 15 of your favorite Marvel superheroes, including Spider-Man. This crazy cube game invites you to race against your opponent to match five cubes in a row – vertically, diagonally, or horizontally. Be the first to match all your characters and win the game.

But be careful, watch out for the twist. If your opponent’s Top Trump cards match your row of five, they steal the win.

Stack the disks in rows of four – horizontally, vertically, or diagonally – to win the game. The first player to secure four in a row wins! 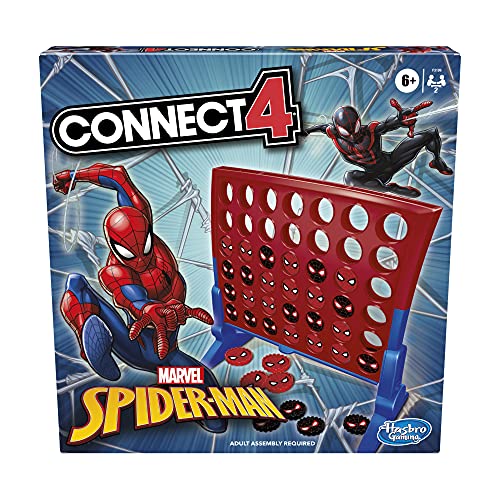 Memory Match is a great game for enhancing memory skills and hand-eye coordination through interactive, educational play. If you’re looking to please some Spider-Man fans, this edition is sure to spark their interest!

To play, mix up the cards and turn them face down in rows. In each turn, players can choose any two cards to turn over. As the game progresses, players will have to put their spidey senses to the test, to find card matches. At the end of the games, the player with the most matches, wins! 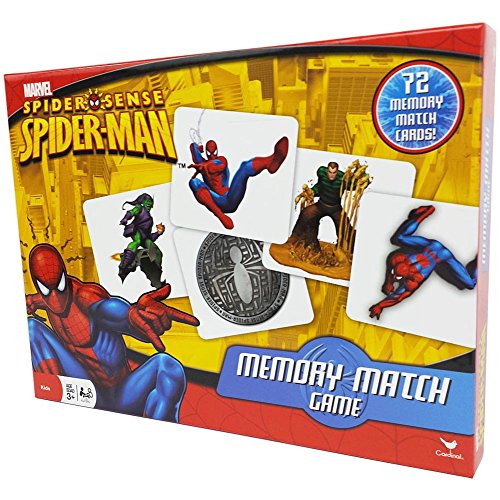 Making their long-awaited return to the Legendary Universe, Spider-Man and his allies are here to save the day with Paint the Town Red Expansion pack. The fan-favorite characters, Black Suit Spiderman and the evil mastermind, Carnage, are featured in this pack. This expansion offers 5 new heroes, 2 new villains, 2 new masterminds, and 4 new schemes to play.

The Core Set is required for gameplay with this expansion pack. The core set, Universe, Legendary: A Marvel Deck Building Game, is set in the MCU and invites players to assemble their team of the finest Marvel heroes to combat evil masterminds and thwart their schemes. In this thematic card game, players choose a number of hero decks (such as Spider-Man, Wolverine, the Hulk, and etc.) and a mastermind villain (Loki, Dr. Doom, Magneto, and etc.).

Throughout the game, players will recruit hero cards to add to their deck and strengthen their resources. As players fight to defeat the villains, they get to collect cards, which are worth points at the end of the game. Once all the cards have been claimed, the game ends and the player with the most points wins!

Yahtzee Jr. is the superhero thematic take on this classic dice rolling game. Designed for younger audiences, ages 4+, this game is sure to excite Marvel fans, as they develop their counting and matching skills through fun gameplay.

The objective of the game is to earn points by rolling five dice, to make specific score combinations. On each turn, the dice can be rolled up to three times but must remain in the box. The game consists of 13 rounds where scoring categories vary, depending on the point values. At the end of the game, the winner is the player who scores the most points. 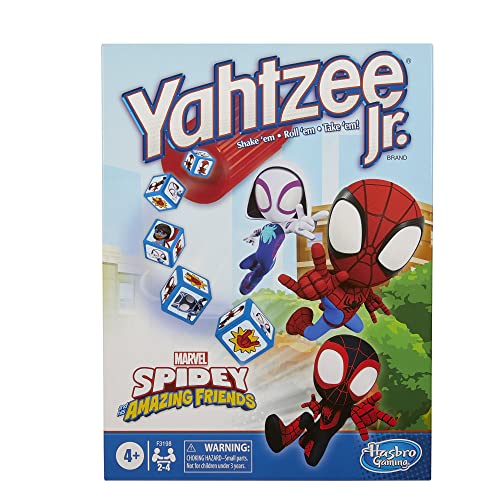 Marvel Super-Hero Adventure Matching Game is designed for players ages 3+. The game includes 72 memory match cards and comes with clear and easy instructions to follow. It takes just 15 minutes to play, and less than 5 minutes to teach for endless fun with children and families.

This classic, picture-matching game now features all of the best Marvel Superheroes! Develop critical focus, memory, and matching skills with characters that your youngsters will love. Challenge your kids and put their superpowers to the test to match all of the Marvel heroes. This set features characters like Spider-Man, Thor, Captain America, Loki, Venom, and many more. 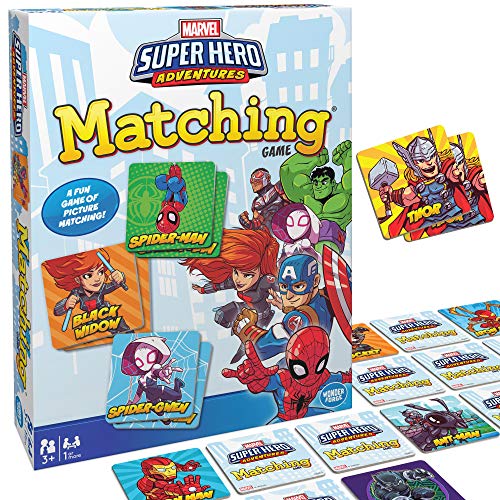 In the core set, players take the role of iconic heroes and must cooperate to stop the master plan of a powerful villain. Throughout the game, each villain unveils their unique master plan as different cards begin to trigger different effects and pose unique challenges. Heroes need to be strategic as they combine the actions of their superheroes to do the impossible and stop the evil villain.

The Spider-Verse expansion pack offers new heroes to play, and new villains to beat. For 1-4 players, ages 8+, this game is bound to excite. So, get ready to unite your powers, build your story, and save the day!

The classic Chutes & Ladders now has a Marvel edition, ready to excite the young superhero fans. Play as Spider-Man, Power Man, Venom, Iron Spider, Green Goblin, Rhino, Black Cat, or White Tiger. As you jump around the board, you need to move where the spinner tells you, watch out for chutes, and climb ladders to reach the 100th square tile.

The game set includes the game board, instructions, the spinner with an arrow and base, 4 pawn stands, and 8 character pawns. 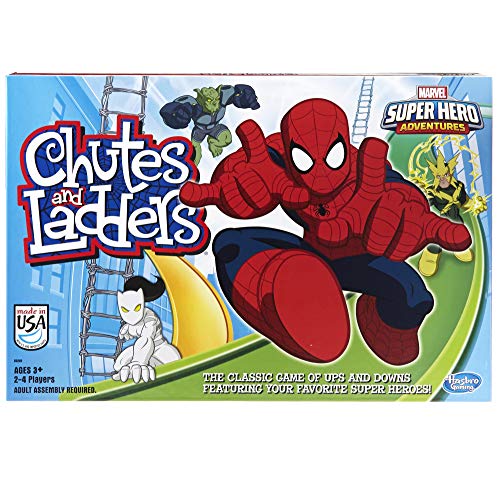 Get ready for the ultimate Spider-Man game with Marvel Trivia! Compete with your friends, and family to claim victory as a true Spider-Man superfan.

This trivia game is based on the world of Marvel comics with each question card containing a selection of questions with varying difficulty. As you progress through the game, the questions get harder, and the competition becomes more intense.

Are you ready to claim the title as the ultimate Spider-Man fan? 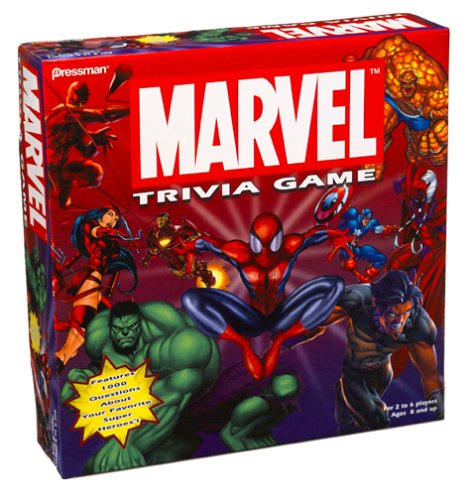 We hope you enjoyed our list of the best Spider-Man board games! We have no doubt that these Marvel-thematic games will be a hit for you, your young ones, and other superhero fans. Spider-Man has made his mark on many of these classic board games, and we’re beyond excited to share this list with you!

If we happened to miss any of your favorite Spider-Man games, be sure to leave us a comment. Also, let us know what you think of the ones that we have suggested, we’d love to hear from you!

Looking for more Marvel Games? Check out out video below: