History can seem like a stuffy subject, especially when it’s coming from an ancient tome covered in dust and infested with moths. The figures and characters we read about were very real people who put events into motion that still affect the world we live in today.

The games in this article will put you in the driver’s seat of history and give you the power to conquer most of Europe! History comes to life as you make decisions that will affect the balance of power for generations. Take your place on the Emperor’s throne and lead your armies to victory! Vive la France!

🏆 Our Top Picks for Best Napoleonic Wars Board Games

In a hurry? Take a quick peek before you go. Find the Best Napoleonic Wars Board Games below. 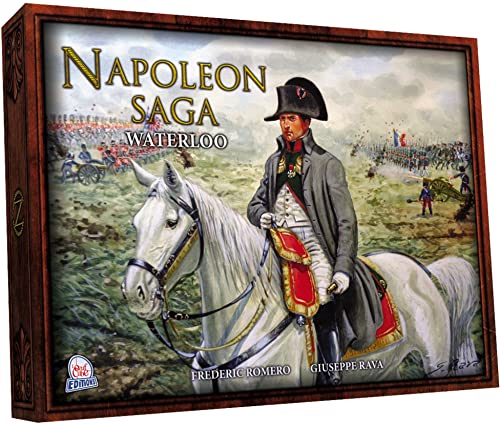 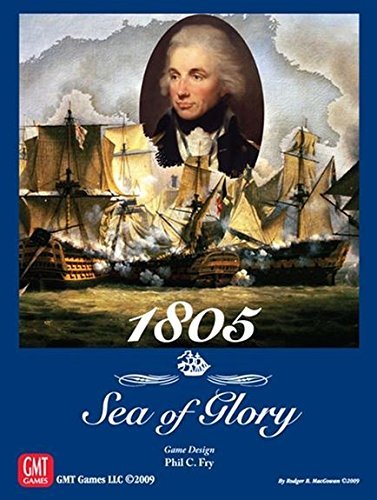 The year is 1805 and the balance of power in Europe is teetering on the edge of total French domination. Only the great powers of Britain, Austria, and Russia can stand up to France and her allies.

Russian Generals Bagration and Tormasov stand ready to foil the progress of French Generals Davout and Ney. For those who have ever wanted to try their hand at being a general or a diplomat, this game provides an immersive experience.

In addition to General Cards and Victory Points, players will draw Event cards which include scenarios such as “Napoleon Abdicates,” or “Irish Uprising.” These event cards add historical flavor to the game by bringing up actual scenes from the Napoleonic Wars.

Get the First Edition on Noble Knight Games here or the check availability on Amazon: 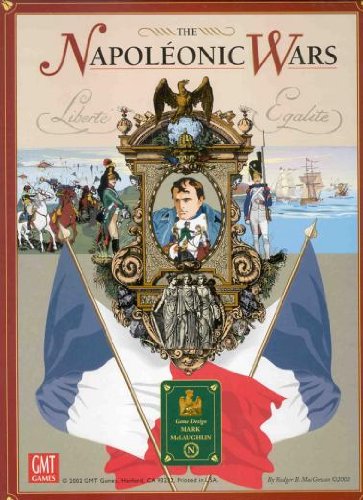 Empires in Arms puts players in the position of the autocratic rulers of Europe, from Emperor Napoleon of France to Tsar Alexander I of Russia and the incapacitated King George III of Britain.

The board itself unfolds like a traditional map that General Horatio Nelson himself might have used. This game is perfect for the serious International Relations junkie who always imagined they would be able to negotiate a lasting peace in Europe, no small feat in the age of Metternich.

Players will battle through the 132 months of the Napoleonic wars with one month representing one turn. Each month contains different aspects of gameplay, those being Diplomacy, Reinforcement, Naval, and Land, where the major land battles take place.

Every third month will trigger an Economic phase, where players will purchase future reinforcements and other resources. Players will roll the dice to inflict kills and morale losses onto combatant troops to conquer territories and attempt to dominate Europe!

Get Empires in Arms from Noble Knight Games or check availability on Amazon.

This game differs from the previous ones by being designed only for two players. One player takes on the role of Napoleon, Emperor of France, and the other player represents Britain and her allies.

Age of Napoleon offers a condensed approach to gameplay and battle strategy. Players must even grapple with the elements and endure harsh winter conditions, with soldier losses factored in. Let’s hope players learn never to invade Russia during winter!

Get Age of Napoleon from Noble Knight Games or check availability on Amazon. 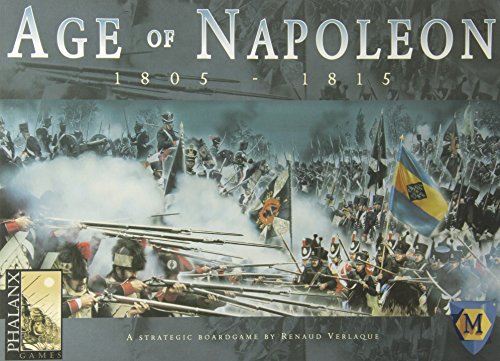 Age of Napoleon
Buy on Amazon

Although the land-based battles of the Napoleonic Wars receive the bulk of historical attention, naval battles between France and her enemies took place from the Indian Ocean to the Caribbean.

This game is designed for two players, one representing the alliance of France and Spain and the other, the British Royal Navy. Players must fortify their ports while preparing fleets for battles at sea. Naval movements can be disguised on the board and ultimately, the players must take a risk to find out if a small or large fleet is concealed.

Get 1805: Sea of Glory from Noble Knight Games or check availability on Amazon.

The game itself is divided into 3 historical parts which represent eras of the drawn-out Napoleonic Wars. Players use Event Cards and make decisions to increase their influence across the European continent.

Historically, we know that fate was not kind toward Napoleon and his armies, so the French player must play strongly at the beginning of the game. Although the British are formidable, there is room for France to dominate. In addition to gripping gameplay, Victory & Glory features a sublimely well-designed board and intricately illustrated event cards!

Get Victory & Glory: Napoleon from Noble Knight Games or check availability on Amazon.

#6. Nations in Arms: Valmy to Waterloo

Nations in Arms is an all-encompassing game that attempts to show Napoleon before he actually became Emperor. This game takes place from 1792 to 1815 and begins with early campaigns from Napoleon’s days as a simple Captain in the French Army.

Sometimes overlooked by other games, players can join with the future Emperor as he began campaigns across Italy in the late 1790s.

The game is designed for 2-7 players and boasts a playtime of over 3000 minutes, which can be broken down into smaller campaigns from the almost 20 years years of warfare.

Get Nations in Arms from Noble Knight Games or check availability on Amazon. 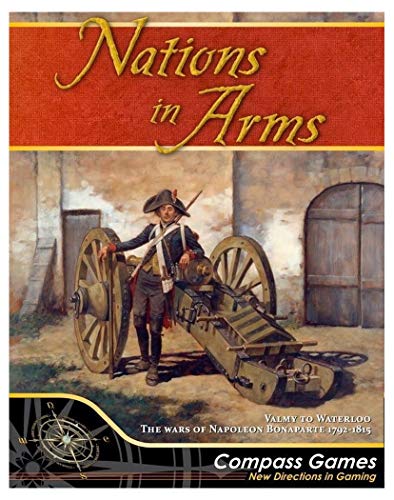 This is the first of the games on this list to include detailed miniature pieces representing the artillery, infantry, and cavalry, helping to mentally transport players to the battlefield. Game pieces even include the national flags of the army so they are easy to pick out for the onlooking generals.

The board itself shows Europe in the time of Napoleon and features different rules for beginners, mid-level players and advanced board game veterans. Players can choose to play as any of the major powers in Europe at the time, such as France, Italy, Austria, Prussia, Russia, Spain, and the Ottoman Empire. Each country begins the game with the same amount of troops that country had historically, which gives France and Russia the best starting advantage.

Countries can also be left open for the taking if not enough players are present, presenting a chance for smaller countries to create alliances, gain power, and eventually challenge the domination of France and Russia.

Although the British player is at a disadvantage based on infantry, British domination of the seas can be leveraged to play enemies on the continent off of each other and ferry troops to other locations. Anyone choosing Britain will build up their army slower than other countries.

Each turn represents one month and players can only move their troops within the mandated movement allowance. Cavalry can move twice as fast as infantry and artillery whereas naval forces can strike anywhere with a port. Political Action Points are gained by winning battles and wars and will help a player sue for peace, declare alliances, and ultimately claim mastery of Europe!

Get Napoleon in Europe on Noble Knight Games or check availability on Amazon. 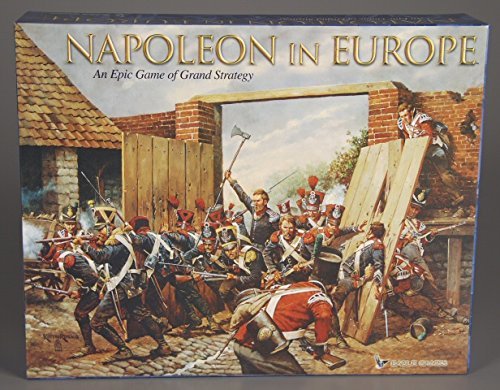 Much like the novel of the same name, War and Peace is an expansive game covering the most active decade of the Napoleonic Wars, 1805-1815. The game is divided into 10 scenarios including the famous events of the Battle of Austerlitz, 1805; the Invasion of Russia, 1812; and Waterloo, 1815.

While many Napoleonic War games vastly favor the British, this game gives numerous advantages to the French player and is recommended for 2-5 players. The British will win automatically if they come into control of Paris and the French will win automatically if they conquer London or if the rest of the continental countries are neutral or allied with France. There is no direct diplomacy in this game so players must use battle strategy to control Europe.

Get War and Peace from Noble Knight Games or check availability on Amazon. 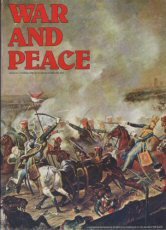 Soldier Emperor brings in aspects of the Napoelonic Wars that many games do not focus on, namely the various interventions by Persia into Russian territory. The game board represents this by stretching all across Europe, through Turkey and into Qajar Iran. North to South, the game includes campaigns in North Afriica all the way north to Norway.

The game is played by rolling dice to determine how battle points will be inflicted, in this step, having a good general at the helm can give the player serious bonus points. However, event cards are lurking in the shadows to dash asunder the most carefully laid plans of Europe’s generals. Dysentery, rebellions, soldier misconduct can strike at any time and deal crushing blows to the effected armies. The game ends when the players conditions for victory are met or on a predetermined round.

Get Soldier Emperor from Noble Knight Games or check availability on Amazon.

Known as The Emperor’s War in English, this game follows the general progression of the Napoleonic Wars from 1805 to 1815 and captures the moves of the shifting alliances that came to typify this era of European politics.

The French player must bank on France’s vast resources and Napoleon’s flamboyance and charisma to help win an alliance. The British player, France’s natural enemy, must use diplomacy and levy its powerful navy and overseas resources to counter French dominance on the European continent.

Countries have a chance to start neutral, but that will not last for long while the balance of power in Europe is swinging wildly from French to Russian to British control. Neutral countries have the chance to be snatched up by enemy powers or to engage in alliances in an attempt to beat back the aggressor.

This game also includes political and economic events, or rather, setbacks, which can derail the battle plans of the board’s generals. Rebellions can occur in Ireland, Lorraine, Bavaria, or Finland, all causing headaches for their respective overlords. 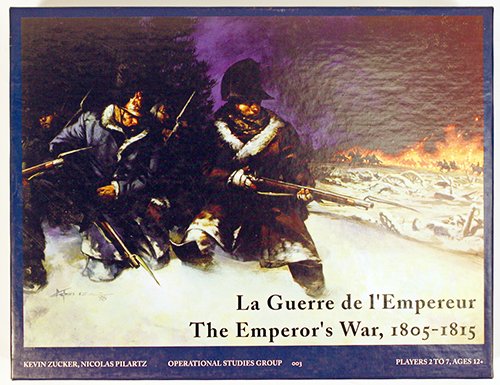 We hope you enjoyed our list of the best Napoleonic Wars board games! If you are a history buff and a board gamer, these games are the best of both worlds! Have you tried any of the games on this list? Did we miss any of your favorites? Drop a comment below and let us know what you think! We’d love to hear from you.