Best Board Games Under $100

If you’re looking for a board game on a budget, look no further! We’ve got a list of some of the best board games under $100 that will give you hundreds of hours of entertainment.

You don’t have to break the bank to take an epic adventure into the world of board games. On the list you’ll find various games with different mechanisms and themes that you can browse through, finding the one best suited to you.

Try out one of these games and get more bang for your buck!

🏆 Our Top Picks for Best Board Games Under $100

Landing on Mars is just the beginning… making it livable for humanity is a whole other challenge.

Terraforming Mars has been a dream for humankind, and now it’s become a reality. Corporations compete to tame the Red Planet and make it habitable. Technology, resources, and bravery will be needed to raise Mars’s temperature and create a livable atmosphere.

In Terraforming Mars, players take control of a corporation, looking to be the first to lead the way into a new era. The task of saving humankind is not an easy one. You’ll be initiating huge projects in order to raise the oxygen level and ocean coverage.

Players work together throughout the process of terraforming using play project cards to build cities and green areas on the map. There are also victory points up for grabs, which players will have to compete for. Advance infrastructure or perform brave, commendable tasks and you’ll find yourself ahead of other players.

Everdell takes you deep into the forests from Everfrost to Bellsong where peace has reigned throughout. But, like always, peace can not last as battles begin for new territories. There’s much to be done as you strive to settle on new lands.

Everdell is a worker placement game where charming little forest characters work to grow their settlement. From establishing new cities, constructing new buildings, and even holding important events, the lively forest is buzzing with change.

You’ll need to strategize how you’ll move forward using legend cards, rats workers, and lots of tokens. An added bonus is that the game costs under $100 but comes with gorgeous artwork and detailed wooden creature meeples.

The incredibly popular game, Arkham Horror remains a must-have board game that also comes with a reasonable price tag!

Set in 1926 Massachusetts, the city of Arkham is an abyss of mystery, peculiarities, and evil. A few brave investigators travel to the island in the midst of the black seas to struggle against the ancient evils that threaten the New England town.

Arkham Horror has players take on the roles of investigators cooperating as they work through mystery and terror. You’ll explore the streets of the city to stop occult rituals and defeat alien creatures. Find tools and gain allies to destroy creatures that have creeped out from beyond the veil of our reality. Each character has a unique back story that enables narrative paths making each scenario and each game truly your own.

If you’re a lover of H.P. Lovecraft, Arkham Horror, the board game is inspired by his writings.

Rightfully named, Spirit Island is full of powerful spirits that have existed on the island before mankind. Native islanders have respected and co-existed with the spirits, not doing anything to upset the powers of something beyond nature.

But, as always, colonists have invaded, claiming they’ve ‘discovered’ the island. And, predictably, they’ve bulldozed the natural balance of life, provoking the spirits as they go. Playing as the disgruntled spirits, you must source and grow your powers to drive the invaders far away from the island.

The game comes with lots of different components, such as invader and island boards, panels, cards, tiles, and pieces to move around. As you progress, the game escalates so card combinations and strategy are ever-important.

The War of the Ring has begun…

Based on J.R.R. Tolkien’s epic world, The Lord of the Rings, this board game gives Tolkienites the chance to experience the drama, action, and memorable characters from the books and movies.

As a strategy board game, War of the Ring starts off with the last free realms of Middle-earth coming together to lead the defense. Onslaught awaits the Free Peoples as Sauron’s evil minions fight battles in his name, all while the Fellowship of the Ring is led to the quest for Mount Doom.

War of the Ring also has the opportunity for one player to play as the Shadow player, working to lead the Dark Lord’s minions and bring darkness to all. Immerse yourself as you battle to overthrow your enemies.

In 7 Wonders Architects, players must balance building materials, civilization academics, and a military to create an awes inspiring world wonder. You’ll need to do what it takes to manage your civilization and create a truly mesmerizing wonder.

There’s a unique card drafting system where the decks are always facing up so the information is open to everyone, meaning you’ll either choose the card you need or choose a card another player needs.

7 Wonders Architects has easy-to-learn rules making it a great introductory game for beginners or young players. 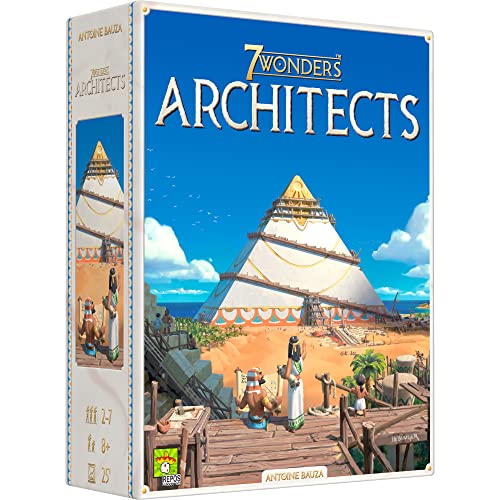 Another game inspired by the brilliant works of H.P. Lovecraft, Mansions of Madness takes you down grim alleys and mansions taken over by eldritch forces and unspeakable monsters.

Men have gone mad, cultists thrive, and terrifying monsters lay in wait. Only a few investigators venture through the mansion doors to fight the madness within the mansions.

As a fully-cooperative game, players work to discover strange secrets while trying to solve puzzles and battle the Ancient Ones. With four campaigns featured, players venture into dark rooms guiding their investigators across dozens of double-sided map tiles, trying to figure out what’s hiding behind each door.

The board game also comes with a free digital companion app that only adds to the ominous experience.

Wingspan is for bird enthusiasts. With a unique theme, this competitive card-driven game gives board game collectors a new and interesting game to add to their under $100 collection.

Researchers, ornithologists, bird watchers, and collectors seek to build a network of the most attractive wildlife preserves. Players work to build a chain of powerful combinations to grow their habitat. You’ll need to gain food tokens, ensure birds are laying eggs, and draw cards with hundreds of unique birds on them.

The cards are beautifully drawn and also a great way to learn about different birds around the world!

Wonder how you’d last in a pandemic? Season 0,1 and 2 of Pandemic Legacy will take you on a journey of pandemic and self-discovery through crisis.

Pandemic Legacy starts with a virus that could completely wipe out humankind. A team of players will have to try to save humanity as each month brings surprises and setbacks.

In these legacy games, some of your actions will carry over to future games so you’ll have to be extra careful with your decisions. Players will open up sealed packets to try to unlock the secret within the game. With only two chances to win each “month”, the game moves fast as characters face panic, mutating viruses, and riots.

A legendary game… Legends of Andor has players forge the fantasy, band together, and live the legend.

Your help is needed in the lands of Andor. As danger approaches from the mountains to the forest, enemies are attacking from all fronts, trying to take control of the castle of old King Brandur. Only you and your small band of fighters have the chance to defend the castle and defeat the enemies.

Legends of Andor is a cooperative board game where players live out the legendary tales of battle, adventure, and heroes. There’s much to be done to defeat your enemies like obtaining medicinal herbs, repelling the darkness, gathering gemstones, and uncovering grave dangers.

The board game offers 5 additional expansion packs that provide players the opportunity to explore the fantasy world further, but as a stand-alone board game, the characters and tasks are rich with adventures on their own.

Whether you’re looking to solve a mysterious mystery in Arkham Horror or seeing what it takes to conquer Mars in Terraforming Mars, these board games under $100 dollars won’t disappoint as you play them again and again.

Let us know which board game you’ll buy with $100 bucks or less. Drop a comment below. We’d love to hear from you!

Have a different budget? Check out these Board Games: