Ark Nova is a board game with a unique theme of creating a modern, eco-friendly zoo. Expand your habitats, bring in animals from all across the world and do so much more to make the most attractive zoo.

Euro game fans will immediately spot mechanics from other games in the genre, but Ark Nova also refines and uses them in a much better way than the original games did.

If you’re a fan of the genre, like the theme or a bit of challenge, Ark Nova may be an excellent addition to your collection of board games! 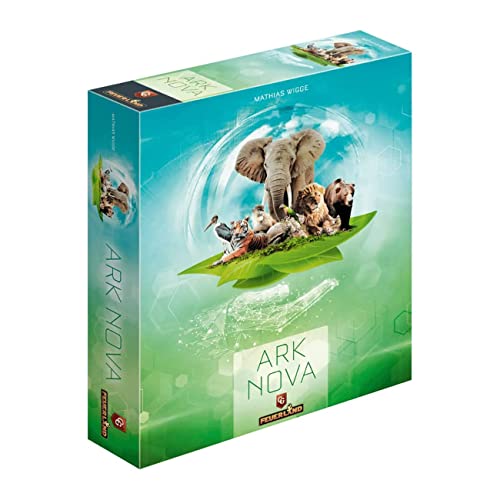 Ark Nova is a board game centered around creating a large zoo and an interesting collection of animals, but it also focuses on conservation efforts.

The theme works well with the Euro game formula and makes the game exciting and fun despite its 90 to 150-minute playtime.

It can be played with up to 4 people, but because of the low interactivity between players, 2-3 works better to speed the game up. The game also has a solo mode, which a lot of players appreciate.

The one thing to keep in mind is that Ark Nova is not really a family game, despite its theme and design. I wouldn’t say the game is too complex but think of it more along the lines of Terraforming Mars than an easy-to-learn family game.

With that being said, Ark Nova is considered to be one of the best games in the genre, ranking 6th in strategy games and 11th overall. It has become the go-to Euro game for many people, so let’s get into the review and see what makes Ark Nova so popular!

Ark Nova doesn’t have bad components by any measure, but if I were to pick its biggest weakness, it would have to be art and the color scheme.

The cards feature actual photographs of the animals, scientists, zookeepers, and buildings. I really dislike this approach, but at least Ark Nova did it better than Terraforming Mars in terms of photo quality and theme.

I’ve heard some people say that the photos give the game a dose of seriousness, and that drawn art would make the game appear more casual and cartoony. My counterpoint is very simple — take a look at the cards in Wingspan and tell me they don’t look far better than those in Ark Nova.

The rest of the components are also more oriented towards functionality than visual appeal. The game and the association board look a bit dull, with a poorly chosen brown covering most of it.

The artwork aside, the quality of components is really good. There is no plastic in the box — the tokens are either made of wood or thick punchout cardboard.

The player boards are a bit flimsy, but they work perfectly well when placed on the table. Even though it’s a 4-player game, there are 8 double-sided player boards for an easy, intermediate, or dynamic & advanced experience.

How to Play Ark Nova

Ark Nova plays a lot like other Euro games and uses a lot of mechanics you may have seen before. Terraforming Mars is the first one that comes to mind — if you’ve played it, you’ll immediately understand most of the Ark Nova mechanics.

Players will build their zoos on the large hex map in the center of the player boards. The goal is to play habitat tiles and fill the map up, allowing for more animals to join the zoo.

You cannot build on water or rocks, but some animals require a habitat next to these biomes. Additionally, the habitats have to be connected, so a lot of planning goes into setting up the best zoo layout.

Every player gets a set of five action cards to place at the bottom of the player board. The first card is always the Animal, but the rest are placed randomly.

The position of the card is important — the further it is on the card track, the better its effect will be. You can play any of the cards, and once you resolve its effect, you’d put it on the 1st spot, pushing the rest of the cards to the right. By holding off on performing a certain action, you can get it to higher positions and gain more from it.

There are 5 action cards in the game and they can be improved to improve their effect:

The cards action is straightforward and allows you to draw a specific number of cards to your hand. The three main card types in the game are Animals, Sponsors, and Conservation Project cards.

The build action allows you to build kiosks, pavilions, and standard habitats. The position of the action card on the track determines the maximum size of the habitat you can build and pay 2 money per hex.

Once you have habitats, you’ll want to populate them with wildlife. You can do so by taking the animals action and playing an animal card from your hand as long as you can fulfill the conditions.

The association action helps you raise your reputation, gain a partner zoo to source animals from, gain a partner university for various bonuses, and do conservation work. The sponsor action is mostly self-explanatory.

The Flow of the Game

In Ark Nova, there are no hard-set rounds. Instead, players take actions in clockwise order until the break token reaches the end of its track. The break token moves depending on the actions of players, so a “round” doesn’t have a fixed length and can end on any player.

Once the break has been initiated, players will discard down to the maximum card limit of 3 or 5 depending on upgrades, and take income and replenish the boards.

Ark Nova has the conservation and the appeal trackers that start on the far left side of the board, and travel along the edge to form a “U” shaped track. Should the two trackers meet at any point, the game ends.

The appeal tracker increases as you play animals, while the conservation track requires you to support conservation projects and release animals into the wild.

Your First Game of Ark Nova

You shouldn’t think of Ark Nova as a competitive game where every move matters and has to be planned out perfectly. While strategic moves definitely make a difference, you should approach the game with fun in mind and then figure out the strategies on your own.

I would recommend going for a large zoo with plenty of animals, just so you can get a feel for how it all works. The game opens itself up the most if you experience it on your own and try out different paths and tactics without the worry about final scoring.

That being said, the only worthwhile tip I should give you is to keep an animal or two in hand, so you can always have something to play into your zoo. You’ll notice that some animals have very specific requirements, but don’t focus too much on fulfilling these conditions if the cards aren’t going your way.

Apart from one mechanic, Ark Nova doesn’t do much in terms of innovative gameplay features. What it does exceptionally well is taking elements from other games and merging them into one amazing experience.

The two scoring trackers meeting in the middle, the river-style action cards, and the hex-based zoo layout have all been done before, yet Ark Nova still feels refreshing to play.

The one mechanic Ark Nova improves upon is the final scoring cards. Most games will give you a few cards and make you select one at the start of the game.

In Ark Nova, you get to keep both scoring cards until a certain point of the game, and only then will you have to make your decision. This is an excellent way to account for the randomness of the game and keep you from hard-locking yourself into one path while all the cards work against you.

The art direction and the color palettes are my biggest grudge with the game. I’ve never been a fan of photography used on cards, even though my favorite game uses them too.

However, Ark Nova takes it a step further with bland boards and functional, but uninspired card design. Striking a balance between visual appeal and practicality is always a challenge when you’re designing a Euro game, but the designers of Ark Nova stepped too far in the practical direction.

From a gameplay perspective, Ark Nova is near perfect, and I only have one minor complaint. The game can sometimes outstay its welcome, and towards the last quarter, you’re sort of just sitting there waiting for the game to end.

It’s not that you don’t have the stuff to do in-game, but that you’ve already achieved your goals and you’d just want to stop playing and tally up the scores.

Ark Nova is one of the best Euro games ever made and as long as the theme seems interesting to you, you can’t go wrong with picking up a copy.

If you have played Terraforming Mars, you’ll feel right at home with Ark Nova and get a similar, yet refreshing experience. Those that haven’t played many Euro-style board games should not be intimated by Ark Nova.

Even though there are a lot of mechanics, rules, and icons to memorize, once you’ve got a good grasp on them the game becomes very enjoyable and interesting. There are a ton of different starting points and paths to take, making Ark Nova much more replayable than other games in the genre.

For all the praise I’ve given Ark Nova, you’ll be surprised that my personal view of the game is not entirely in line with the review.

Ark Nova does a lot of things well as a Euro game. The action card system is excellent, and the way you expand the zoo and add animals works great, but the game just couldn’t capture me for a couple of personal reasons.

Many will find the theme to be quite interesting and synergetic with the gameplay, but it just didn’t hit the mark for me. At least with Wingspan, the amazing illustrations and small tidbit trivia were enough to keep me interested.

I can enjoy games of all genres and complexity, but my main requirement is that the game supports as many players as possible, but at least five. Ark Nova is a four-player game but the majority of players do not recommend playing it with a full party.

When I’m playing a game that can last as long as Ark Nova, I’d prefer to have more friends around the table to make the experience more social. This is completely my personal preference, but as some of you may think the same, I felt that it was an important point to make.

Ark Nova can be described as one of the best, if not the best games in its subgenre from a gameplay perspective. The art issues and player count aside, the game doesn’t suffer from any major problems. Even though I don’t like it as much as Terraforming Mars, I can still fully recommend it to all Euro game fans!

We hope you enjoyed our Ark Nova review! Have you tried this new Eurogame before? Let us know in the comments what you think or if you’re planning to give it a try. We look forward to hearing from you!