Above and Below Review & Board Game Guide

Your last village was pillaged and burned to the ground by a band of barbarians. But, not to worry. The new camp has turned out to be situated atop of a maze of underground caves, littered with treasures, resources, adventures, and some interesting characters…Read the full Above and Below Review below. 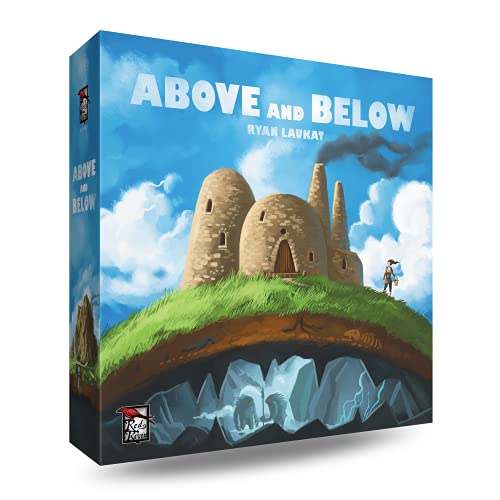 Brief Overview of Above and Below

Part worker placement, part engine-building, and part story-telling, Above and Below has lots of different concepts all rolled into one.

Your job now is to make a new life for yourselves, with your last village having been ransacked by barbarians. By designating actions to each of your villagers every turn, you must explore the deep caverns beneath you for resources, while at the same time find a place for them all to sleep.

Each exploration action will uncover all kinds of adventure in the depths below, which will be read out from the encounter book.

In the end, the points are tallied up, and whoever has built the most successful society wins.

Above and Below has no expansions, but it does have a sequel: Near and Far. This time you take on the role of four explorers searching for a lost ruin. On your mission, you’ll recruit adventurers, hunt for treasure, and compete to be the most storied traveler. There’s certainly plenty to keep you busy.

There is a bigger focus here on story-telling than in Above and Below. Overall, aside from sharing a few similar mechanics, it’s very different from its predecessor. 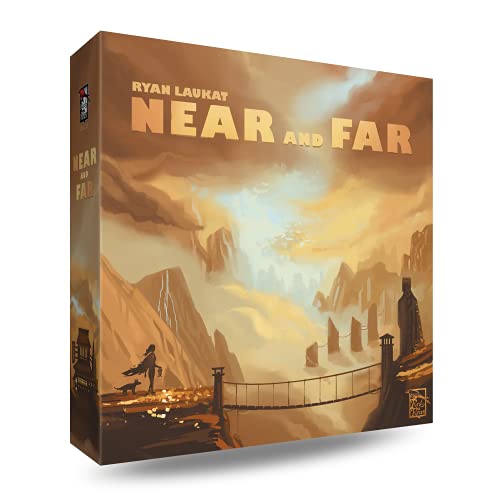 Unboxing Above and Below

Above and Below comes with the following:

Above and Below has some lovely artwork. The main box is very colorful with the big blue sky and green mountains contrasting nicely with the dark caverns below. The charming artwork uses broad brushstrokes that add a pleasant calmness to its appearance, a nod to the pacifist nature of the game.

The same artwork is used throughout and adds nicely to the mood of the game. The different villagers all look on stoically from their individual cards, somewhat surprisingly given the hard graft they’ve gone through to get here. In fact, if there’s one area that disappointed when it comes to artwork, it’s the characters. There are some cool dudes in there – the frog guy and Liquid Woman for starters – but the placid expression on their faces just makes them seem quite vacant.

But that’s not a huge issue. The design and quality of the components are top-notch, with thick player boards that will easily see through many years of regular play. The cards, in particular, stood out, using beautiful bold colors that look great when on your player board.

There’s also a lot of tokens, which can get a little fiddly once the game gets going, but on the whole, everything’s laid out well, with clear symbols and plenty of space.

The encounter book is nice and chunky, too, which is where all your adventures are hiding!

How to Play Above and Below

Players start the game with a player board, some coins, three villagers, and a starting house card.

Lay out the starting house cards on the table, and place four random key house cards beneath them.

The game has seven rounds. Each round, players assign actions to their villagers in turn. Once a player doesn’t want to do any more actions, they pass. When every player has passed, you begin the next round.

During these rounds, you will grow your village on your player mat in order to earn points. You can do this by putting goods onto your Advancement Track, building structures, and having the highest reputation, among other things.

At the end of the seven rounds, you count up the points, and whoever has the most wins.

Your villagers are represented by cards that are home to a number of symbols that show the strengths and abilities of each villager. To build something or train a new villager, for example, you will need to have a hammer or quill symbol, respectively.

It will also show two dice symbols next to a number of lanterns. These denote how successful your villagers will be in completing encounters when exploring.

One of the main and most exciting actions you can take as a villager is to explore your cavern. To do so, pick a minimum of two villagers and draw a cave card. The cave card will tell you which section to read in the Encounter Book, determining what adventure your villagers will find themselves on. They could, for example, end up surrounded by hungry rodents, meet some interesting cave-dwellers that need help, or find a rope to who-knows-where.

You then have to make a choice on how to proceed. The more difficult options will have bigger rewards, such as coins or mushrooms. While you’ll also gain or lose reputation points based on the morality of your decision.

Success at your chosen task is determined by rolling a dice for each villager and trying to score lantern points. Each villager will have a different number of lanterns they return based on what you roll (for example, one villager might return two lanterns if you roll a three. Another might only return one).

If successful, you gain your rewards and the cave card, which can be used to build an outpost.

You can also spend a villager to perform the following actions:

When all players have passed, the round ends. At this point, you gain coins from your position on the Advancement Track, and from buildings with the income symbol.

Then you must rest your villagers. To do so, count the number of bed symbols you have on your house and outpost cards. Failing that, you can also use potions or cider resources to rest your villagers. Any villager that is unable to rest won’t be available to be used next turn. You will spend a lot of time making sure you have enough beds!

At the end of the seventh round, the game ends and the points are tallied up.

Your First Game of Above and Below

You can also add multiple of the same resource onto the same space. At the end of the game, you will get points for every resource you have on the track.

Just bear in mind, once a resource is on the track, it can’t be removed!

Players can win and lose reputation during encounters, moving their pawn up and down the Reputation Track as they do. At the end of the game, whoever is higher up the track gets more points.

Alongside the normal villagers you can use, there are a few ‘special’ villagers available, too, that can only be acquired through certain encounters. Glogos, for example, can build structures for one less coin than a normal villager. While Metal Man doesn’t need a bed to rest.

They’re not all good, though. Take the creepy Liquid Woman. Her awkward presence loses you one reputation.

Above and Below is a charming and thought-provoking mix of worker-placement, engine-building, and story-telling. I loved the snippets of stories sprinkled throughout the game when you go exploring. These encounters act as wonderful side-dramas that bring your village to life, zooming in on the people that actually live in and populate it. It contrasts with many other settlement-building and worker placement games that, by their very nature, disconnect you from the workers themselves as you sit high above the board dictating which pawn does what.

The story-driven encounters also present some of the more grueling decisions to make in the game. At their core, the dice-roll mechanic that determines the outcome is a simple calculation of risk and reward. But the added drama the encounter book adds on makes it so much more than that. Do you abandon the poor lost cave dweller to fend for himself? Or put your expeditionary party at risk by helping him? The added effect this has on your reputation means even the amoral among us have to think hard.

Could be more developed

That said, I actually found the story-telling side to be a little bit limited. Once you complete an encounter, that’s the last you hear of it. Instead, I would have appreciated the story arcs having more of an effect on your overall strategy and village. Perhaps some card-crafting could be introduced to spice up your villagers based on their experiences underground, or you could unlock special items (similar to special villagers). This could be easily rectified in an expansion.

Above and Below, though, is ultimately a worker placement and engine-building machine. There simply is never enough workers to do everything you want to do, and you’ll be constantly having to choose between a big instant payout or more long-term effects. Nowhere is this more apparent than in the never-ending battle to find more beds!

It isn’t the most in-depth example of this kind of game out there, however – most actions are quite one-dimensional (do this, get that). While the dice-rolling element won’t be for everyone. However, this relatively light level of complexity keeps the game moving smoothly, and it still gives you plenty of decisions to make and strategy to mull over.

Above and Below Review (TL;DR)

Above and Below is a worker placement and engine-building game with a load of story-telling thrown in. As you build your village above ground, your villagers will be sent out on exploration missions to explore the caverns below for riches.

It’s a game fraught with all the decision-making and sacrifices you’d expect from the genre, but with the added drama brought in from the different scenes you have to play out as your village expands.

The balance of the three key mechanics means none of them quite pack a full punch, but the combination itself makes for a unique and incredibly enjoyable experience for gamers at all levels.

Above and Below is a great blend of story-telling, engine-building, and worker placement mechanics, while also pitching itself incredibly accessible. This makes it a neat option for a mix of different gamer types and abilities.

If you’ve ever found yourself feeling a little detached from a faceless settlement/civilization engine-building game, Above and Below fantastically flips that on its head, adding in a sense of ‘people’ to the decisions you have to make. And boy, do those decisions come thick and fast.

Where it lacks is that it spreads itself a little too thin by trying to be all things to all people. It’s good at lots of things, but not the best at any of them. But this shouldn’t put you off. It’s a thoroughly enjoyable game and its unique mix of each mechanic is what makes it special. Had it decided to go any deeper with any element, Above and Below would become a much more complex beast, likely losing its flow and charm in the process.

Have you tried Above and Below? We’d love to hear your thoughts on this game. Drop a comment below and let us know!