What can you achieve in five minutes? You could make a sandwich. Have a quick walk ‘round the block. Perhaps even tidy up your computer’s desktop (seriously, it’s getting out of hand now).

Or, if none of those take your fancy, you could heroically break out of a dark, monster-infested dungeon! Read the full 5-Minute Dungeon Review below. 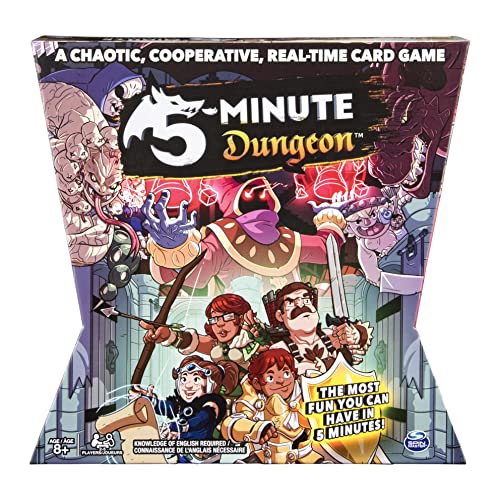 5-Minute Dungeon is a co-operative card game for two-to-five players in which you have five minutes to find your way out of a dungeon. On your way, you’ll come up against all sorts of monsters and characters trying to stop you. If you make it to the very end, you must also defeat the boss before you can escape.

To be able to defeat monsters and move through the game, players match symbols on their cards to the symbols on the door they’re trying to open. There are no turns, so players can play cards at any point they like. But you won’t be able to do it on your own. Instead, you must work together to find the right combinations and make it out of the dungeon.

You have to be quick, though. If you fail to get out of the dungeon in five minutes, then it’s game over.

The only expansion for 5-Minute Dungeon is ‘Curses! Foiled Again!’. This bulks up the original components with the Druid and Shaman heroes, new boss cards, and various other events and action cards. The addition of the new heroes also means you can now play with six players, rather than just five. 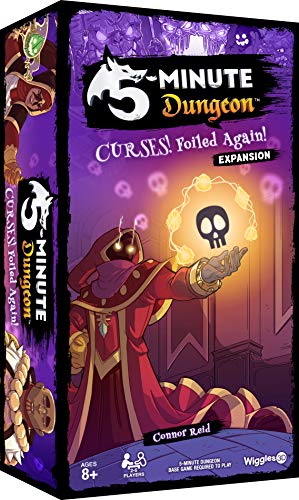 This version takes the original and puts a Marvel spin on it. It works just like the base game, but instead, you’ll be playing as one of ten Marvel heroes, with six Marvel villains to try and defeat. 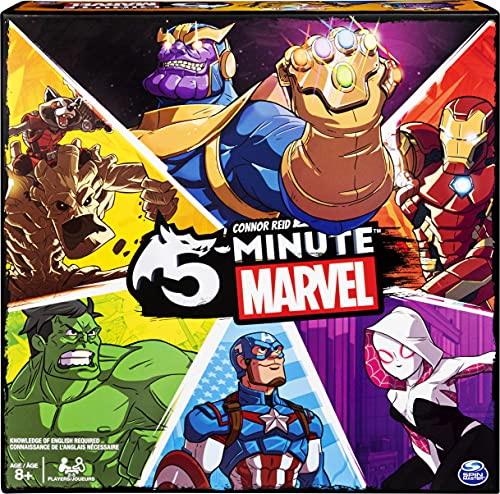 5-Minute Dungeon is a simple game, with not too many components to get your head around. You’ll get:

The first thing you’ll notice about 5-Minute Dungeon is the shape of the box. It’s like a normal square box but squeezed in the middle. It, I presume intentionally, gives it a kind of hourglass shape, hinting at the nature of the gameplay.

I like it a lot, setting up nicely the quirky character throughout the game and artwork. Also, unlike several other games with ‘interesting’ box shapes, it still stacks nicely alongside your other normal box-shaped games.

The artwork on the box is also quite distinguished. Teeming with heroes and monsters you’ll find in the game, they’re animated brilliantly – each with real strength of character bursting through.

I found the manual to be quite oddly laid out. For such a simple game, there was quite a bit of back and forth that didn’t seem especially intuitive. But, such is the simple nature of the game, we were still able to get the hang of it almost instantly.

In terms of components, everything is of fantastic quality. The hero mats and boss mats have great animation and are nicely designed. Again, they do well to bring out the character of the hero or boss they relate to.

The cards, importantly, are good quality, too. These are going to have quite a rough time of it as players throw them about in a panic. But, thankfully, they are made of sturdy stuff. They’re also designed to be easily read from afar, with clear bold colors to ensure the game runs smoothly.

How to Play 5-Minute Dungeon

Players choose a hero to play and take their corresponding hero mat and deck of cards. Shuffle the deck and put it on the draw pile space of the hero mat. Draw your starting hand from the deck – this is five cards in a two-player game, four in a three-player, or three in a four, five, or six-player. Hero decks are made up primarily of sword, arrow, shield, jump and scroll resource cards, along with special action cards.

Then you need to build the dungeon deck. To do so, choose the boss you want to challenge and take the number of dungeon cards stated on the boss mat. Finally, add in two challenge cards per player, and shuffle them together.

The game takes place against the clock. When you start, begin the five-minute countdown timer (there’s an official 5-Minute Dungeon timer app you can download for this if you like).

Then, turn over the top card of the dungeon deck. Each dungeon card represents a part of the dungeon and will contain some kind of dastardly character trying to stop you from escaping.

To resolve it, players must combine to play resource cards that make up the symbols on the dungeon card. For example, you need to play two sword cards and one arrow card to defeat the ‘Ghost’. Once your team has played what is needed, you turn over the next dungeon card and try again.

Bear in mind, there are no turns in 5-Minute Dungeon. Players simply throw their cards down on the table in a dungeon frenzy. And remember, when you’ve played a card, refill your hand from your hero deck.

There are some special cards you’ll come across, too. In the hero deck, you will find action cards. These are special powers that can could, for example, defeat a monster or pause the timer for a bit.

You will also come across event cards in the dungeon deck. These will require you to perform some kind of action, such as discarding your whole hand, and are generally a bit of a pain.

Every hero has an individual special ability that can be used by discarding three cards from your hand. Take the Barbarian. He can defeat any monster card that you come up against. While the Valkyrie can enable every other player to pick up two extra cards.

Once you’ve worked your way through all the dungeon cards, players must face the final boss. This works in largely the same way. If you fail to defeat the boss before the time runs out, you lose. If you defeat the boss within the time limit, you win.

At this point, if you like, you can choose to continue your adventure onto the next dungeon. These increase in difficulty as you progress – starting out with the Baby Barbarian, and ending up at the Dungeon Master.

Your First Game of 5-Minute Dungeon

5-Minute Dungeon is a fast-paced game. Often, players will throw cards down without stopping to discuss with the rest of the team – you’re under time pressure, after all. This can mean that sometimes cards get played unnecessarily. Be careful here, as once a card leaves your hand you can’t take it back, even if you’ve already filled the quota.

That said, you can use this as an opportunity to rid your hand of cards you don’t want and pick up other ones. If you’re stuck on a door card, for example, this might be the only way to get the resource cards you need.

You can only get away with doing this so many times, however, as otherwise you risk running out of cards. Once they’re gone, they’re gone. That is unless a fellow dungeon explorer can help you out with a special ability or action.

After a couple of games, I’d also recommend one of your team to play as the Wizard hero, whose special ability is to pause the timer. That’s because, now that you’ve got a feel for the game, this will give you a chance to coordinate tactics and form a more long-term strategy. Or, if playing with kids, give them a helping hand without undermining the rules of the timer.

Finally, remember that the only way to really get a handle on the chaos that is 5-Minute Dungeon is good communication. Don’t just shout out what you’re putting down. It can confuse your teammates as they look at their hands. Instead, maybe think about shouting “Does anyone have an [x]?”.

The magic of 5-Minute Dungeon comes from the timer. It creates frenzied chaos that can bring out the worst in many of your friends as they scream and slam down cards, likely putting a permanent fold mark in some of them as they do so.

Without this sense of impending doom, 5-Minute Dungeon would be a very bland game. But sometimes, all you need is a ticking timebomb in the background to get the excitement flowing.

I’d really recommend downloading the official timer app, as well. Sure, you probably have a timer on your phone already, but it’s honestly worth it. Along with enriching the theme with sound effects and background music, it also occasionally calls out how much time you have left, adding to the tension around the table.

The simplicity of the game rules means this is a great option for playing with kids. They’ll have no trouble getting to grips with it after one game, and the different special abilities are easy to understand, as well. I actually really like that the designers didn’t feel the need to add in a whole load of different rules and card types. Instead, the focus here is on speed, quick thinking, collaboration, and communication.

And collaboration really is central to winning 5-Minute Dungeon. Teamwork is essential, as it is impossible to win on your own. It naturally creates a wonderful sense of camaraderie among the players around the table as you link up and form combinations under pressure.

Of course, with simplicity comes the potential for some gamers to feel like it has a lack of replayability or depth. The different combinations of heroes and randomness of the dungeon do mix things up.

But ultimately, after quite a few plays – which won’t take long when each round is a maximum of five minutes – things will start to get a little repetitive.

Also, if you like a game that focuses more on strategy, the rush of the timer might prove to be a bit frustrating. But, to be honest, it’s unlikely you’ve got this far if you’re only really into more complex dungeon-crawlers, anyway!

5-Minute Dungeon is a co-operative card game in which – you guessed it – your team has five minutes to get out of a dungeon.

It’s a crazy, energetic, and high-intensity game, in which its freestyle gameplay and countdown timer make for a chaotic few minutes.

There isn’t a lot of strategy going on here. But the collaboration, communication, and speed required to win make it an incredibly fun experience. The official timer app that you can download, too, is a great addition.

5-Minute Dungeon is a blitz of activity that will be over before you’ve managed to even get through a rendition of Bon Jovi’s ‘Dead or Alive’. Its noisy, free-for-all gameplay will make a nice change on any game night as a break between more complex games. Or, quite simply, an excuse for some controlled carnage.

The tension and excitement that builds as the timer ticks down – and the sense of kinship among players – is hard to match in games that share this level of simplicity.

That sense of accomplishment and relief when you slam those final cards down on the table emulates those grueling last moments of an intense game of Dobble. Just, this time, your whole group gets to share in it.

Sure, you aren’t going to have your strategic socks blown off. But I challenge you to find a game that is over in five minutes that can create as much drama as 5-Minute Dungeon.

Hope you enjoyed our 5-Minute Dungeon review! We’d love to hear your thoughts on the game. Drop a comment below!